Tecumseh and Trump: American Men off the Reservation


"I have a lot of experience dealing with men who sometimes get off the reservation in the way they behave and how they speak."
(Hillary Clinton on CNN, April 2016)


"I mean. All of the men were petrified to speak to women anymore. "
(Donald Trump in Spokane, May 2016) 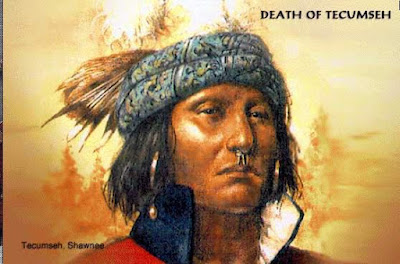 The great Shawnee leader, Tecumseh, was admired by friend and foe alike for his forthright speech and his vision of uniting different warring tribes into a single spiritual union of countrymen. He had seen how tribal divisions stoked all the wrong enmities, while the white establishment moved relentlessly westward and swallowed the land of the divided red men. His brother, "the Prophet," was the spiritual visionary while Tecumseh was the warrior leader who tried to put together a new configuration of alliances to save his country.  The hope for a spiritual revival to unite American Indians died at the Battle of Tippecanoe (1811) when the prophet was discredited. Tecumseh, however, had one more alliance to propose. He bonded with his British warrior compatriot Major-General Isaac Brock in the War of 1812. They defended Canada from American encroachment, but never established a free nation for the Indians west of the Great Lakes.

Today, Sir Isaac Brock and Tecumseh are considered heroes of the Canadian nation. They both died in battle. There would never again be a serious threat of a united Indian front to stop the American drive west. It would be the white American men who would build larger and larger circles of countrymen under the Father in Heaven to unite as a single people. As the territory expanded and the centuries passed, their shared duty as countrymen was still masculine and territorial but no longer restricted by color.

Tecumseh has been honored by American patriots and fighting men since his death. Sports teams and certain kinds of political leaders admire the martial loyalties and bravery they know is necessary for a team to win and a nation to survive. Since the Irish Democrat John Kennedy, no American President has spoken in Tecumseh’s civic masculine language of "fellow countrymen." Not all leaders of tribe or nation speak in this tongue. The first two early presidents who spoke that way were Washington and Jackson. Intellectuals and party men who populated the early Republic loved Washington, but they despised Andrew Jackson. It takes a lot to get the bookish men to grant the warrior or builder his due. But men whose political loyalties have not been professionalized recognize the common call of male leaders. Andrew Jackson did not please the Washington establishment, but his electoral victories in 1928 and 1932 were landslides. The so-called "dog whistle" that a man can sound in the manner of his speech and walk is a primal call of the territorial patriot. In our day it should not be confused with racism, for it evokes a national brotherhood that is actually an antidote to racism and the answer to our urban problem of male socialization.


The rich white squaw of the past chief -- she who tried eight years ago to prevent the first black man from winning the  presidential office -- is having a nightmare. She is recalling her last overreach. Donald Trump is not the "dog who couldn’t stay on the front porch" like her old chief.  She "had a lot of experience" handling that caricature of manhood.

Donald Trump is much more like that outsider man of 2008 who challenged her narrative of female entitlement. Once again a man and his many, many brothers are off the reservation.