Country of the Week: CHINA

The longest river in China is the Yangtze, beginning in the far western Plateau of Tibet and emptying into the East China Sea just north of Shanghai. It has plenty of rainfall all year round. The most impressive section of the river's 4,000-mile course is the gorges -- stunning precipitous valleys. The Three Gorges Dam, completed several years ago despite social and environmental upheaval, has increased the shipping capacity of the river.

The Yangtze Delta by Shanghai has its own problems; it has been called "the biggest cause of marine pollution in the Pacific Ocean." 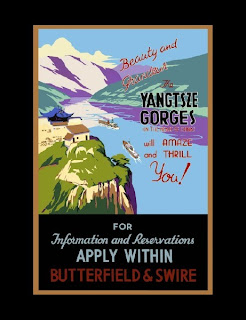 The second longest river, the Yellow ("cradle of Chinese civilization"), has always had a high silt concentration; in its lower reaches it is essentially a river of mud. Nowadays it is very polluted as well. The Yellow River ends about 120 miles southeast of Beijing -- its course is much farther north than the Yangtze. 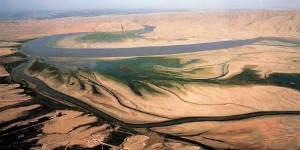 In other words, the Yellow River traverses a region with far less rainfall -- close to the expanding Gobi Desert and subject to droughts. The underground aquifers are no longer sufficient to supply Beijing and the rest of the nearly 500 million residents of the north China plain. A story last month in the 'NY Times' began: "North China is dying."

Almost a third of the land in China is desert, and the rapid industrialization may greatly increase that figure. The per capita water volume is only 1/4 of the world average.

The South/North Project is a massive government effort to divert water from the Yangtze to the Yellow River. One of the ways they will do this is to upgrade the Grand Canal. (Sections of it were built long before the birth of Christ; today it covers more than a thousand miles).

Two troubles which are slowing the South/North diversion project: environmental worries and escalating costs -- so far, twice as much as the massive Three Gorges project.

Take a look at this physical map of China.

Also a map of the Grand Canal showing how it connects the two big rivers and where they empty into the sea.

Below is a statue of the Italian Jesuit missionary Matteo Ricci who used the canal on his way to Beijing in 1598, and wrote: "So great is the number of boats that, frequently, many days are lost in transit by crowding each other, particularly when water is low in the canals... During the hot summer season much of the foodstuffs, which are perhaps a month or two in transportation, would spoil before reaching Beijing, so they are kept in ice to preserve them."

(Father Ricci was the first Westerner to be invited into the Forbidden City. He established the Cathedral of the Immaculate Conception, the oldest Catholic church in Beijing.) 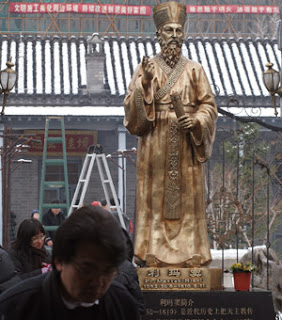 [In America we are used to saying "south-west" or "north-east," but in China they put the east or west first -- for instance, "east-south" or "west-north."]
Posted by Farmer at 8:41 PM