Flannery was one wise country gal 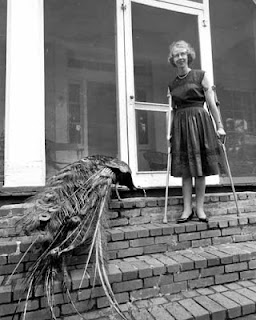 I asked Doc Pence for his reaction to some comments of the great Catholic writer, Flannery O'Connor, who died of lupus in 1964 [his words are in italics]:

"Our age not only does not have a very sharp eye for the almost imperceptible intrusions of grace, it no longer has much feeling for the nature of the violences which precede and follow them.  The devil's greatest wile, Baudelaire has said, is to convince us that he does not exist.”


There are two insights here.

One from the novelist who reminds us there is a major character missing in the modernist story. I am learning to substitute conversations about policies and practices (like the male priesthood and heterosexual marriage) with a comparison of notes about who we think is on stage with us.

It turns out an accurate and more complete listing of the dramatis personae – the players in the drama – is the fighting point of stasis where we should contend with the modernists. The characters most often missing are the fallen Angel – Lucifer, and the first Man – Adam.

Secondly, she reminds us that moments of grace are often preceded and followed by other less friendly spiritual movements.  This is the only adequate explanation of the terrible hijacking of two great civic and ecclesial religious events of the last century: the American civil rights movement and the Second Vatican Council. Those two workings of the Spirit have been twisted by another Force. Herod has had his murderous day, but he will not kill the baby. A resurgence of grace will eventually yield the fruits of these movements. But we cannot deny O’Connor’s insight – at every wisp of grace the devil wants his due.


"I suppose the reasons for the use of so much violence in modern fiction will differ with each writer who uses it, but in my own stories I have found that violence is strangely capable of returning my characters to reality and preparing them to accept their moment of grace.  Their heads are so hard that almost nothing else will do the work."


Does it take these one-day rampages of mass murderers to wake us up? Miss O’Connor certainly thought that was true in novels. They say difficult cases make bad law but it may be that conversion demands the grotesque. It took some pretty terrible deeds to turn Pharoah’s heart and, even then, only for an instant.

"It requires considerable grace for two races to live together, particularly when the population is divided about 50-50 between them and when they have our particular history.  It can't be done without a code of manners based on mutual charity.  I remember a sentence from an essay of Marshall McLuhan's.  I forgot the exact words, but the gist of it was, as I recollect it, that after the Civil War, formality became a condition of survival.  This doesn't seem to me any less true today.  Formality preserves that individual privacy which everyone needs and, in these times, is always in danger of losing.  It's particularly necessary to have in order to protect the rights of both races.  When you have a code of manners based on charity, then when the charity fails – as it is going to do constantly – you've got those manners there to preserve each race from small intrusions upon the other."

Manners, morality, civic charity and the nature of public life are all deeply related. Her emphasis here is the role of manners in keeping peace between the races in the South. I would say there is some similar problem today in employing manners to bring the natural protective order of adult authority back as a vivid daily experience. The public agreement of men who do not know each other’s name but recognize one another as fellow protectors (the basis of citizenship and masculine civic friendship) manifests itself in rituals of gestures and greetings to one another, to women and to younger males. The first school of such manners is the form of liturgical actions in religious gatherings.

"The Hebrew genius for making the absolute concrete has conditioned the Southerner's way of looking at things.  That is one of the reasons why the South is a storytelling section.  Our response to life is different if we have been taught only a definition of faith than if we have trembled with Abraham as he held the knife over Isaac.  Both of these kinds of knowledge are necessary, but in the last four or five centuries, Catholics have overemphasized the abstract and consequently impoverished their imaginations and their capacity for prophetic insight.


"Nothing will insure the future of Catholic fiction so much as the biblical revival that we see signs of now in Catholic life.  The Bible is held sacred in the Church, we hear it read at Mass, bits and pieces of it are exposed to us in the liturgy, but because we are not totally dependent on it, it has not penetrated very far into our consciousness nor conditioned our reactions to experience...


"We Catholics too much enjoy indulging ourselves in the logic that kills, in making categories smaller and smaller, in prescribing attitudes and proscribing subjects.  For the Catholic, one result of the Counter-Reformation was a practical overemphasis on the legal and logical and a consequent neglect of the Church's broader tradition.  The need for this emphasis has now diminished, and the Church is busy encouraging those biblical and liturgical revivals which should restore Catholic life to its proper fullness.  Nevertheless the scars of this legalistic approach are still upon us.  Those who are long on logic, definitions, abstractions, and formulas are frequently short on a sense of the concrete..."


This great insight was a driving force of Vatican II. The Council held up the presence of Christ amidst the world – not as the conclusion of a philosophical argument, not as special friend with whom every man makes his separate peace, but as the Head of a living body acting sacramentally throughout the world in particular lands in this particular time.  The Council itself substituted the language of biblical personalism for the philosophical categories. This was not in any way a rejection of the rigor of philosophy; but there is a 'rigor mortis' and a 'rigor vitae' – and Miss O’Connor and the Holy Spirit at the Council purged the rigor mortis.

The Council was a living icon in a place at a time marked by 1) the collegial experience of  fraternity among 2000  bishops under the office of Peter; 2) the recognition of the liturgy as the unifying life-giving actions defining the Church; 3) a new public manifestation of the Church’s renewed historical self consciousness as an apostolic body. This presence cast off any claim to temporal power, but projected an even more dramatic presence as a continued apostolic fraternity participating in the biblical narrative of history as the light to the nations. The two great world wars which mocked the fractured public church with the armed atheism of the Nazis and Soviets were answered with the reappearance of those two great biblical actors: the armed nation of Israel, and the ‘light to the nations’ -- the evangelizing Apostolic Church.

On a less dramatic note, O’Connor’s lesson must also be pondered by the thin-chested orthodox intellectuals who have eviscerated the discussion of natural law from the ordering of the world by a Living God to the verbose tracts of university professors in praise of their own reason. The same chastisement is due the Catholic political philosophers who explain public life and citizenship in tome after tome but never evoke armed men disciplined by God, courageous leaders bound to other men by law, and the fraternal friendship of shared territorial protective duty. Natural law with no Living God ordering nature and history, and Political Philosophy with no men ruling and fighting for their nations – these are the abstractions that Miss O’Connor criticized. She was never pleased with either atheism or emasculation.

Let's end with the Lady:
"If you live today you breathe in nihilism. In or out of the Church, it’s the gas you breathe… I think that the Church is the only thing that is going to make the terrible world we are coming to endurable… If you believe in the divinity of Christ, you have to cherish the world at the same time that you struggle to endure it… It is easy to see that the moral sense has been bred out of certain sections of the population, like the wings have been bred off certain chickens to produce more white meat on them. This is a generation of wingless chickens, which I suppose is what Nietzsche meant when he said God was dead."        (Flannery O’Connor)