Those are the words of writer E.B. White. 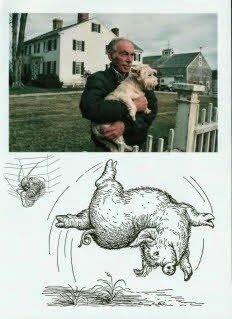 It's fascinating to read the opening pages of Charlotte's Web -- written some twenty years before the Supreme Court's abortion decision:


"Where's Papa going with that ax?" said Fern to her mother as they were setting the table for breakfast.
"Out to the hoghouse," replied Mrs. Arable. "Some pigs were born last night."
"I don't see why he needs an ax," continued Fern, who was only eight.
"Well," said her mother, "one of the pigs is a runt. It's very small and weak, and it will never amount to anything. So your father has decided to do away with it."
"Do away with it?" shrieked Fern. "You mean kill it? Just because it's smaller than the others?"
Mrs. Arable put a pitcher of cream on the table. "Don't yell, Fern!" she said. "Your father is right. The pig would probably die anyway."
Fern pushed a chair out of the way and ran outdoors. The grass was wet and the earth smelled of springtime. Fern's sneakers were sopping by the time she caught up with her father.
"Please don't kill it!" she sobbed. "It's unfair."
Mr. Arable stopped walking.
"Fern," he said gently, "you will have to learn to control yourself."
"Control myself?" yelled Fern. "This is a matter of life and death, and you talk about controlling myself." Tears ran down her cheeks and she took hold of the ax and tried to pull it out of her father's hand.
"Fern," said Mr. Arable, "I know more about raising a litter of pigs than you do. A weakling makes trouble. Now run along!"
"But it's unfair," cried Fern. "The pig couldn't help being born small, could it? If I had been very small at birth, would you have killed me?"
Mr. Arable smiled. "Certainly not," he said, looking down at his daughter with love. "But this is different. A little girl is one thing, a little runty pig is another."

Email ThisBlogThis!Share to TwitterShare to FacebookShare to Pinterest
Labels: The Human Organism