Dec 8th -- IMMACULATE CONCEPTION: She who is the greatest instrument of the Holy Spirit

In a pure act of mercy and grace God called Mary into existence free of original sin  to be the new Eve. This truth was long held by Christians, but formally acknowledged by Pope Pius IX in 1854.

Amidst these years of too many corrupted churchmen, it is no coincidence that the two infallibly declared papal dogmas of the last two centuries  define the spotless beginning and the incorruptible end of Mary’s life when she shattered the ultimate glass ceiling. These truths remind us that at her core the Apostolic Church is Marian, and she hath not sinned. It is a singular gift to the Catholic imagination that we have a feminine beauty to inspire our poems, our songs, and our prayers. Her ever-pure life cleanses the mind that contemplates her. Our understanding of Mary is a school in which we learn to understand our own human nature. For those of us who love her, humans are never by nature either neutered or depraved.


"Mary Immaculate, star of the morning,
Chosen before the creation began,
Chosen to bring in the light of thy dawning,
Woe to the serpent and rescue to man.

Here, in this world of both shadow and sadness
Veiling thy splendour, thy course hast thou run:
Now thou art throned in all glory and gladness,
Crowned by the hand of thy Saviour and Son.

Sinners, we worship thy sinless perfection;
Fallen and weak, for thy pity we plead:
Grant us the shield of thy sov’reign protection,
Measure thine aid by the depth of our need.

Bend from thy throne at the voice of our crying,
Bend to this earth which thy footsteps have trod:
Stretch out thine arms to us, living and dying,
Mary Immaculate, Mother of God." 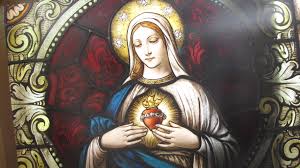 On this feast of the Immaculate Conception, here is part of a prayer by Saint Maximilian Kolbe:


O Immaculata, Queen of Heaven and earth, refuge of sinners and our most loving Mother, God has willed to entrust the entire order of mercy to you…

For wherever you enter you obtain the grace of conversion and growth in holiness, since it is through your hands that all graces come to us from the most Sacred Heart of Jesus.

V. Allow me to praise you, O Sacred Virgin.

R. Give me strength against your enemies. 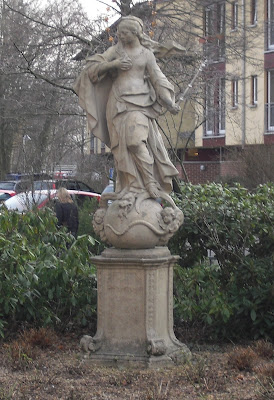 Father Kolbe organized his spiritual Militia in fealty to her who "cometh forth as the morning rising, fair as the moon, bright as the sun, terrible as an army set in battle array" (Song 6:9).

"O Mary, our mother,
today the People of God feast in hailing you as Immaculate,
preserved forever from the contagion of sin.
Receive the homage I offer you in the name of the Church
that is in Rome and across the whole world.

To know that you, who are our Mother, are totally free from sin
gives us great comfort.
To know that, over you, evil has no power, renews our hope and strength
in the daily struggle that we must undertake
against the threats of the evil one.

But in this fight we're not alone, we are not orphans, because Jesus,
before dying on the cross,
gave you to us as our Mother.
We, then, while being sinners, are your children,
sons and daughters of the Immaculate one,
called to that holiness which shines in you from the beginning by God's grace.

Enlivened by this hope,
we today seek your motherly protection for us,
for our families, for this city, for the entire world.
May the power of God's love, which preserved you from original sin,
through your intercession, free all humanity from every spiritual and material slavery,
and make victorious, in our hearts and in events, the design of the salvation of God.

Make it so for us, your children, that grace might prevail over pride
and that we might become merciful
as our heavenly Father is merciful.
In this time that leads us to the feast of the Birthday of Jesus,
teach us to go against the current:
to strip ourselves, to lower ourselves, to give of ourselves;
to listen, to be quiet, to focus away from ourselves,
so to make space for the beauty of God, the source of true joy.

O our Immaculate Mother, pray for us!"

UPDATE -- It is on this day in 2015 that the Holy Father is instituting a Year of Mercy:


"I have decided to call an extraordinary Jubilee that is to have the mercy of God at its center. It shall be a Holy Year of Mercy. We want to live this Year in the light of the Lord’s words: 'Be merciful, just as your Father is merciful. (cf. Lk 6:36).' "