The Age of Secularization


[This review appeared in First Things magazine. Mr. Maier, after serving as editor-in-chief of the National Catholic Register, became an aide to Archbishop Charles Chaput].


This spring marks the twentieth anniversary of NewTech98. Officially the "International Conference on New Technologies and the Human Person: Communicating the Faith in the New Millennium," Newtech98 was sponsored by the Pontifical Council for Social Communications and the Archdiocese of Denver. It had one main achievement. It brought together in an unprecedented dialogue dozens of Church leaders from Latin America, North America, Europe, and the Vatican, and senior executives from Adobe Systems, Microsoft, IBM, and other tech innovators. Media scholars and journalists also took part.

Amid the meeting’s praise for all things techno, two men raised concerns. The first was Cardinal Jean-Marie Lustiger of Paris, who spoke of technology’s subversive effect on human identity and self-understanding. The second was Neil Postman, author of Amusing Ourselves to Death and Technopoly. Postman gave the most arresting talk of the three-day event. It included these words:


A sophisticated perspective on technological change includes one’s being skeptical of Utopian and Messianic visions drawn by those who have no sense of history or of the precarious balances on which culture depends. In fact, if it were up to me, I would forbid anyone from talking about the new information technologies unless the person can demonstrate that he or she knows something about the social and psychic effects of the alphabet, the mechanical clock, the printing press, and telegraphy. In other words, knows something about the costs of great technologies …

In the past, we experienced technological change in the manner of sleep-walkers. Our unspoken slogan has been "technology über alles," and we have been willing to shape our lives to fit the requirements of technology, not the requirements of culture. This is a form of stupidity, especially in an age of vast technological change. We need to proceed with our eyes wide open so that we may use technology rather than be used by it.

At the time, sitting in the audience, I thought both men—the Christian leader and the secular scholar—were prophetic. But in fact, they were thirty years late to the party. As early as the 1960s, the philosopher Augusto Del Noce had raised the same concerns more deeply and comprehensively. And he’d written some of the best analysis anywhere of technology’s impact on Western politics, economics, and culture, and postwar Europe’s soul.

At the height of Soviet power, Del Noce predicted with stunning accuracy the collapse of Marxism-Leninism. He foresaw the sexual revolution in its weirdest forms, including the transformation of the political left from advocate of the working classes to defender of sexual "freedom." He explained the link between the fierce rejection of traditional morality in the 1960s and the same decade’s ferocious moralizing for radical change. And he described in great detail the fundamentally totalitarian nature of the West’s emerging tech civilization. 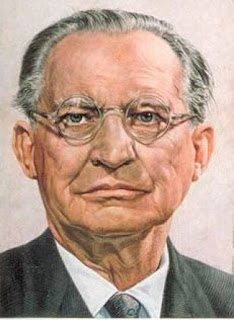 A committed Catholic and one of Italy’s leading public intellectuals until his death in 1989, Del Noce is largely unknown in the United States. But one hopes that will change with the recent release of The Age of Secularization, translated by Carlo Lancellotti and published by McGill-Queens University Press. The Age of Secularization is a kind of "prequel" to Del Noce’s The Crisis of Modernity, also translated by Lancellotti and published (in 2015) by McGill-Queens. Both books are collections of essays. But whereas Modernity deals with Del Noce’s later work, Secularization covers the social turmoil of 1964–69.

Del Noce’s use of the word "totalitarian" needs some explanation. He did not mean a society run by bullyboys in jackboots. He was far more worried about a culture addicted to science and technology as the only "real" forms of knowledge; a culture hollowed out and stupefied by the material well-being its tools provide; a culture subject to the resulting philosophy of scientism that renders questions of transcendence irrelevant by confining the human horizon to the here and now.

He defined the technological society as one that, in practice,


accepts all of Marxism’s negations against contemplative thought, religion and metaphysics; that accepts, therefore, the Marxist reduction of ideas to instruments of production; [but] that, on the other hand, rejects the revolutionary-messianic aspects of Marxism, and thus what is still religious in the revolutionary idea. In this regard, it truly represents the bourgeois spirit in its pure state, the bourgeois spirit triumphant over its two traditional adversaries, transcendent religion and revolutionary thought.

Put another way, Del Noce believed that Marxism is inherently atheist—atheist at its core. It succeeded as a mass movement by combining a strong critique of economic injustice with its claim to be scientific and its "metaphysical" promises of a utopian future. It fatally crippled the old religiously informed social order precisely because of its own capacity for religious-like zeal. But the logic of Marxist atheism inevitably destroys its own metaphysical, millenarian dimension.

Thus, historically, Marxism is a stalking horse for something else. It’s a stage in the development of a fully technological civilization. By discrediting traditional moral ideals and comprehensive systems of belief—including even belief in itself—Marxism clears the way for a more effective, pragmatic materialism that has little need to attack religion directly, because it renders the supernatural useless and implausible. The more well-being technology provides, the stronger its momentum toward technocracy. And technocracy becomes technopoly—becomes totalitarian—not by gassing dissidents, but by gradually commandeering the human imagination and excluding human reason from appeals to any higher rational benchmark, any higher moral authority, than itself.

Sex plays a key supporting role in this process. Absent a higher meaning to life, what matters is feeling as alive as possible, right now. And few things impart that feeling more pleasantly than sex. For Del Noce, the sexual revolution has nothing to do with personal liberation or "healthy sex." He sees it as the ethical expression of scientism and a masked form of neo-gnostic contempt for the body. In technological terms, the human body is inefficient and awkward—it’s weak, it’s clumsy, it decays, and ultimately it dies. It’s a defective machine in need of rewiring. Moreover, if the only legitimate form of knowledge is empirically verifiable facts and data, then sexual relationships and love have no higher moral meaning. They’re reduced to mere biology and the satisfaction of physical release—in effect, a social safety valve. The rest is emotional illusion at the service of evolution.

Even more dangerously, absent a respect for permanent truths about the world and human nature, "a society stops judging in terms of true and false, [and then] it cannot but grant the right to mendacity, to insincerity, which will be regarded as licit whenever they produce a positive outcome." As Del Noce notes, the rapid "diffusion of the technological mentality has been accompanied by the disappearance of the words true and false, good and bad, even beautiful and ugly." And "the first consequence of the rejection of permanent values has been the replacement of the dyad 'true-false' with the dyad 'progress-reaction.' "

Del Noce was not a Luddite. He welcomed the obvious benefits in new technologies. Like Jacques Maritain, whom he admired, he praised the good in modernity, especially "its attention to the subjective aspect of the apprehension of truth, and thus to freedom; to the form in which truth is welcomed as such." In the words of Lancellotti, Del Noce understood that "we cannot just rely on a mechanical repetition of [religious] formulas, because what we received from our forebears is conditioned by the questions they faced, and we ourselves can only think in terms of the questions we are facing."

But Del Noce also knew how easily a respect for historical circumstances can morph into a belief that truth is culturally created and conditioned—and therefore adaptable (read: malleable) as needed. Thus, he saved some of his sharpest criticism for Catholic progressives who, in his view, served as flacks for "progressive" politics and secular irreligion within the Church herself, no matter how pure their intentions. Complaints in today’s Church, even among some of her leaders, about "fixist," "rigid," and "abstract" doctrines policed by "doctors of law" are anything but new. Del Noce knew them well in his own time and saw them as anti-intellectual and rooted in a kind of neo-Modernism.

Twenty years after Newtech98, the possibilities for human development it addressed have matured into realities—some good, some much less so. How to understand our current cultural moment and what to do about it are urgent questions. They are dealt with eloquently in recent books by Patrick Deneen, Mary Eberstadt, Charles Chaput, Rod Dreher, R. R. Reno, Anthony Esolen, and others. But Carlo Lancellotti has done us an important service by making available in English the work of a man who saw the shape of today’s world more clearly, more deeply, and earlier than many others.

Augusto Del Noce is the most important thinker we don’t know. That’s our loss—but it needn’t remain so.