What happened in South Vietnam the day after Selma's 'Bloody Sunday'?

“I guess we’ve got no choice, but it scares the death out of me. I think everybody’s going to think, ‘we’re landing the Marines, we’re off to battle.’ ”
—President Lyndon B. Johnson, 6 March 1965


"On 8 March 1965, two battalions of U.S. Marines waded ashore on the beaches at Da Nang. Those 3,500 soldiers were the first combat troops the United States had dispatched to South Vietnam to support the Saigon government in its effort to defeat an increasingly lethal Communist insurgency. Their mission was to protect an air base the Americans were using for a series of bombing raids they had recently conducted on North Vietnam, which had been supplying the insurgents with ever larger amounts of military aid." 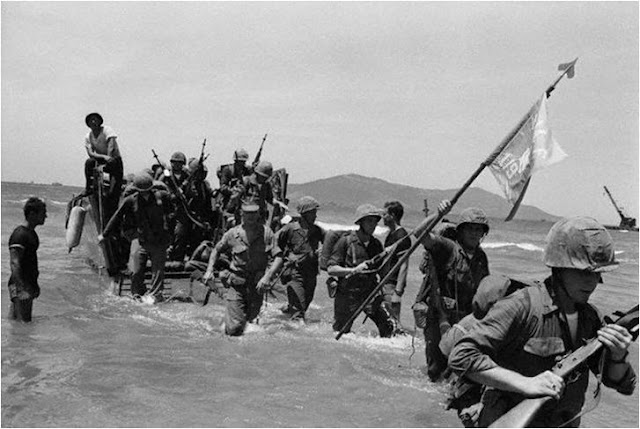 The Marines landed at Da Nang the day after the police beating of the Alabama civil rights marchers at the Edmund Pettus Bridge. Later that month, Lyndon Johnson urged Congress to pass the voting rights bill -- saying "We Shall Overcome."

That was around the same time that the SDS organized the first teach-in for 3,000 students -- at the University of Michigan.

By 1968 we had more than half a million troops in Vietnam.


UPDATE: Here is a report on the city of Da Nang today.

American soldiers sit down and share memories with their Viet Cong counterparts near the landing beach.