WEEKLY BRIEF
BOUNDARY CLARITY AND THE DEEPER BONDS OF LOVE.
The fundamental structure of matter is the atom with its outer shell of electrons poised to make and break bonds to form larger molecules and structures. The fundamental structural unit of physical life however is an enclosed structure-the cell. The membrane of the cell must maintain the interior integrity of the cell as well as provide a way for taking in and expelling the nutrients and wastes necessary for the interactions of life. If the membrane lets in unrestricted amounts of water, the cell will burst and die. If the membrane shuts out all nutrients, the cell will starve and die. Entry must be restricted and regulated so interior life can be cohesive and integrated.
The deepest bonds of human love and community need structured forms to be realized as well. The structured covenant of marriage and the boundaries on behavior enforced by customs of sexual fidelity foster the bond of male-female love. The nations too are forms of human bonding defined by real boundaries and covenants of membership. To dissipate the nation as a primary human community is to deny ourselves the public territorial community that transcends group identity by racial and class differences. The art of politics is to build up the common wealth and common good of the citizens of the nation. In America, this includes the men who work with their hands, the men in prisons who need to be punished and reintegrated, and the millions of working undocumented immigrants from decades of a culture of unenforced boundaries. The reason our borders must be closed and legal immigration slashed is so we can truly integrate the poor and working people already here in a new nationalist synthesis. A combination of amnesty and a big beautiful wall will not be enacted by either party alone but is utterly doable by a coalition of patriots. It is the weakness and incompetence of nations in Central America and Mexico which present our nation with a crisis on the southern boundary. We must confront these failing Catholic nations with the example of a Christian nation acting with the authority that defines boundaries, the public love that integrates immigrants as fellow citizens and the generosity that welcomes true refugees.
A CATHOLIC ADDENDUM
No-one should trust any gestures or statements by America's Catholic bishops about the higher morality involved in violating established boundaries. As a body, they understand neither nations or men.  In their demeanor they resemble the pagan Greeks and similar societies in which intellectuals ruled the bodies of foreign prisoner slaves and younger men of lower social status to do their physical labor and serve as their sexual rag dolls. The depravity of the huge Catholic clerical homosexual cult aimed at teen age boys and young male adults has been an essential acid in dissolving the old Catholic Democratic urban polity. The big-city Democrats of Chicago Mayor Richard Daly were masculine, protective, nationalistic, and working class. They were replaced.  Middle class feminists with family connections pushed their self centered careerism and aborted away their duties of motherhood. They found a new kind of Catholic male in their homosexual chancery allies. The sexual left  hijacked the party of American workers and the Christian interracial civil rights movement. The interracial male protective bond memorialized by the Frederick Hart statue at the Vietnam Memorial in Washington DC was the American nationalism of John Kennedy and his Archbishop soldier friend Philip Hallinan. John Kennedy saw Americans as a band of brothers fighting in a dangerous world against an atheist empire. Archbishop Hallinan, a chaplain in WWII and civil rights icon in Atlanta, saw the priesthood as a sacral brotherhood of fathers waging war against the Evil One.
Chappaquiddick Ted Kennedy and Beach House Uncle Cardinal Ted Mc Carrick were very different men than the old Catholic patriots. They were cunning allies. They shared that Catholic Irish pedigree of understanding institutions and the power of group loyalty. They used their institutional alliance to enhance their private exploitative, criminal and perverted desires (the classic definition of tyrants). Their story is quite repellent and only now is coming to light. When Catholic bishops say violating fundamental boundaries doesn't matter, take them at their word. They really mean it.

THE LAVENDER DEEP STATE IN THE AMERICAN CATHOLIC EPISCOPACY: Theodore McCarrick is the American Bishop's Harvey Weinstein. We will have much more to follow. First Things, The Catholic Thing, EWTN, The National Catholic Register, Crisis and the great majority of American Catholic neoconservative commentators have been strangely silent about the names and players involved in the deep homosexual corruption of the American episcopacy. Their vituperative criticism of Pope Francis is in stark contrast to their "live and let live" approach to the homosexual clergy who freely mingle among the intellectual "conservatives" and "liberals". The mainstream media has never been willing to write the Catholic clergy abuse story as a homosexual deep state but that is 90% of the tale. American Conservative commentator Rod Dreher has tried to expose this deep corruption by naming names. The shock of it all made him turn from the Catholic Church to Orthodoxy. Finally the exposure of Theodore McCormick  "the dean of depravity" may vindicate Dreher's work years ago and cast a light on a very big dark place in the American Catholic Church. The American bishops knew all of this. Top Democrats in the Ted Kennedy circle knew their personal Cardinal was a homosexual with a preference for men in their late teens or early twenties. Maybe American bishops can let up on the training programs for lay catechists and get a mass resignation from the USCCB.

VATICAN I: Father John O'Malley interview. He is the best historian of the three great modern Councils - Vatican II, Vatican I, and Trent. Here is a good discussion of rise of ultramontane Papacy in historical context. The Vatican Councils are two responses to the "long 19th century". Modernity was an ideology - it had to be opposed. The present world is God's creation - it must be sanctified.

POPE FRANCIS AND ROSS DOUTHAT: An interview and essay by William Doino of Inside the Vatican.

DOMINCANS: ...are bringing religious orthodoxy back to the campus.

G.K. CHESTERTON ON HOW EVIL TRIUMPHS: “Evil always wins through the strength of its splendid dupes; and there has in all ages been a disastrous alliance between abnormal innocence and abnormal sin.”

PAUL VI AND POPE FRANCIS IN GENEVA: A revisit of Paul VI telling the Genevans, "We are Peter."

THE VIRTUE OF NATIONALISM: Yoram Hazony.

HAZONY ON ISRAEL: "Living in Jerusalem, I have long been convinced that we need to recover the biblical view of human action in public affairs if we’re to restore a culture of political responsibility. The Labor Zionism that played such an important role in the birth of the State of Israel was no conventional secular movement, as is so often supposed. Its leadership, as epitomized by Israel’s first prime minister, David Ben-Gurion, had all been born into Orthodox Jewish homes. And despite their notorious disinterest in the finer points of traditional Jewish observance, they remained in the grip of an incandescent and explicitly biblical faith with regard to Israel’s restoration to its land and the Jewish people’s future role among the nations. With the decline of Labor Zionism in the 1970s, Israel traded in this unorthodox biblicism for a more mundane political culture modeled after European social liberalism—a culture designed, above all, to free the State of ­Israel from its historic entanglements with the Hebrew Bible and the God of Israel."

CANADA'S LARGEST PROVINCE OUSTS THE SEXUAL LIBERALS: A devastating defeat of the lesbian leader who discovered her proclivities at age 37, one husband and three kids down the road.

A HARVARD PROFESSOR, A CHINESE STUDENT, AND RELIGION IN AMERICA: A short video, an international insight: "If you take away religion you can't hire enough police."

III. AROUND THE WORLD R&G NATIONS ROUND UP

MEXICO FRONT RUNNER IS LEFTIST BUT A NATIONALIST POPULIST AS WELL: He comes from Tabasco, one of Mexico's most notorious priest killing states. The green in the Mexican flag stands for the nation as an independent land. The white is for the one true religion. They haven't put God and nation together yet but neo-liberalism and the rule of cientificos and technocrats is clearly not enough to keep public order. Andres Manuel Lopez Obrader (AMLO) saw how NAFTA helped oil and urban districts while hurting the farming fishing economy of Tabasco. His fledgling party is the National Regeneration Movement (MORENA, the Spanish acronym, also means “dark skin”). They are in a commanding lead for the July 1 elections. His heroes are former Presidents Benito Juarez and Lazaro Cardenas.

RIZAL OF THE PHILIPPINES: A spiritual biography of the Philippine's Independence fighter shot by the Spanish in 1896.

DUTERTE OF THE PHILIPPINES: Practical, hardheaded.

COLUMBIA ELECTS A CONSERVATIVE POPULIST
IVAN DUQUE gets 55% of vote in this South American country of 49 million.

THE SAUDIS AND UAE IN YEMEN - A DANGEROUS ALLIANCE IN AN UNHOLY WAR AGAINST ANOTHER COUNTRY: Isn't the vicious attack of the Saudis and UAE against the Shiites of Yemen as serious a violation of international order as the Russians letting Russian speaking Crimea join the Fatherland in an overwhelmingly popular annexation? In fact the destruction of the Houthis infrastructure and now port city is a considerably more significant violation.


"This week, Yemen's already-brutal civil war may be entering an even deadlier and more worrying phase. An Emirati-led offensive is underway against the port city of Hodeida, which is controlled by the Iran-backed Houthi rebels. Security analysts and aid agencies fear that a protracted siege of Hodeida may only deepen Yemen's misery. Hodeida is a crucial hub for humanitarian aid; two-thirds of the Yemeni population depends on food and goods flowing through the port. And urban fighting could put countless civilian lives at risk, displace hundreds of thousands of people and disrupt efforts to alleviate Yemeni suffering. “It is the lifeline of the country,” said Lise Grande, the top U.N. humanitarian official in Yemen, to my colleagues. “If you cut that port off, we have a catastrophe on our hands.” She predicted that as many as a quarter million Yemenis could die of violence, hunger and illness.

Readers of Today's WorldView will be all too familiar with the grim statistics. Thousands of civilians have died since March 2015. A Saudi-led blockade and the collapse of infrastructure have led to shortages of virtually everything, especially food and medicine. Some 8 million people are on the brink of famine, and more than 1 million have been infected with cholera. By one estimate, around 50,000 Yemeni children died of starvation, malnutrition or disease last year alone. The Saudis and the Emiratis, the principal foreign powers that intervened on behalf of Yemen's routed government in 2015, argue that aid will move much faster once they have freed the city from the Houthis. Buoyed by key defections in the Houthi ranks, the coalition sees the city's potential capture as the victory that will tilt the war definitively in their favor. 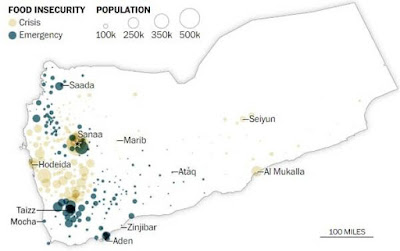 The Houthis appear primed for a bitter defense of Hodeida that will likely turn into a publicity nightmare for the Saudis and Emiratis as civilian deaths mount. U.N. officials, who administer a weapons-inspection program at the port, are not convinced by arguments that the port has been used to smuggle Iranian weaponry to the Houthis. Even the United States, which is refueling coalition aircraft and supplying it with intelligence and munitions, long cautioned against an outright assault.