The Apostolic Priesthood: Icon of the Trinity and Template for the Nations. Ordering the Loves of Men

David Pence on the true meaning of the Male Priesthood:

The Fatherhood of God is a reality older than matter, space, or time. Christ taught us to pray for patriarchy: that the rule of the Father "be done on earth as it is in heaven."

Christ commanded his apostles to love one another as He loved them and as His Father loved Him. The priestly bond of love is not loving another as one loves himself. The priests are to love their brother priests as Christ has loved His Apostles, and as His Father had loved Him. It is a outward looking mission-soaked love. The Father loves His Son into a mission and Christ loves his apostles into that same mission. This really is a new order of love. It is the New Covenant of the male priesthood and Eucharistic Church.  It is a living extension of the Father -Son relationship at the heart of the Trinity.

The patriarchal fraternity of the priesthood is a "communion" of masculine-ordered love. This brotherhood of fathers is to be particularly protective toward that ancient biblical formulation of the needy -- "widows and orphans." The fatherless have always been victimized, so a band of brothers pledge their loyalty to the Father and their protective strength to the vulnerable. It is a mission that appeals to a manly heart. 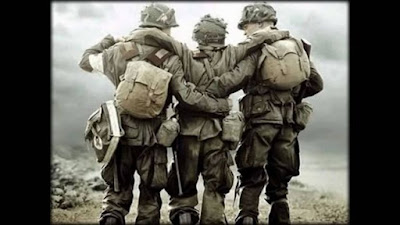 As the Council fathers said a half century ago: "This very councilor congress of ours so impressive in the diversity of races, nations, and languages—does it not bear witness to a community of brotherly love and shine as a visible sign of it? We are giving witness that all men are brothers whatever their race or nation." When Christ first ordained the apostles He sacramentally instituted a new ontological reality through which humanity would be restored to God the Father.

Brotherhoods are blood oaths; priests drink the blood of the covenant. Eleven of the first apostles were martyred. Brotherhoods are outer circles around an interior femininity that is cherished, and so the priest guards the tabernacle housing the Sacred Presence. The Apostles guarded Mary the tabernacle who housed the Sacred Presence as well. Brotherhoods look outward toward a mission and thus the Church is not complete until humanity is drawn into the brotherly lattice.

Christianity is a communion built on loves, starting with the Trinitarian love of the Father for the Son animated by the Spirit. Sex differences are central to the human covenants of loving. This is expressed in the Catholic sacramental order of an all-male priesthood and male-female marriage. The sacramental order institutes the ecclesial community on a sacral and sexual order of love.

The first son of man was Cain. Called to fraternity, he answered with fratricide. He killed his brother out of envy. Brotherhood was reconstituted when Joseph forgave his envious brothers who had cast him in a pit to die. His loving forgiveness reconciled them with him under his father (Jacob/Israel). The nation of Israel was a reconciled brotherhood bound by a common law and land with a covenant sealed by every male in circumcision. Brotherhoods are meant to fight some foe. Danger and Conflict can be exhilarating to brothers in combat. It is why men always love football and sometimes love war. God made men to take joy in group combat because He has assigned us a combat role in the Divine Economy. We have a particular Hobbit like role in the expulsion of the Evil One. We are  lesser beings than him in faculties but through obedience to the Father and with the help of the angels, we will defeat him in battle.

Jesus Christ, the Son of God, was sent to reconcile all men with His Father and drive the Evil One from his dominion on earth. Christ was born of the most perfect manifestation of Israel -- the singular blossom -- the Virgin Mother. Christ dethroned Satan by His obedience on the cross and overcame death by His resurrection. He reconciled men to the Father by establishing a sacred brotherhood with the authority to cast out demons, forgive sins and share His real presence in the Sacrifice of the Mass. The patriarchal fraternity of the Father, the Son, and the Apostles is the template for the Church and the nations. These are the living foundation stones of the Kingdom of God. This ordered masculine love, this brotherhood of fathers sharing the Sonship of Christ has been attacked, exiled, tortured and executed through the ages -- from the first apostles to the 16th-century victims of the Protestant revolt to the thousands killed by the 20th-century atheists. Those attacks from the outside murdered many priests but never shattered the priesthood.

A deeper threat to the ordered love of the masculine public comes as Judas came. He betrayed from within and betrayed with a kiss. He was a Liar and a Murderer. He betrayed with a counterfeit love. As incest destroys the family from within and affects every member by destroying the equilibrium of the whole, so male homosexuality is an abomination against the Father and the Son, the brother and the brother. Like the sin of Ham, the act is too repellent to describe but the effects are generational. Murder kills a priest but the incestuous presence cripples the priesthood by fracturing group fraternity. This heinous sin against a victim should certainly be a capital crime in a just society. The victim we know NEVER forgets. In the spiritual realm this act by force or by consent is a desecration of the priestly office. The collared predator or the giggling boyfriend has committed a sacrilege against the  Fatherhood of God. He has perverted consecrated brotherly love with a counterfeit desire that cripples the priesthood as a functioning and sacramental  communal body. The outward sign of an orderly coherent communal body acting in love and speaking in truth disappears under the filth.
We hear the protest--"but homosexuality is not a sin, just the act". It is true that homosexuality is not a sin. It is a mental illness. If the priesthood is the highest form of ordered masculine love than homosexuality is the deepest form of disordered male attachment. It strikes at the core of priestly identity. This mental illness has made the current priesthood a crazy uncle instead of  a loving father. It is a fundamental psychological impediment to incorporation in the sacral brotherhood...and it doesn't go away after a good confession.
The great fraternities of Ignatius, Benedict, Dominic and Francis have been deeply polluted. The consecrated brotherhoods that spread the gospel through the world have turned in on themselves.  Almost every house forms a diabolical black hole sucking resources and young men into lives of dissipation and selfishness. They still feed on the capital of their predecessors and have great wealth and institutional social status to divide among themselves. A homosexual clericalism of deceit and death has replaced the priestly fraternity of ordered love which Christ ordained as the foundation stones of the culture of life.  The degradation of these central fraternal institutions (the orders and the dioceses) in Christian culture has devastating effects within the Christian countries. Look at Catholic Europe. Look at American Christianity. Consider the moral collapse of the political home of the American Catholic working man--the Democratic Party. See the  impotence and incoherence of Catholic political life in Latin American nations. All of these necessary and noble political bodies have suffered from the disappearance of the sacral brotherhood of fathers in consecrated and clerical life. When the light of the nations is eclipsed, the nations go groping in the dark.

The Apostolic love that Christ ordained the night before He died and confirmed at Pentecost conforms the souls of priests in the communion of the Father and his Son. It is a powerful love that transformed a fallen Empire into the nations of Europe. Brotherhood transcends the sin of racism and the toxin of class hatred. It can serve again today as a template of the territorial public fraternity of shared duties and love which forms the nations. Humanity is restored as a species to the household of the Father through fraternal love. That public love is expressed in the global priestly Church and the territorial nations from Israel to Korea, to Russia, to the Americas. It is a love that can heal the sick, forgive sins, protect the weak, cast out demons, and draw men, women and children into the Body of Christ. How we need this holy union! How we despise those who have betrayed it!

The love of brothers under the father -- the patriarchal fraternity of the priesthood -- is expressed in every monastery with an abbot and his monks. It is made local and territorial through every bishop and his diocesan priests. It is Peter and the Apostles still alive in the Pope and his bishops. May this powerful love draw humanity together in the ordained and orderly love which is our destiny as a species. May the Church be a Mother because her priests are once again a brotherhood of fathers. May they conform to Christ the High Priest and carry out the Will of His Father. 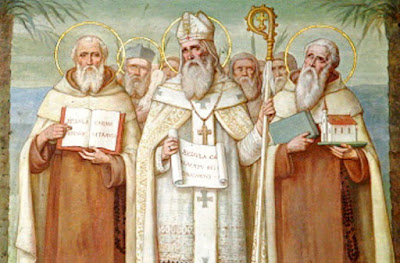