All Saints Day: Four Men striving to imitate our Lord, the true Man In Full

An interview with Dr. David Pence


You describe most men as falling into four main groups: soldiers, teachers, workers, and priests. How did you come up with that?

"Orare, laborare, studere, contendere." Those four Latin words describe the basic duties of the Catholic man. Each of us embody them in a greater or lesser fashion.

In my youth I attended  an all-boys high school, a Catholic seminary, and a federal prison. Each of those groups had different rules for finding one's place in the social order. I met the different types of men there. Some groups try to weed out certain character types. Leaving out one of these types of men always leaves a deficit. I went to a true Catholic boys school which did not define itself as "college prep." About 30 percent of the boys in our school were being prepared for college and life; the others were being prepared for life and some other kind of work. It was the most democratic and healthy maturation experience I can imagine. The modern university is, of course, dominated by teachers who -- with a vengeance -- have divorced religion from knowledge (out go the priests), military history from economic history (expel the soldiers), and the technology of the trades from engineering and science. The men who carry those disciplines are absent while bookish females are glad to fill in. Our seminaries seem to weed out warriors and workers.

Every man will have one or two of these tendencies more strongly than others, but you must know and appreciate all of them. This is also a good initial screen when your daughters are dating. My daughters and I always know pretty early with suitors which two of the four characteristics are present in their potential mates. My daughter in the convent says she has found a man who was a master carpenter, beat Satan at war, is the light of the world for knowledge, and gave the world the Our Father and the Mass as a priest. She plans to be his bride.


We've chosen a holy man or two, as examples for each of the categories.

THE PRIEST: Why John Vianney (19th-century France) and Pius X (the pope immediately before WWI) for the priests?

The priest mediates between man and God. Saint Pius X was the great reformer of the seminaries, and a teacher against atheistic modernism. But his greatest priestly act was centering the lives of Catholics and our parishes in the miracle of the Eucharist by encouraging earlier (age of seven) and more frequent reception. He brought Christ in the Eucharist to the center of Catholic life. The Protestant Reformation scattered the Christian sacramental order by elevating the individualistic aspects of Baptism and faith. Pius X reordered the daily practices of Catholic life and the  sacramental order around the communal priestly acts of the Eucharist.

Saint John Vianney, the patron of parish priests, was willing to stay in the confessional for hours to help set his parishioners free from sin. To be saved is to be delivered from the grip of the Flesh, the World, and the Devil. Nobody can do that on his own. On the day he rose from the dead, Jesus breathed on the apostles and gave all priests the authority to deliver us from evil. John Vianney (the Cure of Ars) reminds us that the path to the red light of the tabernacle showing Christ's true Presence passes through a priest in a confession box. I think John Vianney would measure the health of a parish more by the length of confession lines on Saturday, than percent at communion on Sunday. 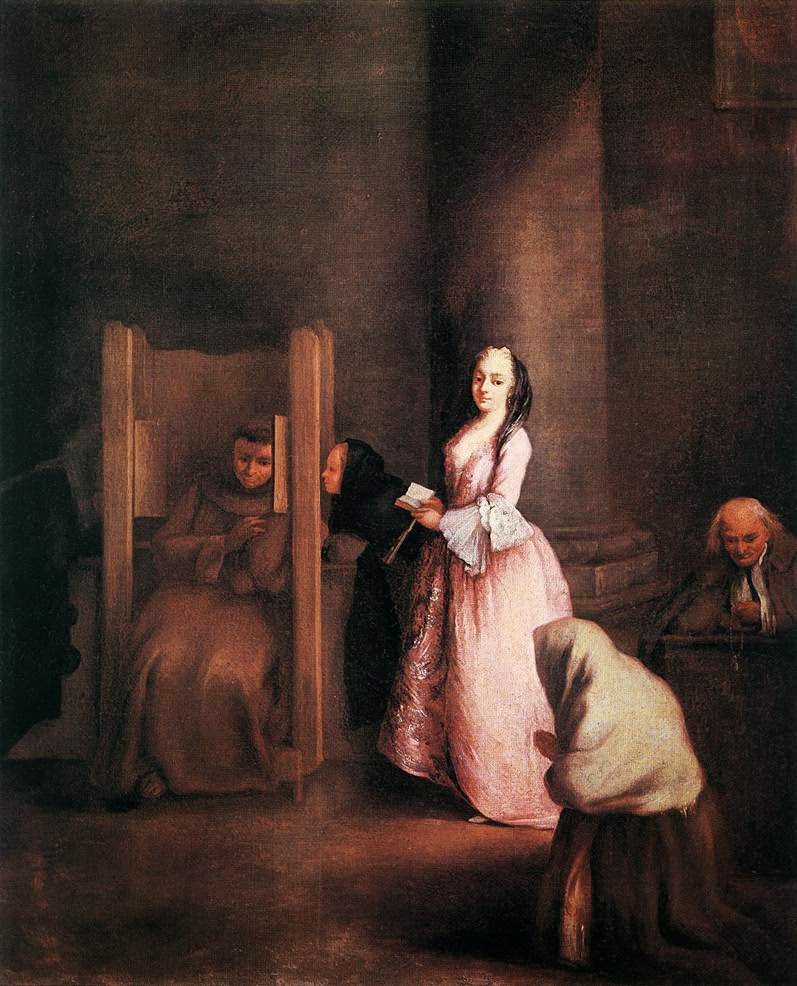 THE SOLDIER: Modern Jesuits, contra the 16th-century Spanish knight, think all problems can be cured with 'oil, soap, and caresses' (to borrow a pejorative phrase from Saint Pius). How did things go off the rails with today's company of Ignatian soldiers?

When Ignatius Loyola put away his cannons, he did not stop being a soldier. In every situation, he said, we must discern the spirits. It is not always apparent which is Satan and which is the Lord; but make no mistake, there is a battle of spirits and we are always helping one side more than the other. Chesterton once said we wake up on a battlefield, and there are hundreds of platoons and hundreds of different flags at battle. Which flag, which platoon, which battle? -- that is always the question. Ignatius is the warrior because he keeps the real enemy in front of us at all times. The modern Jesuit quit believing in Satan, and lost the emotion of hatred which is meant for Satan. Love without the discipline of a corresponding hatred becomes a syrup. It loses its ordering function. Let us hope the modern Jesuits can learn from our first Jesuit pope. Pope Francis keeps the reality of Satan and the discernment of spirits uppermost in his consciousness. One of the reasons he doesn’t draw the old lines of battle around abortion, contraception, and homosexuality is that he thinks there is a deeper line to be drawn against an Older Foe on other battlefronts we have too long ignored.

He was a Mexican Cristero fighting against an atheist government. He is the patron of all American men who will fight to align our nations under the sovereignty of God. He was only 15 when he gave his horse to a commander so the "more needed" commander  could escape from government encirclement. When Sanchez was captured, they asked him why he quit shooting. His answer was not exactly that of a pacifist: "I ran out of bullets!" He was imprisoned. The soles of his feet were peeled of skin, and he was marched to a graveyard. There he was shot for not renouncing Christ his King. Viva Christo Rey! We should not let it escape us that Saint Jose Sanchez and the Cristeros were establishing the rule of Christ by reforming their nation. The nations in all their splendid diversity are the communal forms by which men organize protection and law as fellow soldiers. There is only one King but there are many national callings. 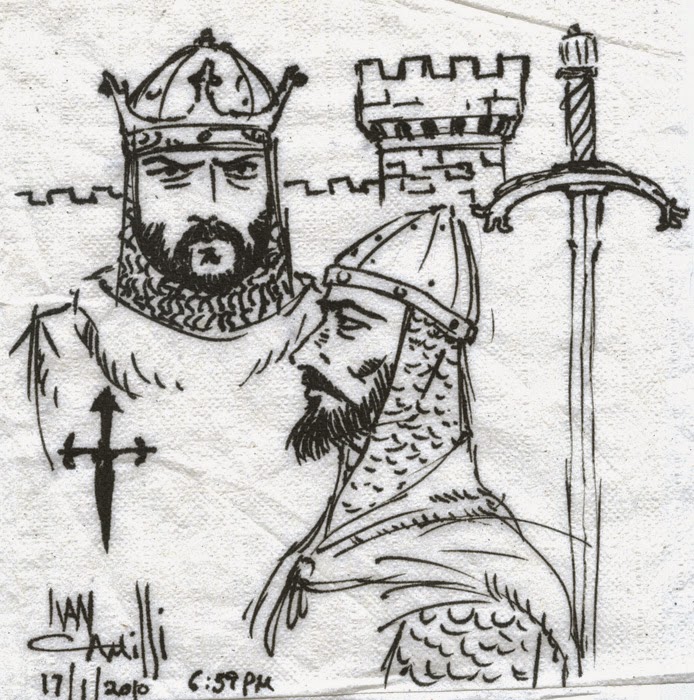 THE TEACHER: You have been a teacher for years, along with your doctoring. Teaching the young is a high art. What, principally, do you try to pass on?

A teacher transmits the practices and wisdom of his culture to the souls of his students.
I've tried to teach them there is a God, that they have a soul, and we are a Church.


One of G.K. Chesterton's most popular smaller books is his biography of Thomas Aquinas. Give us your reaction to a few lines:


"On a great map like the mind of Aquinas, the mind of Luther would be almost invisible... [Luther] destroyed Reason; and substituted Suggestion."


Thomas Aquinas saw both nature and the God of nature. He explained how man fits in the whole scheme of reality. Luther feared for his soul, and squeezed the Lord into his pocket grasping the tiny rabbit's foot of personal salvation. Even if Luther had to bypass the purpose of the universe or overlook the fate of mankind, he was content if he could see his place set at the table. Aquinas got on his knees as his most natural posture, and from there he could see the universe -- and felt it his duty as a teacher to explain it to others. He was taught by the greatest natural scientist of the age, Albert the Great; and they shared the compulsion of all great teachers: to participate in external reality  and then invite students to participate with them.


"[Thomas crafted] the great central Synthesis of history... An acute observer said of Thomas Aquinas in his own time, 'He could alone restore all philosophy, if it had been burnt by fire' ...There is not a single occasion on which he indulged in a sneer. His curiously simple character, his lucid but laborious intellect, could not be better summed up than by saying that he did not know how to sneer. He was in a double sense an intellectual aristocrat: but he was never an intellectual snob."


Certain learned men accumulate knowledge like a bag of precious stones. They can display it for honor, share some with favorites, or use it to flail their foes or underlings.
There are other great teachers whose knowledge is a participation in reality. They are always inviting others: "Do you see what I see?" They are much more impressive than the bag-men; they do not seek to impress their students, but infect them. St Thomas Aquinas taught his students the unity of truth,  the reality of God and the purpose of human beings.  He is the teacher's teacher.


THE WORKER:    Benedict (d. 543) taught monks to pray, and by his rule he kept them disciplined but not fanatic. They were stable, so they could be hospitable -- and yet you identify Benedict, first, as a worker. Why?

The worker is the missing man in seminaries, universities, college-prep high schools, and both political parties. After men are ordered in prayer, they carry out God's command to cultivate the garden and subdue the earth. From the communal monastery of prayer the men set out to till fields of agriculture, and craft the shops of technology. They sanctified labor in a way the Greeks and Romans would never do. The Greeks elevated the philosopher and the Romans praised the warrior. They both consider physical labor the province of  slaves. The monks of Benedict radically changed this social norm.  This Christian form of men under God working cooperatively to produce wealth became the basis of the corporations and cites of Europe. Look outside at your city or town. Every bridge, every office  building, every house, every sewer sytem and telephone pole is the product of free men working in groups. The Benedictine monastery is all about us. Around the monasteries, communal economies become templates of productive towns and cities. This model of men linked first by prayer and then by productive work forms the Christian commonwealth. This cannot be reduced to  either capitalism or socialism. Benedict and his men show us that Christians are doing something different. Christ grew up under the tutelage of  St Joseph the  carpenter.  When he picked his apostles He chose fishermen. Benedict and his men carried this "working man’s party" of Christianity into the desolated hillsides of fallen Rome and gave us Europe. 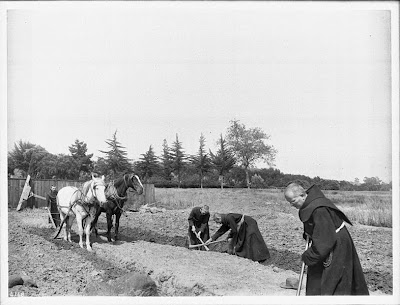