Father and Sons Defending the Sacred: The Real Hanukkah Lesson for Christians

Hanukkah begins this evening. It will end in eight days. It is not "the Jewish Christmas." Several hundred years before Christ, the Greeks, the very cosmopolitan educated Greeks, ruled over Palestine. When Antiochus had become the ruler he sought a uniformity of customs and loyalty. Circumcision -- that sign between Abraham and G-d that all the males would shed their own blood to be united as a people in Covenant with the Almighty -- was banned. The sacred precincts of the temple were defiled. Women who had their sons circumcised "were publicly paraded with their babies hanging at their breasts and then thrown from the top of the city wall." 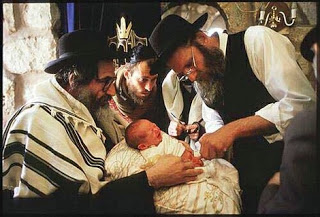 "... the Gentiles filled the temple with debauchery and revelry; they amused themselves with prostitutes and had intercourse with women even in the sacred court. They brought into the temple things that were forbidden, so the altar was covered with abominable offerings prohibited by the law." Most defilements were done by consenting adults and there were plenty of Jewish collaborators. "There was great mourning for Israel. Virgins and young men languished and the beauty of the women was disfigured. Her sanctuary was desolate as a desert. She became a stranger to her own offspring. Her feasts were turned into mourning, her sabbaths to shame, her honor to contempt. Her dishonor was as great as her glory had been and her joy was turned into mourning."

Against this sexual perversity so deeply linked with the defilement of sacral things, Mattathias and his five sons withdrew from the over-educated Greeks who scoffed at their ancient purity codes and rituals of divine worship. Before they organized to fight, the patriarch and the brothers "tore their garments, put on sackcloth and mourned bitterly." They knew the evil that had befallen their fellow Israelites followed their infidelity to G-d. They also knew they must organize to fight. They had seen a group of Israelites come before the Greeks and "refuse to profane the sabbath. Then the enemy attacked them and they did not retaliate... and they died with their wives and their children and their cattle to the number of a thousand persons." Mattathias resolved: "If we all do as our kinsmen have done and do not fight the Gentiles for our lives and our traditions they will soon destroy us from the earth. Let us fight against anyone who attacks us on the sabbath so that we may not all die as our kinsmen died in the hiding places." Mattathias and his men tore down the pagan altars. They also forcibly circumcised any uncircumcised boys they found in the territory of Israel." They stitched back together the only bond capable of ridding the land of abominations. They conscripted their state anew to guard the sacred of old.


"When the time came for Mattathias to die, he said to his sons, 'Arrogance and scorn have now grown strong, it is a time of disaster and violent anger. Therefore, my sons, be zealous for the law and give your lives for the covenant of our fathers." He appointed his son Simeon because of his wisdom to be "like a father to them," and appointed his son Judas (called Maccabeus, the 'hammer') to be "the leader of your army and direct the war against the nations." His sons and the men they gathered around them defeated the Greeks. They tore down the defiled altar and built a new one with uncut stones. They repaired the sanctuary and purified the courts. On the anniversary of the day the Gentiles had defiled the temple they reconsecrated the sacred precinct with song and acts of worship. For eight days they celebrated the dedication, and then "Judas and his brothers and the entire congregation of Israel decreed that the days of the dedication of the altar should be observed with joy and gladness on the anniversary every year for eight days…"

There are many tales of noble martyrs who refused to profane the commands of the Lord before the Maccabees restored a civic order in consonance with G-d's decrees. In the Book of Maccabees the most notable was the mother and her seven sons who refused to defile themselves by eating pork. The holy mother watched her sons be tortured and killed and urged them one after another to persist in courage. Then "her womanly heart with manly courage" was pierced as well. In the Babylonian Talmud there is the story of the miracle of the oil in which one day's supply lasted for eight.  When the Church recounts this re-dedication of the temple in her late November liturgy she couples the reading from Maccabees with the Gospel of Jesus cleansing the temple. Two centuries after the Maccabees, the Jewish convert from Tarsus asked Christians, "Do you not know that you are a temple of the  Holy Spirit?"

For eight days let us Christians look for the lights of the candles shining forth from Jewish homes. They are not lit for the use of the household, but to give glory to G-d by reminding all who see them that the sacred practices of a culture can only be protected if there are fathers and sons who will covenant together under God to fight for them.