February 2: Candlemas -- A Light to the Nations 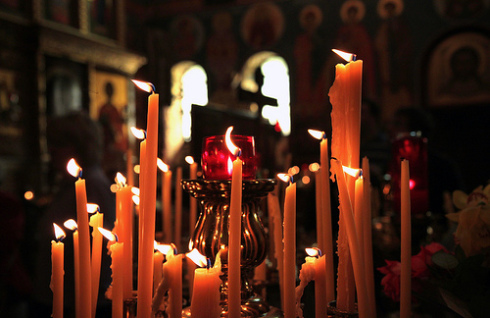 
It was ordered that forty days after a "son opens the womb",  he must be consecrated to God. Jewish males had been spared on the night of the first Passover in Egypt 1500 years before the birth of Christ. Jewish parents acknowledged that their first born sons were not their own and they presented them in the Temple to God. For millennia the Pidyon haben (redemption of the first-born son) has been performed. In present day Judaism, this custom is now seen as ransoming the boy from his duties as priest. Thus, a Kohen is often paid in his stead.

When Jesus was brought to the temple for this offering, an old man who had been promised that he would see the Messiah before his death, greeted Mary and Joseph and took the boy in his arms and gave thanks to God. Simeon spoke this short song or canticle which is now prayed daily by priests and religious in the official night prayer of the Church.

"Lord now let your servant go in peace;
your word has been fulfilled;
My own eyes have seen the salvation
which you have prepared in the sight of every people
A light to reveal you to the nations
and the glory of your people Israel." 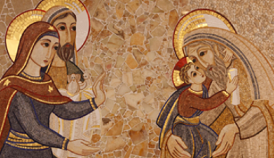 Jesus revealed the glory of Israel through His mother Mary. The God of the Universe chose Israel  among all the nations of the earth and His Son was born to a Jewish Virgin-mother. Thirty years later as a man, Jesus would draw twelve Jewish males into the apostolic brotherhood of the Church. That sacred fraternity would be a template for the territorial nations in which men live bound together as fellow countrymen under a law and leader. The Church and the nations are meant to form the ordered biblical pattern of male agreement in the Kingdom of God. The 2500 bishops and patriarchs during the Second Vatican Council (1961-1965) put forth the Catholic Church's interracial and international priestly brotherhood as such a template for the nations. Their document on the Church was called Lumen Gentium: a light for the nations. On this 40th day after Christmas, every February 2, candles are lit in memory and fulfillment of Simeon's words. The love by which Christ bound his apostles has formed the living foundation stones for the Church. An analogous public love binds men as citizens in nations from Ireland to China. This kind of Love is like Light -- public and emanating by its very nature. Interlocking sacral patriarchal fraternities constituting the Church and the nations are meant to order the public loves of mankind into a single Body under God. Thirty three years after Simeon said that Christ would reveal God to the nations, Christ completed his offering as the Beloved Son. His words fulfilled the promise made at His Presentation in the Temple: "Father, into your hands I commend my Spirit."