ASCENSION THURSDAY: Thus began “his participation, in his humanity, in God's power and authority.” The Restoration of Patriarchy

"Yea, angels tremble when they see

how changed is our humanity;

and God, the flesh of God, hath reigned." 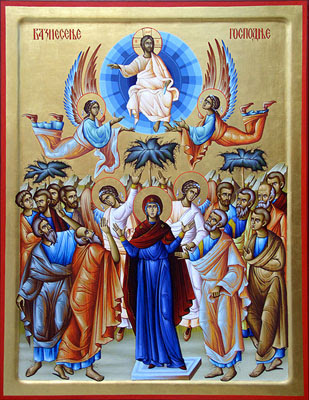 Doc Pence writes on this feast of the Ascension:


An old nun reflecting on the Ascension said it had always been her least favorite mystery of the rosary. "We wait two thousand years for the Messiah.  He comes. He is killed, but he conquers death and rises victorious from the dead. He is back for just forty days and then He’s gone again—and we call that a joyful mystery?"

But it really is such a glorious feast. We should stop the work week and devote this 40th day after Easter to contemplate this very good news. For Christ finally brings Adam where he was meant to be – in communion with the Father through the Son. "The nature of our Humanity in Christ was raised above all the Hosts of heaven, over all the ranks of angels, beyond the height of all powers, to sit with God the Father," said Leo the Great (d. 461). Christ the alpha male who configures humanity into a single organism shows humans our heavenly place in the divine Plan. We will be the Body of Christ at the right hand of the Father.

The netherworld of Death has been lit up. The Prince of this world witnessed the greatest prison-break in history, as the King returned and claimed as his own not only Abraham and Moses but Adam and Eve -- the Chosen People and the human race. Christ took back the nether-world -- all that space and time where man enters the land of the dead is now a place not to be imprisoned by the Devil but to encounter the risen Christ.

One kind of earthly absence allows His Sacramental Presence everywhere else. One Divine Person goes behind a cloud and the host, while the Person of the Spirit becomes more prominent.

There has been a righting of the spiritual universe with the Son entering the Divine Sanctuary providing a Way for humanity's theosis.  The Beloved Son has obeyed.  Humanity has been returned to the Father. Filial Piety has restored us to the Patriarchy. Christ now is returned to the right hand of the Father with these new "creature persons" allowed to participate in their Divine Communion. This restoration of the Beloved Son to the Father after His great battle creates a huge magnetic field penetrating the biosphere where men are meant to form ourselves into the patriarchal fraternity of the apostolic church. This will create a central protected space for the Marian Church where virgin mothers receive the Holy Spirit and live the works of mercy.

Christians need to keep acting even as we exalt in our new elevated status as sanctified humanity.  St. Augustine in his Ascension Day sermon reminded us: "Christ is now exalted above the heavens, but He still suffers all the pain that we the members of His body have to bear. He showed this when He cried out from above,  'Saul, Saul, why do you persecute me?' and when He said, 'I was hungry and you gave me food'."

The angels (who seem to appear whenever a ladder is extended from Heaven for them to ascend or descend) have the final word. As they assured Jacob that his descendants would be blessed and restored to their Promised Land, they designate the Apostolic Church as the site of the Lord's Return:


"Men of Galilee...This Jesus who is taken up from you into heaven, shall so come, as you have seen him going into heaven."