Jefferson's admiration for the Anglo-Saxons

The reaction of Pence to a magazine column on the Anglo-Saxons:

From Plato to NATO: The Idea of the West and Its Opponents [a book by David Gress that Pence will review this winter] has a very good section on the Anglo-Saxons. It was new to me. He says a lot of that thinking influenced John Adams and Thomas Jefferson. Everybody in those times had some theory of more advanced or vigorous races. The Anglo-Saxon story was another tie to Germanic tribes and the warriors bonds from which came liberty.

The 'Forbes' writer talks about individuals and families -- then later, churches -- as part of the Anglo-Saxon tradition. But that is much less communal than the reality which Jefferson and Adams saw...

Again, the 'Forbes' guy greatly reduces the military communal link of Anglo-Sazon tribes to liberty. The cult of hardy tribesmen (think of William Tell kind of men) is much closer to our Founding Fathers than the "leave me alone" libertarianism of Ron Paul and the rest of the "Washington is the enemy" crowd. 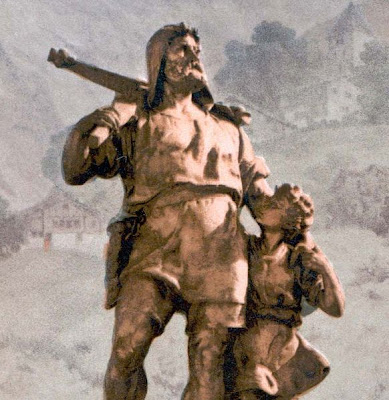