Who will wield the Christian sword?

In October 2011 young Coptic Christians were killed demonstrating for government protection against escalating church burnings and anti-Christian violence in Egypt since the February 2011 resignation of 30-year President Hosni Mubarak. The militancy of the Christians and the tank response of the Egyptian military assure this matter will be settled by some combination of reason and force leading to exodus, protected communities, or a massive bloodletting against close to ten percent of Egypt’s population. A secular state where religion doesn’t matter is not on the option list.

One way to understand the “Arab Spring” of the last forty years is a religious and democratic revolt against the authoritarian secular nationalist party rulers who dominated the 20th century after the fall of the Ottoman Empire. Ataturk in Turkey, Nasser/Sadat/Mubarak in Egypt, Pahlavi in Iran, Assad in Syria, the Hashemite Kings in Jordan, and Hussein in Iraq considered themselves modern nationalist leaders -- not new caliphs of Islam. The secular nationalists have all been challenged by movements calling for democracy for the people and a more authentic Islamic culture.

Christians as minorities in all of these countries had supported the earlier secular nationalist movements (including laws at times against the public expression of majority-religion practices). Christians played important roles in government, education, and commerce beyond the strength of their numbers. Similar minority roles were played by Jews in Muslim-dominated Spain, Tutsis in German-Belgium colonial governments of Rwanda, and Indians in the former British colony of Uganda. 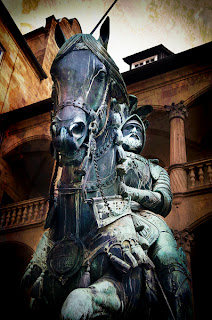 Sirhan Sirhan, on the one-year anniversary of the Six Day War, assassinated Robert Kennedy for his support of Israel during that conflict. Sirhan was raised in a Christian Arab home and said on arrest he did it for “his country.” He meant Palestine -- the still imagined secular nation to be born even now as the others pass from history. But secular nationalism will not be the shape of Islamic nation states or the future of the Mideast. The era of the strong secular party leader protecting the freedom of cooperative Christians is over.

What will become of the Christians? The Jews have been expelled. They had one place to go and one defender who would evacuate them. When the Christian Orthodox Russians proposed themselves as guardians of beleaguered Mideast Christians in the pre-nationalist Ottoman era, they were stopped by Protestant Britain and Catholic France in the Crimean War (1853-6). The Papal temporal sword was broken militarily in 1870 and surrendered by Concordat in 1929. The Popes of the last forty years have properly accepted their own disarmament. But can it be fitting and proper to advocate the same for the Christian nations? Our churches are burning. Who will wield the Christian sword?