Christ cast out the darkness; Rene Descartes' philosophy had the opposite effect

One historian has written: "Philosophically, the Enlightenment began when Descartes made a search for clear and distinct ideas to serve as a foundation for knowledge." 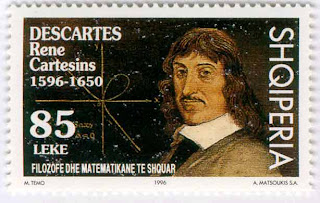 Most folks today, in the disorder we call modernity, would concede that was a bootless search by the Frenchman who wrote all his major works in the Netherlands and died in Sweden.

From an interview with philosopher Peter Kreeft:

Christians today seem to practice a "sanctified rationalism." We don't tap into the sense of a higher reason that seems necessary to begin to apprehend the idea of a mysterious God.

"In the Middle Ages and in ancient times, reason was the cosmic order of things which we understood intuitively before we understood it analytically. When the ancients defined man as the rational animal, they didn't mean he was a narrow, dull, abstract analytic thing. They included his heart, his moral sense of conscience, his aesthetic sense. It was part of reason to wonder at the beauty of the heavens."

From an essay by the Jesuit priest James Schall:

John Paul II makes the following startling statement: "Over the years I have become more and more convinced that the ideologies of evil are profoundly rooted in the history of European philosophical thought." What we think is not an indifferent matter, particularly if we think our minds are not bound by what is. This intellectual source of evil calls for a reexamination of the Enlightenment, which had a somewhat different form in each European country, including Poland. It erupted with particular violence in the twentieth century with Marxism.

Demonstrating his own careful philosophical studies, John Paul II examines the effect of Descartes and how his thought differed from the philosophy of St Thomas. Aquinas began with being, with what is. Descartes began with thought itself, the famous cogito. At first sight, this difference might seem a mere philosopher's quibble and not the origin of modern evils. But Pope Wojytyla makes a good case for why this difference enabled modern ideologies to be so lethal:

In the pre-Cartesian period, philosophy, that is to say cogito, or rather the cognosco, was subordinate to esse, which was considered prior. To Descartes, however, the esse seemed secondary, and he judged the cogito to be prior. This not only changed the direction of philosophizing, but it marked the decisive abandonment of what philosophy had been hitherto, particularly the philosophy of St Thomas Aquinas, and namely the philosophy of esse.

In Aquinas, thus, God was a real and self-sufficient Being who created an actual world to which we are open. God was the "necessary ground of every being."

The shift that took place with Descartes meant that God was "thought." All being, including the divine being, remained within thought. Indeed, in Descartes, for anyone to know anything outside of one's self, he first had to prove the existence of God in his mind. "Philosophy now concerned itself with beings qua content of consciousness and not qua existing independently of it."

The significance of this shift in emphasis is that a Creator God who is subsistent Being (Aquinas) might be able to communicate with real being from outside the causation of creatures, but a God totally under the control of our minds (Descartes) could not do this.

Email ThisBlogThis!Share to TwitterShare to FacebookShare to Pinterest
Labels: The Human Organism