An Open Letter to Cardinal George by Dr. David Pence 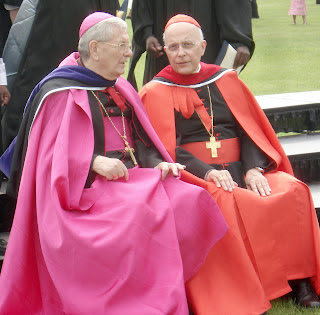 After reading some assorted comments by Chicago archbishop Francis George at the "What Does The Prayer Really Say" website, I sent them along to David Pence, MD. In response, he composed this open letter.

The recent HHS ruling to treat institutions created in the heart of the Catholic Church as ancillary corporations bound to follow American law seems an accurate read of their de facto nature. This de-churched state of Catholic charities and schools is sad indeed. But that is why Pope John Paul wrote 'Ex Corde Ecclesiae' -- because so many of our universities, Church employees, and clergy were no longer acting from the heart of the Church. The hyperbolic special pleading for these institutions as some sacred precincts of purity, like unto Caesar’s wife, strikes a false tone to an honest ear.

It is Lent. Let us repent. Too many in the Church made peace with the sexual revolution. Almost all the Catholics that Barack Obama crossed paths with in Chicago never viewed birth control as a significant moral problem. If the truth be told, they have embraced radical feminism and gay rights to a much greater extent than plumbers, carpenters, and tool-and-die workers. President Obama’s Catholic friends and supporters are much more deeply committed to homosexual acts and abortion as positive goods to be protected than the black Christians who are another pillar of his support. President Obama in his appointments for HHS director and Supreme Court justices has been more than solicitous to the white sexual Left.

I ask you to consider your office. Does the President need one more "prophet" standing up to him "to speak truth to power"? This is no time to assume the posture of the Berrigan brothers. We need masculine Shepherd Bishops (and feminine Mother Superiors in our convents). We need to establish a sacred precinct in the church around the Eucharist and confessional. From there we will fight. From there we will forge the renewed Catholic male and female personalities so necessary for a culture of life.

This means something real. It would mean a reform of those under your authority. It would entail not the easy national note of public protest, but the difficult hand of justice and authority rendered over those closest to you. Like the first Levitical priests commanded to reform a people gone mad with idolatry. To prove their loyalty to a living God who really existed, they had to “slay a kinsman, a neighbor and a friend.” When your predecessor, Cardinal Bernardin, came to Chicago he told the priests: “I am Joseph your brother." This cannot be your message. The priests of Chicago need a father to cleanse their corrupted ranks, just as ordinary Catholics need a shepherd to slay the wolves and false shepherds about them.

You have authority. Your staff is not a walking stick for an old man brooding about retirement. It is a weapon to smite lions outside the gates, as well as the wolves masquerading as shepherds and sheep inside the fence. Clean your priesthood. Defend the Eucharist. The breakdown of purity and protection is much deeper and more scandalous in our own ranks than this insurance calculation by the federal government. The President’s chief advisors on all things Catholic have been long-time supporters of abortion, as well as public communicants when it is deemed opportune. They confide to the President:


"The people are with us. We go to Mass and receive Communion. Our parish priests and bishops know our public positions on abortion and homosexuality. There are many ways to be a Catholic, and our full participation in the Eucharist whenever we desire it is the lived-out symbol of this 'big tent' truth. We represent Catholics and have proved it in our elections."

When Archbishop 'Dagger John' Hughes (d. 1864) was threatened by truly violent religious persecution in New York, he surrounded his churches with parish men ready and willing to fight to protect the sacred. Do you have any such men amidst your priesthood who would fight to get our universities and parishes back from a generation who has flattened the sacred and emasculated the protectors? Archbishop Hughes did not prophesy the martyrdom of his successors. He risked his life so they would be safer.

Do not listen to the accusers. Our priesthood is not too male -- it isn’t masculine enough. Little wonder that Catholic women no longer see their bodies and wombs as sacred precincts which must be defended by the personalities of Virgin, Mother, and Martyr. Where do they see manly Catholic Bishops protecting the sacred precincts of Holy Orders and the Eucharistic altar?

Don’t play the prophet and protester -- be the protector King and Priest. The best way you can teach our president the proper exercise of authority is to defend the sacred goods that have been bequeathed you. President Obama is not an evil man. He thinks of himself as a friend and ally of Catholics. His understanding of Catholicism is not from a textbook or anti-Catholic tirades. His is a first-hand experience, and it is the bitter fruit of the deep corruption of your own archdiocese.

It is the secretive compromise of our priests and nuns, which spawned the arrogant public Catholic feminist officials and the male Catholic geldings at their sides in the press and clergy. A culture creates personalities, which carry the truths and claims for the good of that culture. Do not pick at the splinter in the President’s eye -- concentrate on the redwoods in the eyes of Speaker Pelosi, Sister Keehan, Vice President Biden, and Father Pfleger.

Did you really say that you would die in bed, and your successor in prison, and his successor in public martyrdom? The red you wear means you are supposed to take the first bullet, not leave it for the guy after next. A general can’t retire from the battlefield and predict disaster for his grandson.
You are wearing red because you are called to the martyrdom you have thus far avoided. It is the pain and anguish that will come if you take on the corruption in your own diocese!

Call a Fast. Let us enter this sacred season. The Holy Spirit is not done with you, Father.