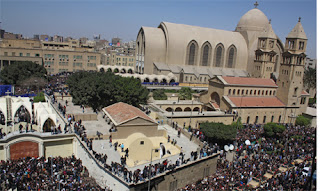 The escalating murders of Copts in Egypt (the largest Christian group in the Middle East) reveal the continuing emasculation of Christian authority in public life that followed the separation of Church and State as religious and protective institutions.

It is good there has been a separation. But it has been a disaster for the most vulnerable – because the Christian men in the nations and the men of the Church have not formulated a more effective protective strategy for those who face religious persecution. (“Religious persecution” here is the old-fashioned kind: you get murdered trying to worship God.) The strategies for the unarmed Church and the armed nations must be very different, and yet complementary, to face this growing threat. Jesus reminded Pilate that if His Kingdom were of the world, his men would have fought back.  Nations are of this world. We are of the time (the real meaning of secular). The nations must use the sword justly and prudently – at home and abroad. Blessed are the Peacemakers, for they shall be called sons of God.

The churchmen do not use the sword. Their Kingdom is of a higher order – their weapons more powerful. But if they will not organize military protection for the slain, certainly they must place themselves in nonviolent confrontation with the slayers. How long can a white cardinal ask that yet another dark-skinned woman fill his place of martyrdom? The meaning of the red garments of the cardinals of the Catholic Church is that they are willing to be martyred. This was the Christian witness of Reverend Martin Luther King. Non-violent confrontation with the evil of racism was “meant to create tension.” It was a strategic tactic to dramatize an evil, and involve onlookers in an injustice that for years had seemed another’s problem. The middle-class black ministers and their flocks put themselves, as Christ had, in the place of the persecuted.

The non-violent protesters never asked the state legislators to disband their police departments! They were not fighting for a universal pacifism. Their non-violence was a way of placing them in a redemptive encounter with evil. They did not ask legitimate authority to renounce the use of force, but illegitimate authority to renounce hatred. No one in that deeply religious movement objected to President John Kennedy sending federal troops in 1962 to integrate the University of Mississippi. The armed federal marshals he first sent did not have enough protective force to prevent violence -- so he sent more military firepower to establish the tranquility of order which was necessary for justice.

The bravery of the nine children who integrated an Arkansas high school a decade earlier was supplemented by airborne federal troops and a nationalized state guard under the orders of President Eisenhower. They were all armed. No one asked to “give peace a chance.” 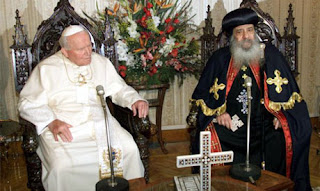 Sending a few cardinals to Saint Mark’s Cathedral in Cairo (seat of the Coptic Orthodox Pope; the late holder of the office is shown welcoming John Paul in 2000) would be an ecumenical gesture of unprecedented force and meaning. It would be the kind of action that could also change the kind of man seeking the cardinal’s red. Martyrdom has always been an antidote to ecclesial careerism, which Pope Francis so abhors.  We know Cardinal Mahony has no public duties to keep him tethered to Los Angeles, and he showed us he could travel by showing up at the papal conclave. There will be some old curial hands who could join him in this act of witness for a year or two.

These intramural Catholic concerns aside, the Copts of Egypt need a strong gesture from the papal office of Christian unity.  Church unity can mean nothing if it does not mean their danger is our danger. These risky acts of witness are another reason that bishops are celibates.

Who will play the role of armed authority? Will it be Pharaoh or will a new Exodus be necessary? That is a question for the nations. Only dramatic action by the Church will force them to answer. This will cleanse the nations as well, by forcing Islamic nationalists to show their true colors – while focusing the protective authority of once Christian nations on more fundamental freedoms than the strange concerns which have become hobbyhorses of the elites. 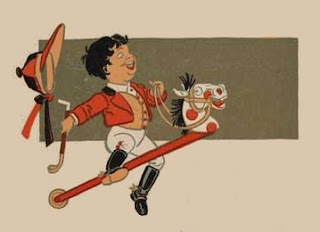