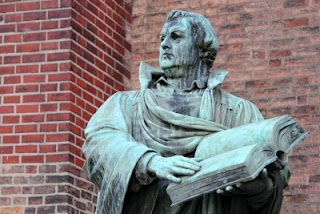 Martin Luther (d. 1546) declared sola fide – ‘faith alone’ – as being “the article with and by which the church stands.”

Several years ago, Pope Benedict said: “Luther’s expression of sola fide is true if faith is not opposed to charity, to love.”

In other words, as Galatians 5:6 has it, “faith working through love.”

The obedience of faith: Saint Paul never separates the two.  Proclaiming “faith alone” is like speaking of the mercy of God, and never bothering to mention His justice!


This is how Paul begins the Letter to the Romans:


“…we received grace and apostleship to call people from among all the Gentiles to the obedience that comes from faith.”  (1:5)

And how Paul ends it:


“…the mystery that was kept secret for long ages but has now been disclosed…according to the command of the eternal God, to bring about the obedience of faith..”  (16:26)


Of course Saint James, in his letter (2:24), explicitly states “that a person is justified by works and not by faith alone.”

[Saint Paul, who didn't hesitate to employ the word “alone” when necessary, chose not to include it in Romans 3:28 (“For we hold that one is justified by faith apart from works of the law.”)
But that did not prevent Martin Luther from inserting the word.  Here is how he defended that move in part:
“I know very well that in Romans 3 the word ‘solum’ is not in the Greek or Latin text – the papists did not have to teach me that… If the translation is to be clear and vigorous, it belongs there.”]