Pence argues that we need to open our eyes to the centrality of election (setting aside) -- and of "casting out" -- in both Holy Scripture and the physical universe. They are related, in that human history occurs within a central action of God casting out the rebellious Lucifer.

The fallen angel has dominion over the physical world. The first appearance of matter and energy 13.7 billion years ago in a event known as the Big Bang is described by many physicists as the unraveling of the four basic forces in nature. From the time of this explosive event -- the universe continuing to expand and to dissipate, to grow colder -- this stark emptiness is the dominant fact of physical creation.  The accretions of matter which are hot burning stars are all going in the same direction -- toward colder, more dissipative states.  This is called the arrow of time.

The setting aside of the earth and the creation of life was a drawing inward of matter in the midst of chaos...

All things are liturgical. Sacrifice has three components: a setting aside, a sacred killing, and communion.

The earth was "set aside" from the universe.  Then God set aside life nearly four billion years ago in the form of an individual cell with tremendous potential for growth, division, and transformation of forms. The setting aside of the biosphere -- the particular configuration of the earth within our solar system for life, and the in-drawing of matter into the extremely complicated life form which worked toward its own end -- these are countering acts of setting aside amidst a universe being cast out.

Contra the ideas of Father Pierre de Chardin (d. 1955), almost all of matter is being separated out. He underplayed the importance of election and overplayed the notion of convergence.

Progressive Christians ask the Church to be the place of the smothering "vast embrace": open door, open arms, universal salvation.  All space is sacred, all time is sacred, and all 'truths' are subjectively authentic.

The liturgical idea of setting aside sacred space for a killing and communion is a very different notion. 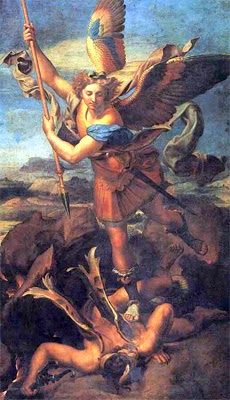 [painting by Raphael]
Posted by Farmer at 3:15 PM

Email ThisBlogThis!Share to TwitterShare to FacebookShare to Pinterest
Labels: Nature and the Sacramental Order