Map on Monday: Invasion of Poland

Today marks the 75th anniversary of Nazi Germany's invasion of Catholic Poland in 1939 and the beginning of World War II. Not long after, the Marxist Soviet Union invaded from the east. Here is a map of the twin invasions and ultimate partition of Poland: 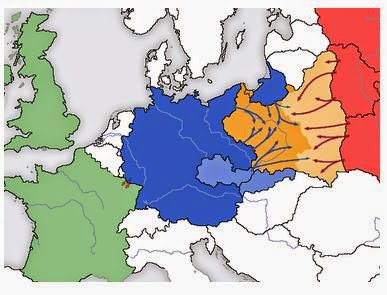 As the map shows, Poland was only the most recent nation conquered by the Nazis. They had already taken Austria in March 1938 and began seizing Czechoslovakia later that fall.

The partition of Poland between the Nazis and the Soviets was itself part of a larger non-aggression pact between Germany and Russia. This pact with the Soviets gave the Nazis the opportunity to turn its military westward for the conquest of France. By the autumn of 1940, the Nazis had done in one year what the Germans had failed to do in all the years of World War I.

As one article points out, Poland would suffer a harsh fate during the war and the later Communist occupation. Archbishop Fulton Sheen said: "Poland was crucified between two thieves: the Nazis and the Soviets."
Posted by Andrew Lynch at 6:00 AM