Map on Monday: The British Empire

The map above (click to enlarge or click here to see the original map) depicts the territories once belonging to the vast British Empire. Declared as "the empire on which the sun never sets," the British Empire ruled over one-fifth of the world's population in 1922 (458 million people) and covered almost a quarter of the globe's land areas (13,012,000 square miles). A casual glance at the map reveals the global impact of the English language long predates the postwar rise of the United States.

Although its expansion began much later than that of the Spanish and Portuguese empires, the British Empire began to catch up by establishing colonies in North America and the Caribbean. The rise of the joint-stock companies of the colonial era in Britain and the Netherlands led both nations to challenge Portuguese dominance in Asian trade and territorial control. American independence further pushed the British Empire to the Far East and Pacific. During the 19th century, the British Empire gained impressive influence in Africa and the Mideast.

Despite its impressive military, economic, and territorial might, Great Britain found itself bankrupt following the two world wars (indeed, it only finished repaying a multi-billion dollar postwar loan to the United States in 2006). Today Great Britain controls fourteen, semi-autonomous areas entitled the British Overseas Territories. Below is a map of these territories (click to enlarge): 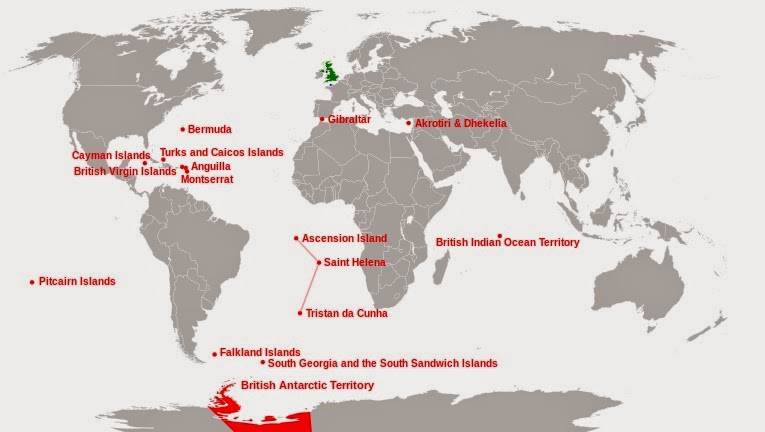