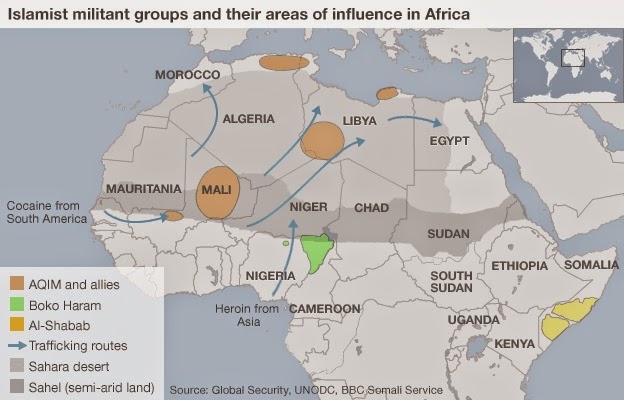 The map above depicts the area of operations for the three leading Islamic terrorist organizations in Africa, along with the relative geography in which they operate. One may find it useful to compare this map to a civilizational fault line map in order to see where Islamic north Africa meets the Christian south.

Northern Africa is religiously dominated by Islam and geographically dominated by the Sahara and Sahel (the lands in which the desert transitions to the Sudanian Savanna; Sahel comes from Arabic word sāḥil meaning coast as the plant life of the Sahel acts like a coast for the "waters" of Saharan sand). It is in this area that the terror group Al Qaeda in the Islamic Maghreb (AQIM) operates. Its usage of the term Maghreb refers to the lands of northwest Africa from Libya to Mauritania. AQIM has raised 90% of the $50 million in the last decade through ransoms. Originally a Sunni Salafist movement, the group joined with Al Qaeda in 2007 and continues to be a threat in northern Africa.

Fighting to overthrow the Nigerian government is Boko Haram. Also going by the name Nigerian Taliban, the goal of Boko Haram is to install a new government in which Sharia Law is the law of the land. Here it is important to remember that Nigeria is a microcosm of the African continent with a predominantly Muslim north and a Christian south. Boko Haram operates in the northeast corner of Nigeria but also has immediate access to Cameroon, Chad, and Niger.

Along the eastern coast of Africa is the nation of Somalia and the terror organization Al-Shabaab operating in its south. Meaning "The Youth", Al-Shabaab's name recognizes the young, male demographic that fills its 7000-9000 member ranks. Like Boko Haram, Al-Shabaab seeks to impose Sharia Law on those within its control - and like AQIM, Al-Shabaab merged with Al-Qaeda. Al-Shabaab is, however, a clan-based organization that leaves it without any central command structure. In addition to its internal divisions, Al-Shabaab has local ambitions within Somalia and is therefore not seeking wider aims within Africa itself.

In addition to the terrorist organizations operating in northern Africa, this area is also used for drug and arms smuggling out of Latin America and Asia.
Posted by Andrew Lynch at 6:00 AM