"Also known as the Continental flag, it is the first true U.S. Flag.

"It combined the British King's Colours and the thirteen stripes signifying Colonial unity. George Washington liked this design so well that he chose it to be flown to celebrate the formation of the Continental Army on New Years Day, 1776. On that day the Grand Union Flag was proudly raised on Prospect Hill, near his headquarters at Cambridge, Massachusetts." 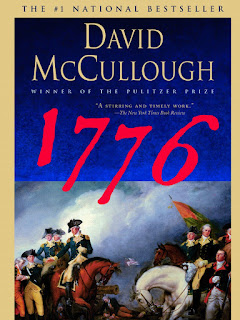 Here is a six-minute radio interview with Mr. McCullough when the book came out a decade ago.


The 'Guardian' newspaper in England published this review:

Might the Americans have lost the War of Independence? They very nearly did. This book is the story of how close George Washington, as commander of the American army, came to defeat in the terrible year of 1776 which also saw the Declaration of Independence. At the end of that year, he assumed that the British, who had chased him all the way from New York, were about to cross the Delaware river and capture Philadelphia, capital of the revolution. He wrote that all the enemy were waiting for was 'ice for a passage, and the dissolution of the poor remains of our debilitated army'.

But Washington was wrong, as he frequently was about military things. David McCullough's account bears out the saying that this war was lost by the British rather than won by the Americans; the book could have been subtitled 'Failures to Pursue'. When Washington wrote those words, he did not know that General Howe, the British commander, had already decided that it was getting too cold to carry on fighting. The war season was over. He would go back to New York and mop up Philadelphia and the Yankee army the following spring.

Howe had thrown away victory before. In August, he had let the defeated American army escape after the battle of Brooklyn (or Long Island). But his failure to take Philadelphia when he could was worse. The British never grasped that it was good publicity which kept Washington's small army in the field, by producing fresh flows of volunteer reinforcements. As soon as Howe's incredible decision was known, Washington snatched the opportunity for a 'brilliant stroke'; he came back across the Delaware and won two small but dazzling victories over Hessian and British forces at Trenton [Dec 26, 1776] and Princeton [about a week later]. They were anything but decisive in military terms. The war dragged on until the British surrender at Yorktown in 1781. But after Trenton, the American public realised that they could win and must win. The corner had been turned.

A British reader has to know a bit of history before starting this book. McCullough is not trying to tell the story of the American Revolution or even of the whole War of Independence. The battle of Bunker Hill (1775) is over when the book begins, with the British locked up in Boston by a cheerful, disorderly little army with almost no gunpowder.

Fortunately for 'His Excellency', as George Washington was known, the British had not got round to occupying the Dorchester Heights above the city. The Americans, showing true inventive genius, went 300 miles to the abandoned Fort Ticonderoga, extracted its enormous guns and towed them back over snowy hills and frozen lakes [arriving toward the end of Jan 1776]. When they opened fire from the heights, Howe at once conceded checkmate and abandoned Boston.

Next came Washington's defence of New York. An enormous British force of warships and troop transports assembled offshore meant that Washington had no long-term hope of defending Manhattan. He hesitated and made bad mistakes. In their only stroke of first-class generalship, the British landed on Long Island and pulverised his army. But Howe's 'failure to pursue' allowed Washington to get the survivors back across the East River in small boats: 'America's Dunkirk'.

There followed long and complicated campaigning in what is now New York's outer suburbia, as the Americans evacuated New York and were driven slowly back, losing battle after battle, until they crossed the Hudson into New Jersey. From there, Washington and his dwindling, exhausted army retreated southwards to Newark and then across the Delaware. Congress had already fled from Philadelphia to Baltimore. Washington thought the army game was up; it would have to be guerrilla warfare in the Alleghenies. But then Howe stopped and blew a whistle for half-time.

This is a well written, conventional war history, illustrated with quotations from the letters and diaries of men and some women on both sides. The American witnesses are wonderfully observant and articulate; they were mostly well-educated volunteers who already 'enjoyed a higher standard of living than any people in the world', as McCullough reminds us. But narrowing the subject to one year has drawbacks as well as advantages.

The plus is that McCullough is offering one more irresistible narrative of a fabled Long March, from hope through despair to hope again... The minus is the lack of political background, which is perfunctory. So New York and Long Island were full of 'loyalists'? What were their own dreams for America and what happened to them in the end? So Washington was a slave-owner and a friend of liberty? Plenty has been written about that elsewhere, but at least a sample should have entered this book.

McCullough inserts profiles of his leading actors. Some work better than others. George Washington, a man of marble famously hard to penetrate, remains opaque. There's any amount of secondary evidence that his men adored him, that he had the gift of transmitting confidence. But why and how?

What McCullough does show is that Washington had the incredibly rare gift of learning from the criticism of subordinates. After Long Island, he discovered that some of his commanders thought he was hopelessly indecisive. He considered this, apparently agreed, and simply made himself more decisive.

In contrast to 'His Excellency', other leaders emerge in sharp relief. None is more appealing than the fat young Boston bookseller, Henry Knox, an Ulster Scot with a booming voice who already weighed nearly 18 stone [252 pounds] at the age of 25. Only in a revolution, and especially a can-do American revolution, could this [porker] turn into a wonderful general who began by thinking up and carrying through the mad feat of towing the guns from Ticonderoga and ended up as one of the victors at Yorktown.


McCullough doesn't ask himself what would have happened if Washington had been crushed in 1776. But Knox gives the answer. America was already independent. What mattered was that Americans should realise it. The British could be dealt with, if not now, then later. Even if they still won battles, they were becoming history.

UPDATE: I have driven the highway route from the Albany area through the entire length of Massachusetts. Even though I was cocooned with plush comforts, it still seemed as if Beantown would never come into view.

What Knox and his men accomplished is simply astounding.

What was their toughest stretch? Traversing the Berkshire Mountains once New York was behind them.

Let's close this out with an appropriate colonial fiddle tune. 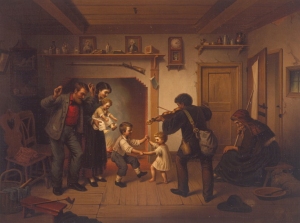