Friday BookReview: why January 8th is nearly as important as Fourth of July 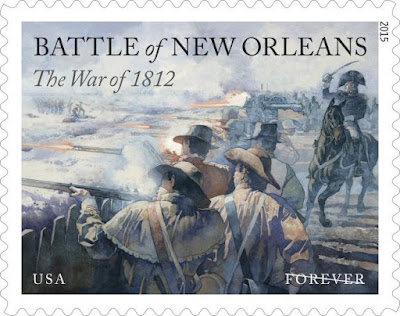 In the year 1815 -- on the 8th day of January -- the United States showed the world the vibrancy of her sovereignty, thanks in large part to the brilliance of Andrew Jackson. (Four months earlier the British had torched much of Washington, including the White House and the Capitol).

"The victory in New Orleans was a defining coming-of-age moment for the young American republic... It was our nation's final and true declaration of independence."

Take a look at this six-minute overview of the clash of the two armies on that day.

When Robert Remini's book about the Battle of New Orleans came out in 1999, the NY Times printed this glowing review:

It was a battle that possessed all the ingredients of a grand Hollywood epic film: a home-grown, popular military hero nicknamed Old Hickory, whose brilliant generalship on the battlefield led to his election as president of the United States; a ragtag militia of regular and citizen soldiers that included Creoles, frontiersmen, Indian sharpshooters, free blacks, the people of New Orleans, the notorious pirate Jean Lafitte and his renegade privateers, all marching into battle to the strains of ''Yankee Doodle'' and ''La Marseillaise.'' Arrayed against them were the mighty British Navy and the most elite army regiments...

It should have been a rout, this unequal battle between some 8,000 British regulars supremely confident of crushing all opposition in their path and Andrew Jackson's incongruous group of defenders, whose numbers were barely half that of their enemy. Fought in the most unlikely of places, the Battle of New Orleans possessed none of the ingredients of the great set-piece battles of the Civil War or the two world wars. The bloody month-long clash took place along the banks of the Mississippi River on the Plains of Chalmette below New Orleans in December 1814 and January 1815. It was the climactic battle of America's ''forgotten war'' of 1812, and its unlikely outcome changed the course of American history.

Despite winning independence in 1776, the United States was still regarded with disdain by the great European powers, which believed the upstart new nation had a very insecure future as a democracy. Britain was still smarting from the humiliating loss of its colonies and determined to crush the United States once and for all. Its intentions were unmistakable: ''to destroy and lay waste the principal towns and commercial cities.'' To that end, the British encouraged Indian insurrection and British ships violated American sovereignty with impunity, seizing American vessels and impressing their sailors to help fight Britain's war with Napoleon.

By late 1814, the War of 1812, which emanated from these long-simmering disputes, had left the Eastern United States under naval blockade, and the nation was on the verge of losing its precious independence. The British intended to dismember the Republic by having one army take control of the Mississippi River and then join with an army moving south from Canada. However, for their grand strategy to succeed, the British had to capture the bustling, multiracial port city of New Orleans.

Robert V. Remini, whose superb three-volume biography of Andrew Jackson won the National Book Award, here turns to Jackson's prowess as a military commander, during a seemingly lost period of our history when, in his words, ''the United States had heroes and reveled in them.'' When he learned of the British intention to seize New Orleans, Jackson responded by thundering, ''I will smash them, so help me God!''

Smash them he did. British aspirations were doomed to failure when their commanders played directly into Jackson's hands by relying on the outdated stratagem of fighting in massed formations. Cleverly prepared defenses and unorthodox tactics enabled the Americans to repel repeated British onslaughts, while Jackson's Tennessee marksmen picked off any redcoat who strayed into their sights. The result was a massacre from which, Remini notes, ''His Majesty's army lay in shreds.'' 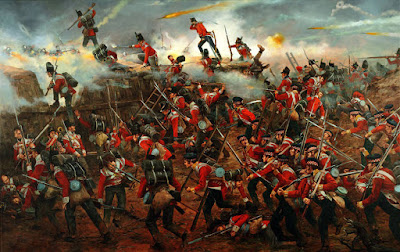 Under Jackson's remarkable leadership the American victory at New Orleans was one of the most improbable tales of audacity, courage and battlefield genius ever recorded. Two of the four British generals, including the commander in chief, were killed, and another was gravely wounded. This was an ignoble conclusion to the invasion of Louisiana and a stake in the heart of the British campaign to vanquish the former colony. Instead, the remnants of a once proud army were compelled to retreat and sail away empty-handed.

It was America's first great military victory and a defining moment for the nation. At a single stroke, Old Hickory had established himself as one of America's greatest generals and the savior of the nation. For some time it was thought that Jan. 8, 1815 -- the day all hope of a British victory ignominiously ended -- would be commemorated as the date the United States won its second war of independence. One newspaper proclaimed: ''Who would not be an American? Long live the Republic!''

Sadly, Jackson's great victory at New Orleans did not stand the fickle test of time in the American experience, in part because it actually occurred after a peace treaty concluding the War of 1812 was signed in Ghent in December 1814. Yet, as Remini declares, ''In that one glorious moment the nation had demonstrated that it had the strength, will and ability to defend its freedom and prove to the world that it was here to stay.''

This is an exceptional book that combines impressive scholarship with a riveting narrative. Hollywood may never make the movie, but in ''The Battle of New Orleans'' Remini has brilliantly documented a landmark battle that has, for too long, been buried in the unremembered pages of American history. 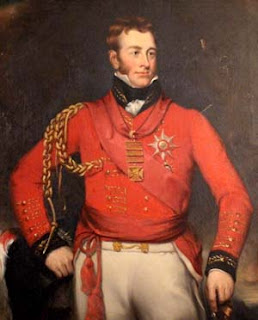 The British commander, Edward Pakenham (pictured), was killed in the battle. He was 36 years old.

A few months later in that year of 1815, a dozen miles south of Brussels at a place called Waterloo, Pakenham's brother-in-law -- the Duke of Wellington -- entered the immortal pages of history by vanquishing Napoleon. (One of those who had long admired the Corsican was Andrew Jackson).

UPDATE: Check out this C-SPAN interview with Mr. Remini at the Hermitage, the home of Old Hickory outside of Nashville.

Here are some of the lines from the opening page of his biography:

"At one time in the history of the United States, General Andrew Jackson of Tennessee was honored above all other living men. And most dead ones, too...

"No American ever had so powerful an impact on the minds and spirit of his contemporaries as did Andrew Jackson. No other man ever dominated an age spanning so many decades. No one, not Washington, Jefferson, or Franklin, ever held the American people in such near-total submission." 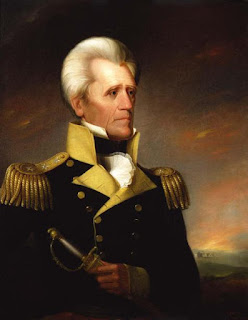 America's greatest novel mentions Old Hickory (who had died six years before MOBY-DICK was published) -- specifically, how the Almighty had brought him from backwoods obscurity to glory:

"Thou who didst pick up Andrew Jackson from the pebbles; who didst hurl him upon a warhorse; who didst thunder him higher than a throne!"