Map on Monday: THE ANGLICAN CHURCH 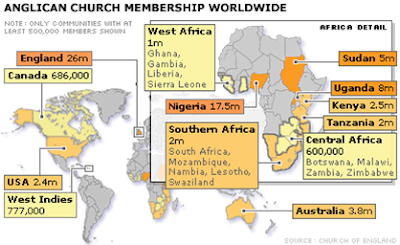 Although the above map only displays nations whose Anglican communities number at least 500,000 members, the map shows just how large Anglicanism is compared to its English homeland. A quick glance at the numbers reveals that Africa alone accounts for at least 38.6 million Anglicans. Compare this to the 26 million Anglicans living in England and it is easy to understand how the US Episcopal Church was voted out of the Anglican Communion for its stance on homosexuality. This is a topic Anthropology of Accord has written on numerous times:


Africans and Anglicans: A Catholic Anthropology for the Priesthood
Religion and Geopolitics Review: January 23

The map also reveals - again unsurprisingly - the correlation between the old colonies of the British Empire and the areas in the world that today have large Anglican populations. For a comparison, see our Map on Monday: THE BRITISH EMPIRE.