"When John Quincy was 11 he accompanied his father to Europe on a diplomatic assignment. It took them six weeks to cross the Atlantic.

His father died on July 4th, 1826, when John Quincy was president.

John Quincy was fluent in French, Dutch and German. He was proficient in Italian, Latin and classical Greek.

No one came to the presidency with a more sparkling resume than John Quincy Adams."

[But of the first seven presidents, only he and his father were denied second terms by the voters]. 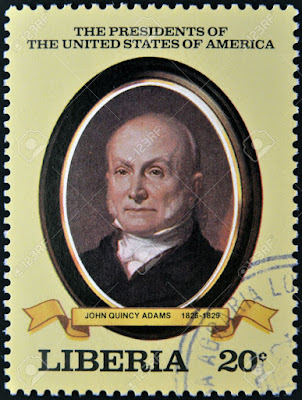 Some excerpts from a review of the biography by James Traub:

In June of 1775, when John Quincy Adams was almost 8 years old, his mother, the indomitable Abigail, took him by the hand up a peak in Braintree, Mass., to view from afar the battle of Bunker Hill. Over 70 years later, in February 1848, "Old Man Eloquent," as he was then called, collapsed at his desk in the House of Representatives and an obscure one-term congressman named Abraham Lincoln was assigned to the committee making the funeral arrangements. Many of the eulogies to Adams identified him as the last remaining link to the founding generation. James Traub’s splendid new biography, John Quincy Adams: Militant Spirit, asks us to envision him as the missing link between the creation of the American Republic and its near dissolution in the Civil War.

John Quincy Adams is easy to admire, but difficult to like, much less love... Ralph Waldo Emerson described him [as taking] sulfuric acid with his tea. Even his own adoring son, Charles Francis, acknowledged that "he makes enemies by perpetually wearing the iron mask."

The mature Adams, with all his sharp edges and impossible standards of perfection, was very much a product of the parenting practices of Abigail and John. Many American boys — now also girls — are raised to believe that they can grow up to become president of the United States. John Quincy was raised to believe that anything less rendered him an abject failure. Abigail was actually tougher on him than John, and one can only wince at her admonition, written after her 10-year-old son had completed a risky voyage across the Atlantic with his father: "For dear as you are to me, I had much rather you should have found your grave in the ocean you have crossed . . . rather than see you an immoral profligate or a graceless child." John Quincy never had a childhood, nor was he raised to be a happy man. He was instead fashioned like a hardened steel projectile, aimed at the center of American history.

The sheer scale of Adams’s career ­poses narrative problems for any aspiring biographer: minister to four European capitals, senator, Harvard professor, secretary of state, president, representative in the House. And even that listing is deceptively simple. More than 60 years ago the Yale historian Samuel Flagg Bemis required two fat volumes to record the public story, which flowed through diplomatic nooks and crannies in multiple venues and stretched from the Louisiana Purchase, through the Monroe Doctrine, to the Mexican War and beyond.

Traub begins with the assumption that the career should be folded into the life, not the other way around. He therefore makes Adams’s journal his central source, the prism through which to view the man. He provides chapter-length accounts, for example, of the Monroe Doctrine and Adams’s argument before the Supreme Court defending African prisoners in the Amistad case. Some scholarly specialists might ask for more details, but I found his versions reliably thorough, blissfully bereft of jargon and nicely paced to blend with the private story.

Which is to say that we glimpse Adams swimming with nothing but goggles in the Potomac at dawn, writing an epic poem about early Ireland, planting hundreds of fruit trees on the trips back to Quincy and, most important of all, interacting awkwardly with Louisa Catherine Adams, his wife of 50 years [born in London in 1775]. Louisa Catherine was an orchid of a woman, indispensable as John Quincy’s diplomatic partner, with a social sense that he altogether lacked, a bit fragile (nine miscarriages) and the hummingbird to Abigail’s eagle. Traub devotes more space to Louisa Catherine than any previous Adams biographer, in part because she is so omnipresent in the journal. 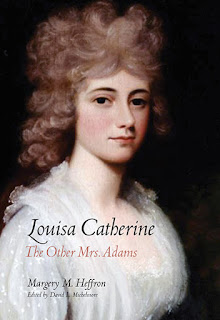 A word about that journal. It is over 14,000 pages long, and without much question the most revealing record by a prominent figure in American history. Adams himself expressed his own amazement at its scope and length: "There has perhaps not been another individual of the human race, whose existence from early childhood to fourscore years has been noted down by his own hand so minutely as mine." Traub is the beneficiary of heroic work by the editors of the Adams Papers at the Massachusetts Historical Society, who have transcribed and digitized the entire journal, allowing Traub to read it on his desktop.

As Traub explains, the presidency was not the capstone of Adams’s career so much as an awkward interlude. This is ironic, since he had been groomed for the office since childhood. But he violated his most cherished principles by effectively stealing the election from Andrew Jackson in a back-room deal with Henry Clay after the decision went to the House. And his presidential agenda was a double-­barreled anachronism: 30 years too late, as an echo of the Hamiltonian program of the 1790s; over a hundred years too early, as a preview of the New Deal. It proposed an activist federal government that promoted vast "internal improvements" (roads, canals) and public projects that featured a national university. In Jacksonian America such a robust expression of government power was dead on arrival. Traub endorses the verdict of the British historian George Dangerfield, describing the Adams presidency as "a rather conspicuous example of a great man in the wrong place, at the wrong time, with the right motives and a tragic inability to make himself understood."

Reverse all the ingredients in that verdict and you have an accurate assessment of John Quincy’s performance as secretary of state. His great achievement was to translate Washington’s vision in the 1796 Farewell Address — neutrality abroad, unity at home — into a grand strategy in which unity at home came to mean consolidation of American control over most of the North American continent. All the political templates that moved against him domestically shifted in his favor diplomatically: Europe after Waterloo craved peace and stability, and Spanish decline continued, rendering her American possessions indefensible, as Adams made abundantly clear in negotiating the Transcontinental Treaty of 1819. Even British ascendancy proved a huge American asset, effectively providing the naval protection that made enforcement of the Monroe Doctrine’s policy of hemispheric isolation possible.

But the most famous Adams utterance, delivered on July 4, 1821, emphasized the limitations of American expansion, chiefly because he believed that republican principles were unlikely to flourish in foreign soil. George Kennan, the architect of the "containment" strategy during the Cold War, loved to cite these words about America’s proper role in the world: "She does not go abroad in search of monsters to destroy. She is the well-wisher to the freedom and independence of all. She is the champion and vindicator only of her own."

His long service in the House has the appearance of a quirky epilogue, but in fact was his finest hour. His one-man crusade against the gag rule was part of a larger campaign to insist that slavery be placed on the political agenda as the major piece of unfinished business left by the founders. All the irritating Adams characteristics worked to his advantage here, as his arrogance, stubbornness and sheer audacity made him, as one frustrated Virginia slaveholder put it, the "acutest, the astutest, the archest enemy of Southern slavery that ever existed." 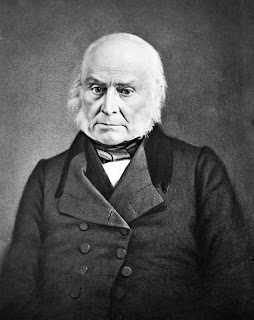 Along the way he left two political legacies that Lincoln subsequently embraced. He insisted that the Declaration of Independence, not the Constitution, was the seminal document of the American founding, making slavery a self-evident anomaly that must be put on the road to extinction. He also insisted that he was not an abolitionist, because a frontal assault on slavery most probably meant ending the union. Therefore, slavery must be attacked on the flanks, which Lincoln eventually did by opposing its extension to the western territories, but not its existence in the Deep South.

Traub gives the last word to Louisa Catherine, who outlived her husband by four years. (Both houses of Congress closed down in her honor, the first time this tribute was paid a woman.) Traub appears to endorse her final judgment as his own, concluding that John Quincy Adams should be found "exasperating, tendentious, self-absorbed and yet, in the end, magnificent."