Map on Monday: NATIONS WITH NUCLEAR WEAPONS AND GEOGRAPHY OF NUCLEAR TESTING SITES (1945-2016) 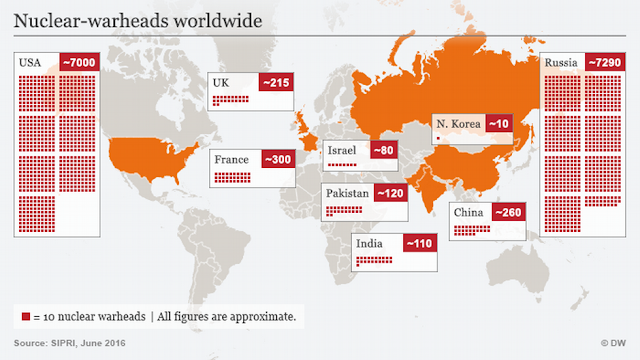 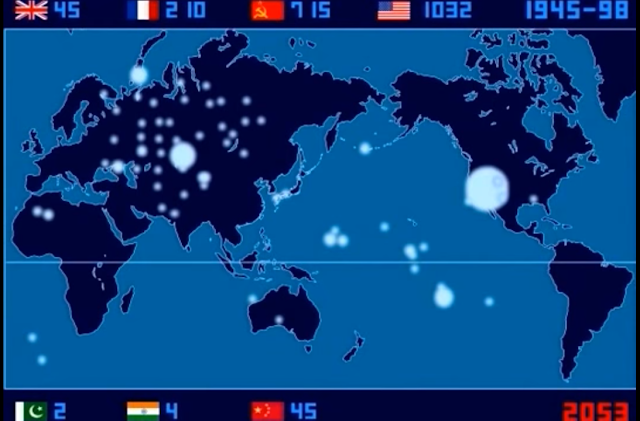 While many are familiar with the list of nuclear powers, few know anything about the vast number of nuclear bomb detonations or where they occurred. The map above is a screenshot of a video called "A Time-Lapse Map of Every Nuclear Explosion Since 1945." The video is somewhat lengthy (and it ends before North Korea's testing), but it is a very good representation of the temporal-spatial dimensions of nuclear testing.

If you asked someone where the United States tested its nuclear weapons, most would say the American Southwest. Although this is true, few are familiar with the two underground nuclear detonations that took place in the state of Mississippi in 1964, or that the United Kingdom also tested nuclear weapons in the United States. In fact, the last British nuclear detonation took place in the state of Nevada. French nuclear testing in Algeria and British nuclear testing in Australia make sense given their colonial holdings -- yet it is not well-known that the Sahara and the Australian Outback were home to many nuclear blasts.


The oceans have also hosted nuclear tests. One such example, Operation Crossroads, took place on July 25, 1946, at Bikini Atoll. Nuclear detonations have not only taken place under the Earth's surface, but even high above. An American test called "Starfish Prime" took place in outer space on July 8, 1962. It was the largest nuclear blast to take place in space (the detonation occurred at an altitude of 250 miles). The blast was seen through cloud cover in Honolulu almost 900 miles away.