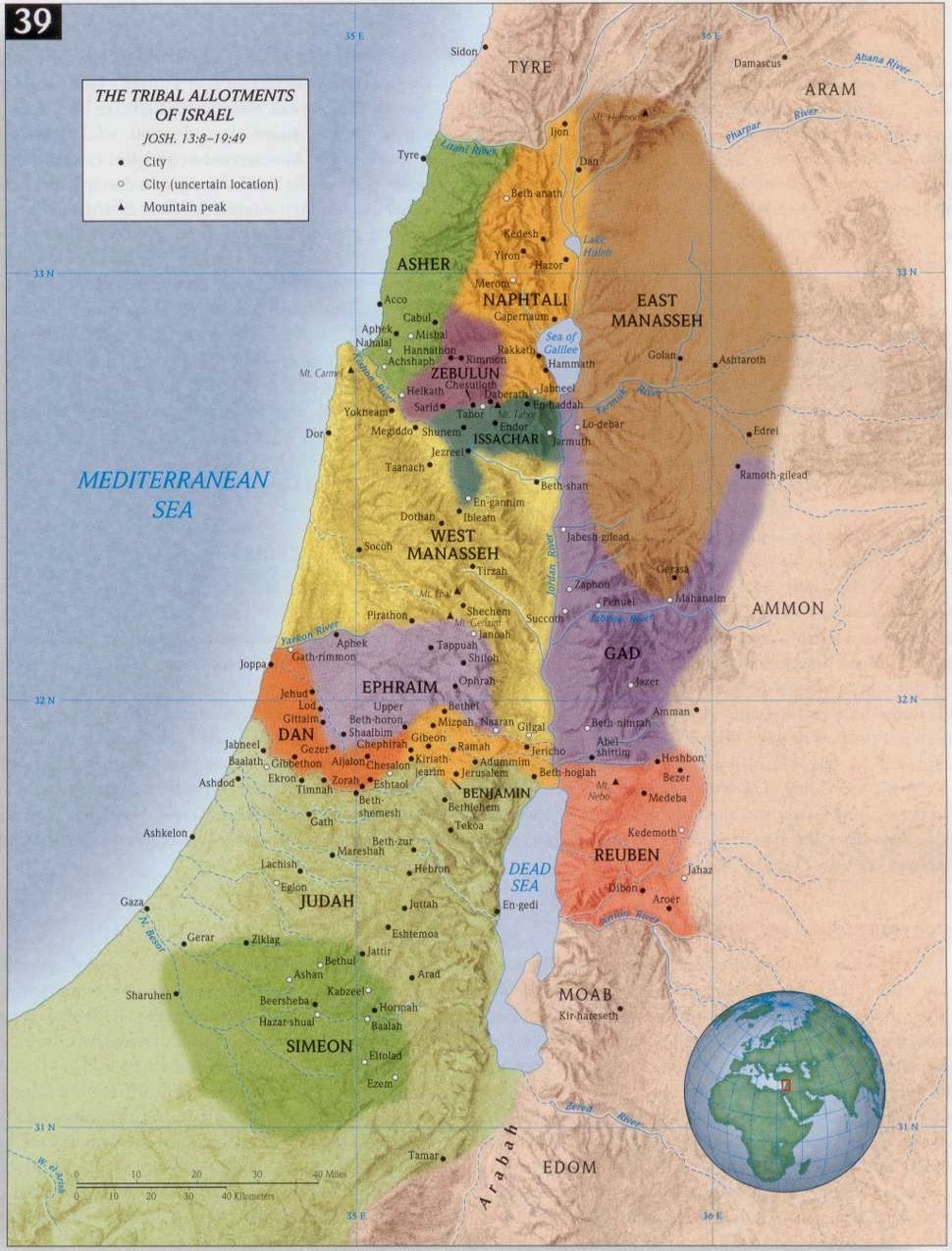 The map to the left (click to enlarge) displays the division of the Promised Land between the Tribes of Israel. The world map at the bottom right corner locates Israel at the eastern edge of the Mediterranean Sea along the important trade routes connecting historic Mesopotamia with Egypt to Israel's southwest and with Greece and Rome to its west across the seas.

Geographically, Israel was split into east and west by the Jordan River with the Sea of Galilee in the north and the Dead Sea to the south. The area as a whole may be divided into four geographic regions: the coastal plains along the Mediterranean, the central hills (which run from the peaks in the north's Golan, through the hilly Galilee, down to the hill country of Judea in the south), the Jordan Rift Valley connecting the Sea of Galilee to the Dead Sea, and the Negev Desert in the south (which claims more than half of modern Israel's land area).

Recall that the twelve Tribes of Israel are the descendants of the twelve sons of Israel (renamed from Jacob). Of these twelve sons, lands were allotted to the tribes of Reuben and Gad on the east side of the Jordan while Asher, Naphtali, Zebulan, Issachar, Dan, and Benjamin were given lands on the west side of the Jordan and in the northern part of the Promised land. To their south were the lands of Judah and Simeon. Of Israel's other two sons - Joseph and Levi - the Levites became a priestly caste following their zeal for the Lord at Sinai in the punishment of 3,000 idolatrous Israelites. Rather than being given lands, the Levites governed a series of Levitical cities. As for Joseph, his descendants were given a double share in that his two sons Manasseh and Ephraim were adopted as sons in their own right by Israel and given extensive lands and prestige in the Promised Land (indeed, the northern half of the Promised Land would be known as "Israel" or "Ephraim" in later years). The capital of the northern kingdom of Israel? ...  Samaria. 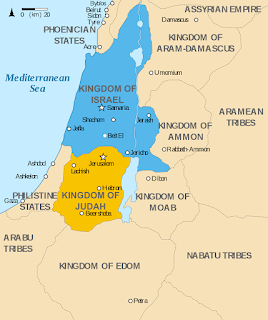 Around the year 732 BC, the northern ten tribes were taken into captivity by the Assyrians while the southern Kingdom of Judah was captured by the Babylonians in 586 BC. After the destruction of the Babylonian Empire by the Persians 539 BC, the people were allowed by Cyrus the Great  to return and rebuild the Temple and the walls of Jerusalem. The area was captured by Alexander the Great in 333 BC and remained under nominal Greek control until the Maccabean Revolt from 166-160 BC. During that time, the Maccabean family forged the Hasmonean dynasty and expanded the kingdom to include Edom - one of Israel's old enemies to its southeast. In 139 BC, the Roman Senate recognized Israel as a Jewish state but later forced it to become a Roman client state in 63 BC. In 37 BC, the Romans overthrew the Hasmonean dynasty and replaced it with the more pro-Roman Herodian dynasty and its founder Herod the Great of Edomite lineage. 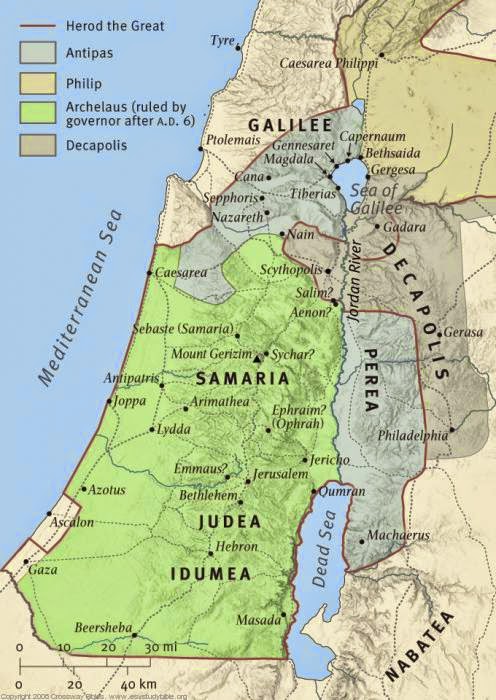 Upon the death of Herod the Great in 7 or 8 AD (click here to read Dr. Taylor Marshall's excellent work on dating Christ's birth and Herod's death), the kingdom was divided among his sons Archelaus, Antipas, and Phillip (see map at right). Rome soon decided to unify Samaria (which included much of the old northern kingdom), Judea, and Idumea (Edom) into one province called Iudaea. The capital of this province, however, would not be Jerusalem but Caesarea on the Mediterranean coast. Part of this administrative change was Roman rule over the province through its governors or procurators, the fifth of which being Pontius Pilate from 26-36 AD. Not included in this new province was the region of Galilee - an area vastly different from its southern neighbor. Perea, where John the Baptist preached and baptized, and Galilee remained under the rule of Herod Antipas (who beheaded John the Baptist and partook in the trial of Jesus because most of Jesus' ministry occurred within his realm).

The majority of Jesus' public ministry took place in Galilee. Seven centuries after the dispersal of the northern tribes, the Galileans were mostly non-Jewish, though some towns (Nazareth and Capernaum) and all of the "men of Galilee" who were Christ's apostles were Jewish. Only Judas Iscariot of the apostles and Jesus himself were from Judea. To the south and west of Galilee were Samaria and Judea, both places where Jesus spent a great deal of time (He was born in Judea's Bethlehem, 5.5 miles south of Jerusalem). To its southeast was the Decapolis - an area of ten cities deeply influenced by Greco-Roman culture and majority Gentile in population. It was in the Decapolis that Jesus exorcised a possessed man in Mark 5, and from this man that word spread throughout the Decapolis about Christ. In Tyre to the northwest, Jesus worked another exorcism among a heavily Gentile population. Jesus also traveled into the far northeast. It is here that we find Caesarea Philippi, the site where Jesus changed Simon's name to Peter, made him the rock upon which the Church would be built, and gave him the keys to the Kingdom.
Posted by Andrew Lynch at 6:00 AM