Catholic Sociobiology: 'Being as Communion' and John Zizioulas


When the first-ever papal encyclical on Ecology was presented in June 2015, the unconventional subject matter chosen by Pope Francis was introduced at the opening press conference by the preeminent Orthodox theologian John Zizioulas. When the Eastern Bishop gave his packed-house introduction, there was nary a word about global warming but a reflection on the spiritual and Eucharistic dimension of man, nature, and God. He emphasized the priestly role that man plays in a proper ordering of matter in time and space. This dimension was missed by secularists and conservative Catholics alike. But Rev. Zizioulas sees relations that others miss, and he applauded the prayer of Francis the saint and the initiative of Francis the pope. 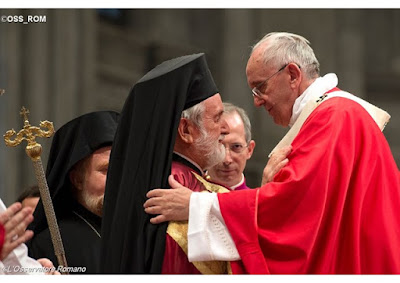 The contribution of Bishop Zizioulas to Catholic Sociobiology is fundamental. He has had an uncanny ability to present the Trinity, the person, and the Eucharist as interlocking truths which never lets one think of them in isolation again. He did the same thing with the Eucharist, the Bishop and the Church in his 1965 thesis (later published as a book). As he was finishing his thesis, the bishops of the Catholic Church were completing the Second Vatican Council which was a significant meditation on a more liturgical definition of the Church and Eucharistic understanding of the bishop in the local Church. Many Catholics who had been shaped by the Vatican II formulations were driven into even more profound reflection by the searing light that came from the Eastern bishop. A strikingly similar intellectual synergy occurred as the Polish philosopher Pope John Paul II emphasized Christian personalism as uniquely necessary for modern man emerging from the twin totalitarian ideologies of race and class. Just as that radical Christian personalism was being exploited by the individualization of libertine atheism, Zizioulous gave a renewed emphasis to relation as the heart of personhood. He showed how the Greek development of personhood came from the theological grappling with the Trinitarian nature of God. How best to describe what was being experienced and revealed – Father, Son, and Holy Spirit. Person as mask gave way to person as relational. Person was further marked by an interiority directed to some Other. By studying God and Christ, man found out who man was. Pope John Paul had promised just that.

Some younger readers are not as struck by Zizioulas as we were thirty years ago because so many of his insights are now so deeply incorporated in our theological grammar. Because of the good metropolitan I know:

a) I will never look at a bishop as an administrator again.

b) When we say that man is made in the image of God that means we are many persons in the One Body of Christ, as there are three Persons in the one God.

d) To say the local Church is Catholic is not just to say it is linked in space and time to the universal Church in the world through the ages. The Greek expression Katolik implies that "the whole is contained in this part." There is something about retaining the fullness of Christ and his Church in the locality without devolving into congregationalism. It is the Bishop who safeguards this essential ingredient of Catholic ecclesiology.

"The question that preoccupied the Fathers was not to know if God existed or not - the existence of God was a "given" for nearly all men of this period, Christians or pagans. The question which tormented entire generations was rather: *how* he existed. And such a question had direct consequences as much for the Church as for man, since both were considered as 'images of God'."
― John D. Zizioulas, Being as Communion: Studies in Personhood and the Church


"The person is otherness in communion and communion in otherness. The person is an identity that emerges through relationship; it is an 'I' that can exist only as long as it relates to a 'thou' which affirms its existence and its otherness. If we isolate the 'I' from the 'thou' we lose not only its otherness, but also its very being; it simply cannot be without the other."

"The fall consists in a refusal to make being dependent on communion in a rupture between truth and communion. In a fallen state communion is no longer constitutive of being. Death is not a punishment for an act of disobedience as much as an effect of individualization."


Paraphrasing:
To be interiorly oriented to the Other is not an act of the will—it is an ontological characteristic of the being.

To be aware of being but not communion is the fallen state -- it is individuation. It is the modern existentialist with his understandable preoccupation with suicide. The individual has life but not the true life which is unending. The fallen state is a status -- a state of sin -- a social position separated from the Trinity who made us for communion. The sacraments beginning with baptism and culminating in the Eucharist draw us back into the joy of personhood and communion. They change our status-- we have been drawn into the "state of grace."

Baptism is then an ecclesial act which draws the individual into communion. Confronted with the reality of the Trinity true personhood is possible as one is interiorly awakened to the Divine Other. We begin to be neurobiologically wired into the organism (the Body of Christ) that the human person as a species is meant to participate in. Christ made himself visibly present in one place in one era to one set of witnesses. He makes himself present through the ages. Once again he is here in a physical, limited way -- the sacramental Church. The Spirit works to draw all toward this common breathing living organism. 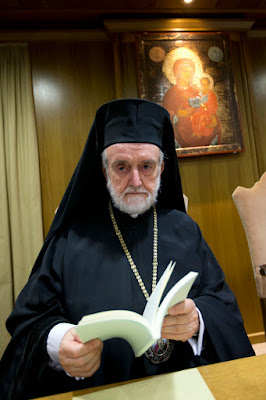 John Zizioulas was born in 1931; and is the Eastern Orthodox Titular Metropolitan of Pergamon (in modern Turkey) and chairman of the Academy of Athens.