"Realists" in American foreign policy schools often argue a war is inevitable with a "rising China." To prepare for that occurrence, they advocate organizing ever larger trade and balancing military coalitions with China's regional neighbors. This is often called The Thucydides Trap after the Greek historian’s depiction of the impending press for war between an established power (Sparta) and a rising power (Athens).

Henry Kissinger ended his On China book by recalling a similar historical analogy. The Crowe memorandum was written in 1907 by a British foreign official stating that with the unification of Germany (1870), the new nation’s ability to launch a formidable navy was in itself an objective threat "incompatible with the existence of the British Empire." Sir Eyre Crowe said there was no idiomatic strategy which could arrest the inevitability of a war that must be prepared for and won. There is a significant body of American foreign policy thinkers and future aspirants for the presidency who would frame the relationship of established global power America to the rising "hegemony" of China in just those terms. John Mearsheimer, the "dean of US international relations" from the University of Chicago, makes the case for  offensive realism toward the Chinese. His message is that China's rising economic power will be translated into military power, and this will be a threat to America that should be resisted.

Henry Kissinger takes a very different approach in his indispensable book. While his overview ends with the analogy of Crowe's British Empire and a rising Germany, he begins with a contrast of the American strategic game of chess and the Chinese game of wei qi. The American game of strategy is built on attack and possession of central targets, while the Chinese contest is the placement of many pieces encircling opponents on multiple fronts to gain strategic advantage. He reminds us, "China’s greatest fear is that an outside power or powers will establish military deployments around China’s periphery capable of encroachments on China’s territory or its domestic institutions." When it has deemed that it is faced with such threat, rather than risk the outcome of what it saw as gathering trends, China has gone to war -- in Korea in 1950, against India in 1962, along the northern border with the Soviet Union in 1969, and against Vietnam in 1972. It is hard not to think of wei qi when one looks at a map of China and US military bases in Asia. Mr Kissinger advocates understanding that great civilization as she understands herself. He would build peace with China through diplomacy. 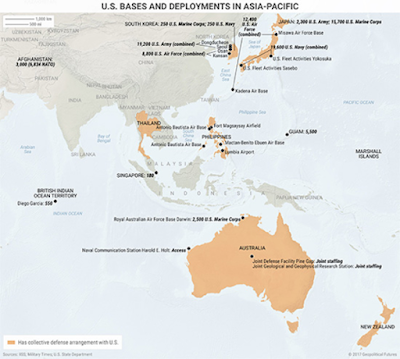 One vision that Kissinger describes of China is Colonel Liu Mingfu’s 2010 China Dream. Liu sees an Asian century led by China becoming "number one in the world" by displacing the United States. This will happen because China’s leadership will be wiser and more temperate than the U.S. China will eschew hegemony and act as primus inter pares of the nations of the world. Liu remembers fondly the tradition of Chinese emperors acting as the elder brother to kings of smaller, weaker countries. The incredible array of Chinese infrastructure projects around the world compare favorably to the US arms industry and militarized diplomacy of the post-cold war era. Liu, however, says this policy will only be possible by building a strong national martial spirit to deter or defeat the practitioners of amoral great power politics.

Behind every "China Dream" is an acute sense of the 19th century history of free trade (in opium) enforced by multiple western nations in the era of "unequal treaties." This era of western and then Japanese exploitation and conquest after centuries of world dominion as the Middle Kingdom has never been adequately avenged in terms of restored honor. This can only be done if China as a national organism is allowed to develop according to its own nature. This must be respected both in national diplomacy and in the presentation of Christianity (see Finding the Elder Brother in China). Besides the fear of encirclement that On China highlights, there is also embedded in the Chinese memory a fear of foreign religions introducing competing loyalty patterns against the nation. The Taiping Rebellion (1851-1864) was a Sino-Confucian-Christian hybrid that almost served as the Han Chinese formulation to overthrow the Manchu-dominated Qing dynasty. Maintaining social order is not a rationalization for tyrants in China. Eras of disorder cause millions of deaths. There was probably no civil war in human history as bloody as the Taiping movement. 20 million dead is the most conservative estimate of its death toll. When a ruling group loses the Mandate of Heaven there certainly is a tradition of violent upheaval by a group ready to establish a higher order of harmony. Expressive individualism, however, is not the highest good in China -- it doesn’t even make the list. It is entirely possible that a reformed Communist party could be the ruling vehicle of a Dream not at all Marxist but very Chinese. The disaster of the Cultural Revolution still resonates enough that Chinese leaders will try in the Deng Xiaoping (see book review) tradition to use the governing structures at hand. They will not worry "if the cat is white or black as long as it catches the mice."

A very different approach to the future of China comes from Niall Ferguson, the Scottish historian. He explains the "killer apps" that defined the West and argues the rising eastern nations apply "the killer apps" like the work ethic, trade, and consumer society much more effectively than the declining cultures of the West. Mr. Ferguson sounds his own kind of alarm that the next century will be marked by a reawakening of China and the Asian nations. Ferguson is tone deaf to the religious and  spiritual basis of civilizations but he is enough of a historian to describe some realities very well.

The United States may decide to defend a position of global dominance in the name of realism and the "get tough" presidential campaigns of little men or ambitious women. If these forces prevail then we will militarily contest the nation meant to be the central regional power in Asia as surely as we will fight Iran in the Mideast and Russia in Eurasia. Once again our adolescent leaders forget our shared history as allies and the disproportionate losses of the Chinese in WWII. (Review of Forgotten Ally). After WWII the US developed a worldwide system of military bases; and, yet, we join the Swedish internationalists in begrudging our old fighting allies the development of military installations in uninhabited islands off their own shores. We would argue that developing a diplomacy fostering a concert of powers respecting regional realities is a better road to brotherhood than encirclements.

To close this reflection, let us listen to an elder brother. Even years after his death, one can find no better insights about leaders and strategic realities than listening to Singapore’s founding father Lee Kwan Yew (1923-2015). These are selections on China from a book that transcribed his last speeches and then categorized his thoughts on history and international relations.


ON CHINA IN ASIA

"Of course they plan on being the number one power in Asia. Why not? They have transformed a poor society into an economic miracle. Theirs is a culture of 4000 years with 1.3 billion people, many of great talent -- a huge and very talented pool to draw from. How could they not aspire to be number one in Asia and in time, the world? ... The Chinese people have raised their expectations and aspirations. Every Chinese wants a a strong and rich China. This reawakened sense of destiny is an overpowering force. Unlike other emergent countries China wants to be China and accepted as such, not an honorary member of the West. At the core of their mindset is the world before colonization... China means 'Middle Kingdom,' recalling a world where they were dominant and related to other states as supplicants and vassals."

"He is in my lifetime, the most impressive man I have ever met."

"China is following an approach consistent with the ideas of the Chinese television series, 'The Rise of Great Powers,' produced by the the Party to shape discussion among the elites. The mistake of Germany and Japan was their effort to challenge the existing order. The Chinese are not stupid; they have avoided this mistake. Overall GDP, not GDP per person, is what matters in terms of power. The Chinese have calculated they need 30, 40, maybe 50 years of peace and quiet to catch up and change the Communist system to the market system. They must avoid the mistakes of Germany and Japan. Their competition for power, influence, and resources led in the last century to two terrible wars. The Russian mistake was to put too much into military expenditure and so little into civilian technology. So, their economy collapsed. The Chinese leadership has learnt that if you compete with American armaments, you will lose. You will bankrupt yourself. So avoid it, keep your head down and smile... for 40 or 50 years."

"He has had a tougher life than Hu Jintao (Chinese leader 2002-2012). He is reserved, not in the sense that he won't talk with you but in the sense that he will not betray his likes and dislikes. He has iron in his soul... I would put him in the Nelson Mandela class of persons -- a person with enormous emotional stability who does not allow his personal misfortunes or sufferings to affect his judgment. In other words he is impressive."

ADDENDUM JANUARY 2019
Why the US and China should not go to War.
by Kishore Mahbubani