CATHOLIC SOCIOBIOLOGY: Three popes on marital love, face-to-face eros, and the nature of the divine


Catholic Sociobiology is an explanation of the human species in terms of the Trinitarian God. We are made in the image and likeness of God – who is a Trinitarian communio of persons. Fatherhood, sonship, brotherhood, marriage, motherhood, and virginity are all manifestations of how ordered sexuality and sacral love are linked. Here are three popes reflecting on one of those forms of communio: spousal love.

God created man in His own image and likeness: calling him to existence through love, He called him at the same time for love.
God is love and in Himself He lives a mystery of personal loving communion. Creating the human race in His own image and continually keeping it in being, God inscribed in the humanity of man and woman the vocation, and thus the capacity and responsibility, of love and communion. Love is therefore the fundamental and innate vocation of every human being.
As an incarnate spirit, that is a soul which expresses itself in a body and a body informed by an immortal spirit, man is called to love in his unified totality. Love includes the human body, and the body is made a sharer in spiritual love.


The Greeks—not unlike other cultures—considered eros principally as a kind of intoxication, the overpowering of reason by a “divine madness” which tears man away from his finite existence and enables him, in the very process of being overwhelmed by divine power, to experience supreme happiness. All other powers in heaven and on earth thus appear secondary: “Omnia vincit amor” says Virgil in the Bucolics—love conquers all—and he adds: “et nos cedamus amori”—let us, too, yield to love. In the religions, this attitude found expression in fertility cults, part of which was the “sacred” prostitution which flourished in many temples. Eros was thus celebrated as divine power, as fellowship with the Divine.

The Old Testament firmly opposed this form of religion, which represents a powerful temptation against monotheistic faith, combating it as a perversion of religiosity. But it in no way rejected eros as such; rather, it declared war on a warped and destructive form of it, because this counterfeit divinization of eros actually strips it of its dignity and dehumanizes it. Indeed, the prostitutes in the temple, who had to bestow this divine intoxication, were not treated as human beings and persons, but simply used as a means of arousing “divine madness”: far from being goddesses, they were human persons being exploited. An intoxicated and undisciplined eros, then, is not an ascent in “ecstasy” towards the Divine, but a fall, a degradation of man. Evidently, eros needs to be disciplined and purified if it is to provide not just fleeting pleasure, but a certain foretaste of the pinnacle of our existence, of that beatitude for which our whole being yearns.
5. Two things emerge clearly from this rapid overview of the concept of eros past and present. First, there is a certain relationship between love and the Divine: love promises infinity, eternity—a reality far greater and totally other than our everyday existence. Yet we have also seen that the way to attain this goal is not simply by submitting to instinct. Purification and growth in maturity are called for; and these also pass through the path of renunciation. Far from rejecting or “poisoning” eros, they heal it and restore its true grandeur.

This is due first and foremost to the fact that man is a being made up of body and soul. Man is truly himself when his body and soul are intimately united; the challenge of eros can be said to be truly overcome when this unification is achieved. Should he aspire to be pure spirit and to reject the flesh as pertaining to his animal nature alone, then spirit and body would both lose their dignity. On the other hand, should he deny the spirit and consider matter, the body, as the only reality, he would likewise lose his greatness. The epicure Gassendi used to offer Descartes the humorous greeting: “O Soul!” And Descartes would reply: "O Flesh!" Yet it is neither the spirit alone nor the body alone that loves: it is man, the person, a unified creature composed of body and soul, who loves. Only when both dimensions are truly united, does man attain his full stature. Only thus is love —eros—able to mature and attain its authentic grandeur.

Nowadays Christianity of the past is often criticized as having been opposed to the body; and it is quite true that tendencies of this sort have always existed. Yet the contemporary way of exalting the body is deceptive. Eros, reduced to pure "sex," has become a commodity, a mere “thing” to be bought and sold, or rather, man himself becomes a commodity. This is hardly man’s great “yes” to the body. On the contrary, he now considers his body and his sexuality as the purely material part of himself, to be used and exploited at will. Nor does he see it as an arena for the exercise of his freedom, but as a mere object that he attempts, as he pleases, to make both enjoyable and harmless. Here we are actually dealing with a debasement of the human body: no longer is it integrated into our overall existential freedom; no longer is it a vital expression of our whole being, but it is more or less relegated to the purely biological sphere. The apparent exaltation of the body can quickly turn into a hatred of bodiliness. Christian faith, on the other hand, has always considered man a unity in duality, a reality in which spirit and matter compenetrate, and in which each is brought to a new nobility. True, eros tends to rise “in ecstasy” towards the Divine, to lead us beyond ourselves; yet for this very reason it calls for a path of ascent, renunciation, purification and healing.

More:
The Prophets, particularly Hosea and Ezekiel, described God’s passion for his people using boldly erotic images. God’s relationship with Israel is described using the metaphors of betrothal and marriage; idolatry is thus adultery and prostitution. Here we find a specific reference—as we have seen—to the fertility cults and their abuse of eros, but also a description of the relationship of fidelity between Israel and her God. The history of the love-relationship between God and Israel consists, at the deepest level, in the fact that he gives her the Torah, thereby opening Israel’s eyes to man’s true nature and showing her the path leading to true humanism. It consists in the fact that man, through a life of fidelity to the one God, comes to experience himself as loved by God, and discovers joy in truth and in righteousness—a joy in God which becomes his essential happiness: “Whom do I have in heaven but you? And there is nothing upon earth that I desire besides you … for me it is good to be near God” (Ps 73 [72]:25, 28).


Let us cross the threshold of this tranquil home, with its family sitting around the festive table. At the centre we see the father and mother, a couple with their personal story of love. They embody the primordial divine plan clearly spoken of by Christ himself: “Have you not read that he who made them from the beginning made them male and female?” (Mt 19:4). We hear an echo of the command found in the Book of Genesis: “Therefore a man shall leave his father and mother and cleave to his wife, and they shall be- come one flesh (Gen 2:24)."

10. The majestic early chapters of Genesis present the human couple in its deepest reality. Those first pages of the Bible make a number of very clear statements. The first, which Jesus paraphrases, says that “God created man in his own image, in the image of God he created them; male and female he created them” (1:27). It is striking that the "image of God" here refers to the couple, "male and female..."

11. The couple that loves and begets life is a true, living icon – not an idol like those of stone or gold prohibited by the Decalogue – capable of revealing God the Creator and Savior. For this reason, fruitful love becomes a symbol of God’s inner life (cf. Gen 1:28; 9:7; 17:2-5, 16; 28:3; 35:11; 48:3-4). Seen this way, the couple’s fruitful relationship becomes an image for understanding and describing the mystery of God himself, for in the Christian vision of the Trinity, God is contemplated as Father, Son and Spirit of love. The Triune God is a communion of love, and the fam- ily is its living reflection.

12. In speaking of marriage, Jesus refers us to yet another page of Genesis, which, in its second chapter, paints a splendid and detailed portrait of the couple. First, we see the man, who anxiously seeks “a helper fit  for him” (vv. 18, 20), capable of alleviating the solitude which he feels amid the animals and the world around him. The original Hebrew suggests a direct encounter, face to face, eye to eye, in a kind of silent dialogue, for where love is concerned, silence is always more eloquent than words. It is an encounter with a face, a “thou”, who reflects God’s own love and is man’s “best possession, a helper  fit for him and a pillar of support”, in the words of the biblical sage (Sir 36:24). Or again, as the woman of the Song of Solomon will sing in a magnificent profession of love and mutual self-bestowal: “My beloved is mine and I am his... I am my beloved’s and my beloved is mine” (2:16; 6:3).
The result of this union is that the two “become one flesh”, both physically and in the union of their hearts and lives, and, eventually, in a child, who will share not only genetically but also spiritually in the "flesh" of both parents.
Your children are as the shoots of an olive tree.

14. Let us once more take up the song of the Psalmist. In the home where husband and wife are seated at table, children appear at their side “like olive shoots” (Ps 128:3), that is, full of energy and vitality. If the parents are in some sense the foundations of the home, the children are like the “living stones” of the family (cf. 1 Pet 2:5 ) 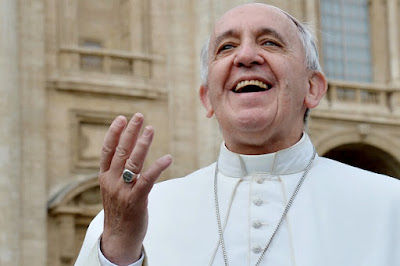 UPDATE: Rod Dreher at American Conservative chose these first two selections to show that Francis isn’t the first pope to talk about love and sex in a positive way.