THE WEEKLY BRIEF
ONE YEAR AFTER MCCARRICK

What began with the Pennsylvania grand jury report exploded into a widening investigation of cover up on the part of other attorney generals across the nation. While more reports are forthcoming, we remember the news a year ago that "Teddy" McCarrick was credibly accused of sexual abuse. In response, Pope Francis did what the popes before him would not do - remove him from the College of Cardinals and defrock him. As McCarrick story broke, we at AoA were heartened to hear about the excellent investigative work being undertaken by Church Militant and others regarding cover ups at the episcopal level. Then Vigano - who was under investigation in covering up for Archbishop Neinstedt - threw us all off.

When Vigano's letter began to circulate it broke the floodgates on criticism of Pope Francis. Never mind the fact that Pope Francis defrocked McCarrick, or that Popes John Paul II and Benedict XVI were responsible for never removing McCarrick in the first place. Outlets like Church Militant, which had stated until that point that it would not attack the Holy Father, openly joined the ranks of the radical traditionalists in denouncing Pope Francis and calling for his resignation. The excellent reporting on corruption within the ranks of the episcopate was replaced by reports calling for Catholics to oppose Pope Francis. Vigano threw us all off.

Yet on the one year anniversary of the McCarrick story breaking, Church Militant reported that it has received leaked files from with the Chicago chancery regarding the late Cardinal Bernadine. Bernadine was a notorious support of homosexuality who dominated the post-Vatican II American church. It was Bernadine who illicitly began the practice of Communion in the hand in the US. According to the leaked documents, as a priest Bernadine raped an eleven year old girl with his bishop as part of a Eucharist-desecrating Satanic sex cult. James Grein, whose testimony helped bring down McCarrick, tells Church Militant that McCarrick and Bernadine sexually assaulted him. More reporting from Church Militant here and here. We hope this summer's reporting can get back on track and continue this kind of reporting - and we hope Vigano and others like him refrain from throwing us all off once again.

PAN-AMAZON SYNOD - WORKING DOCUMENT: An English translation has been released for the working document for the upcoming Pan-Amazon bishop's synod. As was the case with the hysteria over the working document for the synod on the family, we may see a similar outcome: a poor working document that ultimately did not reflect the final decisions reached by the synod or taught by Pope Francis. To prepare yourself for the coming synod and hysteria we're already seeing in from Conservative Catholic, we highly encourage the reader to re-read Dr. Pence's reflection The Sacred and the Taboo: A Lesson from the Synod along with the opening review of family synod in the Religion & Geopolitics Review from December 26. 2015.

BISHOP SHEEN RETURNS: Having lost in the courts the body of titular Archbishop Fulton Sheen was unceremoniously given up by the Archdiocese of New York. Cardinal Dolan was absent as Sheen's body was disinterred at the five AM, and he ordered limitation on media coverage. Sheen's remains arrived in his home diocese of Peoria, Illinois on the feast of Our Lady of Perpetual help - where it has been laid to rest at an altar imploring her patronage. With is remains in Peoria, the diocese at work in his canonization, the canonical process can resume.

DEMOCRATS DEBATE: The Democrats took two nights to kick-off the 2020 primary season with back-to-back debates. During these debates, Biden's performance was dismal, Bernie's announced he'd raise taxes on the middle class, Castro defended abortion rights for trans-females - in other words, men - O'Rourke awkwardly opened by speaking in Spanish while Inslee and Harris both declared the sitting president the country's greatest national security threat. Gabbard by far did best, but her time was limited and she's found herself under attack for not being hawkish enough. At this point, Trump's re-election is looking good.

FUNDING TRUMP: The RNC announced the president recently raised over one million dollars an hour for nearly $25 million dollars in one day of fundraising with an average donation of $44. Several of his Democrat challengers announced funding to the tune of $6 million. The money game is important, but the president appears to be off to a good start. Here is a chart showing the first quarter funding reports from all candidates.

LEAKED PLANS? President Trump had announced plans to begin deporting immigrants who had disobeyed court orders but delayed the plan as it was about to begin. Did the acting head of DHS leak the plans and make the untenable? The recent problem of leaking may stem from changes made in the waning days of the Obama administration. Until he left office, raw intelligence was shared only between three intelligence agencies, but as Obama left office he signed executive order 12333, allowing raw intelligence now to be shared between 17 agencies. The widened access meant that it would be harder to find leakers - a problem the President has faced time and time again.

BUCHANAN ON LOOMING WAR WITH IRAN: While Buchanan applauds Trump's decision to pull back from a terrible plan to attack Iran, he rightly criticizes the President for bringing us to the current situation: "Visualizing 150 Iranian dead from a missile strike that he had ordered, President Donald Trump recoiled and canceled the strike, a brave decision and defining moment for his presidency... Still, it needs to be said: The president himself authorized the steps that have brought us to this peril point. Trump pulled out of and trashed Obama’s nuclear deal. He imposed the sanctions that are now inflicting something close to unacceptable if not intolerable pain on Iran. He had the Islamic Revolutionary Guard declared a terrorist organization. He sent the Abraham Lincoln carrier task force and B-52s to the Gulf region.... We appear to be at a turning point in the Trump presidency. Does he want to run in 2020 as the president who led us into war with Iran, or as the anti-interventionist president who began to bring U.S. troops home from that region that has produced so many wars?

PETER ZEIHAN: Peter Zeihan once worked for Stratfor and is a specialist in the impact of markets on geopolitics. This video from November 2018 gives his current outlook on the world and ends with a reflection on American politics. We don't agree with all of his assessments, but the talk is worth listening to in full. He sees a re-alignment in the US political parties with Trump forming a new coalition among ethnic minorities, religious believers, and unions while Democrats become the party of the widely divergent forces of the Sexual Left and big business (see below). 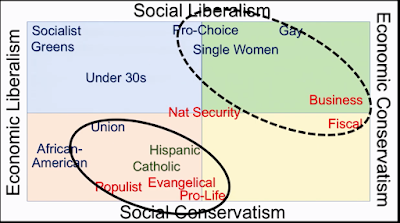 WAR GAMING IRAN, CHINA, RUSSIA: War games allow a military to test current doctrine against potential adversaries in coming wars. They also allows military commanders to put themselves in the shoes of the enemy, attempting to do their best with the forces at the adversary's disposal. A $250 million war game, called Millennium Challenge 2002, game tested a war between the US and Iran. The Iranian player, Marine Corps Lieutenant General Paul K. Van Riper, adopted asymmetric tactics that led to the - thankfully simulated - sinking of sixteen warships, including a US aircraft carrier, and 20,000 dead sailors. Iran was only defeated by resetting the game and restricting Gen. Riper so badly that he could not win. In a more recent game simulating war with Iran in 2020, America fared little better. More recent war games simulating conflicts with Russia and China reveal the US losing its aircraft on the ground, naval destruction due to overwhelming missile strikes, and the crumbling of command-and-control systems.

KHASHOGGI AND THE SAUDIS: The US Senate rejected an arms deal between the US and Saudi Arabia - an act soon to be vetoed by President Trump. The rejection comes not so much due to Saudis ties to terrorism nor to its war in Yemen, but for the vicious killing of dissenter Jamal Khashoggi. We hope Senate has a real debate over Saudi Arabia's history of Wahhabism rather than bemoan its positions on feminism. homosexuality, and individual liberty.

IRAN AND TERROR: If the joke that the Iran is the world's leading sponsor of terrorism wasn't enough, Pompeo and the "intelligence community" are telling Congress that Iran is linked the anti-Shia Wahhabi terror organization Al Qaeda. What's more, reports are also being floated that Iran is establishing terror cells in the Sunni-dominated Islamic Africa. These inconceivable reports show how easy it is to manipulate Congressmen - and the general public - when they do not understand the basics of Sunni-Shia-Wahhabi divisions within the Islamic world.

FATHERLESSNESS: Suzanne Venker examines the marginalization of men and the crisis of fatherhood. She notes the troubling pattern: men are getting displaced from the workplace, become unemployed and passed over by women for marriage - yet women will still have children with them and raise their children as single mothers. Their sons in turn grow up to imitate their absent fathers and the girls grow up raised to be single moms. In the long run it is a pattern that cannot sustain itself.

GENDER CHANGE LITURGY: Continuing their plunge off the deep end, the Church of England is writing guidelines for liturgies to celebrate the completion of gender transitioning. This is the same church that removed reference to the Devil from its baptismal rites.

BURNING THE FLAG: No, not the American flag, the "Pride" flag. According the Sexual Left, it's free speech to burn former but a hate crime to burn the latter. High school boys in Utah are, for example, finding themselves in hot water for burning the rainbow flag. A recent burning of a rainbow flag in Saskatchewan has been denounced for fear it will lead students to feel unsafe in school. And after what appears to be a black man burning rainbow flags outside of a gay bar in Harlem, the New York Police Department's Hate Crimes Task Force has been called in to investigate. It is high time to see we are protecting the wrong flag.
Posted by Andrew Lynch at 3:00 AM