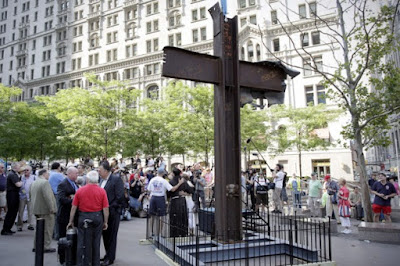 It has been 20 years since 3,000 Americans died in the attacks of the World Trade Center in New York and the Pentagon in Washington D.C. The New York firefighters and the passenger citizens who prevented the hijacker goals on Flight 93 remind us that a fighting citizenry and local police and firemen are always the primary defense in this asymmetric form of war. The natural response to an attack is for a people to assemble in natural protective relations to safeguard the group. This religious war will be fought by a religious people organized as a nation of protectors in every city and state. A return to God as a people and a renewal of our American national identity are essential elements in our defense. Reversing the asexual modern socialization patterns of young males is just as necessary. Our civc/political failure to link male maturation and patriotic protective duty has spawned, some effeminate and others thuggish, hyper-individualized and ungrateful young males. The 9/11 attacks did bring an outpouring of gratitude and honor toward the soldier, policeman, and fireman -- the traditional male citizen protectors. Our young males need such clarity. Male maturation has nothing to do with color; it is about entering an adult male group united by religious and protective duty. Adolescents think they know it all but real men submit to spiritual authority. Boys are protected by women; grown up men protect women. To effectively protect, we must bond together as a fraternity of fathers. Reversing the cultural lessons of the sexual revolution by reasserting the spiritual meaning of manhood and national brotherhood is another essential response to 9/11.

From the beginning the US governmental response to the attack has misunderstood the religious animus that still motivates our enemies. This has led to strategic incoherence in picking our allies and isolating our enemies. The shock of 9/11 has misguided our tactics as well leading to a skewed emphasis on protecting airplane flights before securing our water supply and electrical grid. We have argued that we must understand the role of religion and nations in framing this conflict. We think there is much to be learned from both Barack Obama and his senior foreign policy advisor (scroll down for interview with Ben Rhodes within this link). They came to understand the failure of our own foreign policy establishment and the mistake in demonizing Shiite Iran when we are fighting a branch of Sunni Islam fostered by Saudi Arabia. This understanding has been deliberately obfuscated by Israeli and Saudi forces who wish to turn the war on terror into a war against Iran. A significant reinforcement  of their narrative is the US Marine memory of Oct 23, 1983. For many soldiers  the Iran/Syrian/ Hezbollah inspired bombing of Marine barracks in Beirut was the "real beginning of global Islamic terrorism." The event was part of the 1982 Lebanon, PLO, Israeli war in which US troops were inserted with no definitive military goals for the forces themselves. There is a great lesson to learn from our soldiers' deaths in Beirut. That lesson is not that Iran is the chief exporter of terrorism in the world.

The war in Afghanistan is a different theatre than the struggle in the Mideast. But like the fight against ISIS in the Mideast, we will need Iran and Russia as well as India and China in helping bring negotiated peace in Afghanistan. (Scroll to Islam and Mideast in this link for good review of Afghanistan conflict).

The war of the Saudis against the Houthi of Yemen has weakened our fight against AQAP in Yemen. This is directly analogous to our long involvement in aiding jihadist Sunnis against the Assad government in Syria. Our country is an ally in the religious persecution of Shiites which animates so much of Muhammed bin Salman's new more aggressive Saudi foreign policy. This aggression is part of the young Crown Prince's effort to win favor with the Wahhabi clergy in pressing his claims for succession to the throne against his more competent elder kinsmen. The Crown Prince is also the force behind the anti-Qatar campaign (scroll to new Crown Prince). The strategic goals of the US have been obfuscated by confusing them with the goals of our traditional allies. Pakistan in South Asia, as well as Saudi Arabia and Israel in the Mideast have different goals and different enemies than the U.S.

President Trump has advocated an 'America first' foreign policy. Now we need citizens, journalists, scholars -- but most of all the US Senate -- to debate fully what that means. We owe clarity of strategy to our dead, our military, and the young men we are socializing to continue the protection.   This must include trying to resolve the almost 40-year-old Iran/Israeli war which is being confused with the global war against salafist jihadists. (See this excellent summary of Israel's geopolitical stance in which ISIS as a buffer is preferred to a stabilization of Shia-led governments in Iran, Iraq or Syria.)

We now (2018) hear officials and some newsmen say that 9/11 was caused by "radical Islamic terrorism." That is true and that is an advance but that is not enough. That brand of radical Islam which attacked us had a launching pad in Afghanistan but they had a home base as well. The Islamic radical movement which struck us comes from a particular school of Islamic law. They have a territorial address. But after 7 years under President Bush, 8 years under President Obama, and 4 years under President Trump, we have not given them a proper call back yet. Let us remember, let us reconsider, let us redirect.

{Our extended 18,000 word essay published on Sept 11, 2018 places our arguments about 9/11 in the historical context of the 20th century. It is a long illustrated piece-our culminating synthesis.}
2021 Update: In the late hours of 9/11's 20th anniversary, the FBI released a heavily redacted report revealing more links between the 9/11 hijackers and Saudi Arabia. It is the first of several documents - all hidden by Robert Mueller - expected in the months ahead.
Posted by Andrew Lynch at 12:00 AM