September 14: The Triumph of the Cross

"Though He was in the form of God,

Jesus did not deem equality with God something to be grasped at.

Rather He emptied Himself and took the form of a slave being born in the likeness of men.

He humbled himself obediently accepting even death, death on a cross.

Because of this God highly exalted Him and bestowed on him the name above every other name.

So that at Jesus' name every knee shall bend in the heavens and on the earth and under the earth and every tongue proclaim to the glory of God the Father: JESUS CHRIST IS LORD!" 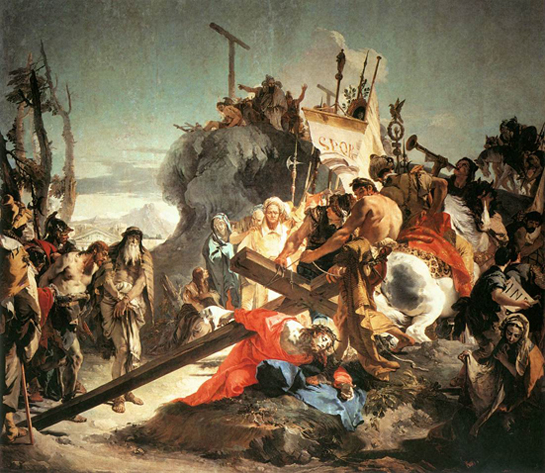 The Triumph of the Cross is the establishment of a new honor/shame code. The obedience of the Son -- filial piety -- conquered the disobedience of the Evil Angel and the first humans. Even more than the sacrificial love that Jesus shows for all of us in His death, it is His obedient love for His Father that is the driving dynamic of this event. Jesus obeys His Father and allows Himself to be publicly humiliated, with His mother close by as a participant in His suffering. Jesus had asked that this cup pass Him, but He submitted to the will of the Father. Obedience to a sacral order, not equality of station, is the road to Victory. This does not abolish honor codes but elevates a new King and incorporates the angels and martyrs in a new court of reputation. This does not do away with shaming and expulsion but dethrones the Prince of this world and scoffs at the glitter and glamour of sin.

The Triumph of the Cross and the Kingdom of God is established by entering into the sacramental order that flows from the side of the Pierced One. That sacramental order reconstitutes the human species as the Body of Christ. The sacramental order is built on a sacral brotherhood that Christ established to maintain His Presence and His sacrifice to the Father on earth throughout time. Through Christ's Church we are incorporated in the interpersonal love of the Trinity. As brothers in Christ we go forth to baptize the nations to effect the Kingdom of God and Triumph of the Cross. The fraternity of priests sustain the Body of Christ in the Eucharistic forms of local Church and earthly Kingdom. The laymen shape civic territorial circles of patriarchal fraternity and order - -some explicitly Christian; others patterned after other transcendental truths. Creating these concentric circles of ordered fraternity bring men into the formations that protect the Eucharistic acts of worship while preparing humanity for the final Coming and Triumph of the Lord.