The Feast of the Epiphany and the true Age of Enlightenment 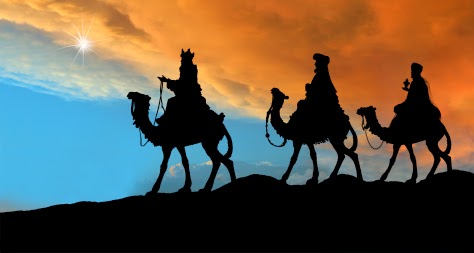 Epiphany means 'manifestation.' The Christmas season is a series of liturgical celebrations of different events in the life of Christ that manifest who He is, and why calendars all over the world begin their numbering of the years based on His coming. The naming of Jesus and his circumcision complete the Christmas Octave (Jan 1st); the twelve days of Christmas end with the “Christmas for the Gentiles” and the coming of the Magi (kings or wise men) on Jan 6th or the Sunday nearby. For centuries this day was associated with the coming of the Magi, the Baptism of Our Lord and his first miracle at the wedding feast in Cana. All of these were manifestations of the unique event that was celebrated at Christmas. The celebration of Epiphany ends with the manifestation of the Trinity revealed at Christ's baptism by John in the river Jordan. A few other traditions extend the season the full 40 days to his Presentation in the Temple as the first-born Jewish son on Candlemas Day (Feb 2nd).

At the feast of the Epiphany he does not transfigure himself, nor do we hear the voice of God or songs of angels. The scene at the epiphany is three kings representing the monarchs and nations of the world bowing to the King of Kings; and acknowledging that from this birth forth, the destiny of nations would be determined in relation to the new King. Not only human history but all of physical nature is reconfigured to the alpha male of humanity -- the Lord of nature and perfecting head of our species. The star pointing the wise men to his person shows that a new law of personal gravity is in effect that will allow Peter to walk on water, and the human species to escape the sure death awaiting any planet tied to the finite life cycle of a medium-size star. The Star of Bethlehem foreshadows the domination and reorganization of nature that the God of eternal life promises. On this 12th day of Christmas let us promise, with the wise men, that we will always teach the truth of nature and the physical sciences, as well as the meaning of history and the story of nations in light of God -- who made Himself fully known during the true age of Enlightenment: Our Lord’s earthly lifespan 2000 years ago--the axis mundi. 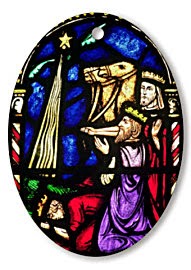 "The wise men, seeing him, so fair,
Bow low before him, and with prayer
Their treasured eastern gifts unfold
Of incense, myrrh, and royal gold.

The fragrant incense which they bring,
The gold, proclaim him God and King;
The bitter spicy dust of myrrh
Foreshadows his new sepulchre.

All glory, Lord, to thee we pay
For thine Epiphany today;
All glory, as is ever meet,
To Father and to Paraclete."

Addendum 2019-The three men in history and art by Sandra Meisel.