Connecting the dots from G Washington to BT Washington

Charles Murray has a fascinating comment on the Founding Fathers:


"The founders were unanimous in saying this Constitution will not work with just any kind of population. The population must possess certain virtues. This was not just one or two founders who said this. They all did. And they also focused on four that were crucial. All of them agreed. There were others that they had in the list. But these four were central: the integrity of marriage, industriousness, religiosity, and plain American honesty. And they said without those you cannot have a self-governing population."

Probably the most dangerous section of the Twin Cities in recent years is far north Minneapolis.  A cab driver was slain there a couple weeks ago; and on Monday evening at 8:30 a young man was bicycling some food to nearby friends of his parents, when he was confronted by three teenage boys who demanded his bike.  When he didn't stop, he was shot dead.

Booker T. Washington is being proven right.  You can have black mayors and black presidents, you can have Supreme Court decisions and civil rights laws -- but politics and courtrooms only take you so far!

How does a young black man fill up his days with accomplishment and honor and pride?


"The older I get, the more I appreciate Booker T. Washington’s educational philosophy of self-help and self-reliance for the masses of blacks... Washington wisely stressed the laudable virtues of personal responsibility, thrift, and hard work as the most effective means of achieving self-sufficiency and white acceptance by defying negative stereotypes.

"I admire Washington for many reasons that extend beyond the fact that he was a fellow Virginian born about 20 miles from the hamlet where I grew up in rural poverty. Although Washington was born a slave on a large plantation, he managed to get an education, and he founded an institution designed to uplift other former slaves and their offspring. Instead of lecturing white Americans about the litany of injustices perpetrated against blacks, Washington appealed to their better natures and gave them an opportunity to use their money to help him establish and maintain Tuskegee Institute in Alabama. Tuskegee taught black men and women mechanical skills and trades that would make them more valuable citizens... I have an abiding respect for Washington because he spoke for blacks from poor families like mine. W.E.B. Du Bois, his Harvard-educated counterpart, represented the needs and desires of a more elite constituency, as can be gleaned from his advocacy of a liberal arts education of what he referred to as the 'Talented Tenth' of the black race." 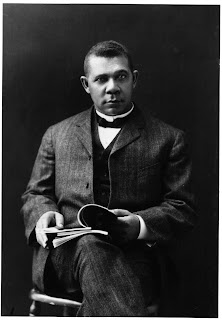