Radical idea: be the adult men in the room

Peggy Noonan’s comments on the men of the Secret Service:

Remember when Reagan was shot? That was Secret Service agent Tim McCarthy who stood there like a stone wall, and took one right in the gut. Jerry Parr pushed Reagan into the car, and Mr. Parr was one steely-eyed agent. Reagan coughed up a little blood, and Mr. Parr immediately saw its color was a little too dark. He barked the order to change direction and get to the hospital, not the White House, and saved Reagan's life. From Robert Caro's Passage of Power, on Secret Service agent Rufus Youngblood, Nov. 22, 1963: "there was a sharp, cracking sound," and Youngblood, "whirling in his seat," grabbed Vice President Lyndon Johnson and threw him to the floor of the car, "shielding his body with his own."

In any presidential party, the Secret Service guys are the ones who are mature, who you can count on, who'll keep their heads. They have judgment, they're by the book unless they have to rewrite it on a second's notice. And they wore suits, like adults. 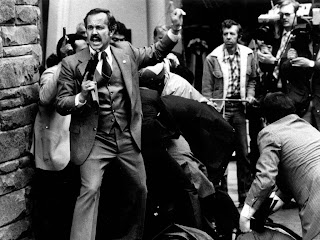 This week I saw a picture of agents in Colombia. They were in T-shirts, wrinkled khakis and sneakers. They looked like a bunch of mooks, like slobs, like children with muscles.

Special thanks to the person who invented casual Friday. Now it's casual everyday in America. But when you lower standards people don't decide to give you more, they give you less...