China forced to apologize for shameful treatment of mother

Violently subjecting a young mother -- seven months into her pregnancy -- to an abortion has brought condemnation on the Chinese government.  The article also gives some background on the role that recently exiled dissident Chen Guangcheng (pictured with his wife and son) has played in protesting the one-child policy with its train of abuses. 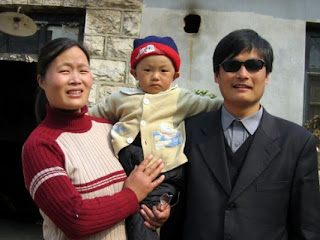 Some Democratic feminists in our country are ramping up their bizarre rhetoric, as they hope to incite a new pride in women who have aborted their children.

("In his Aug. 29, 1996, speech to the Democratic National Convention, President Bill Clinton said ‘abortion should not only be safe and legal, it should be rare. That's why I helped establish and support a national effort to reduce out-of-wedlock teen pregnancy, and that is why we must promote adoption.’ The convention attendees responded with enthusiastic applause.")