Map on Monday: The Spread of Islam to 750 AD 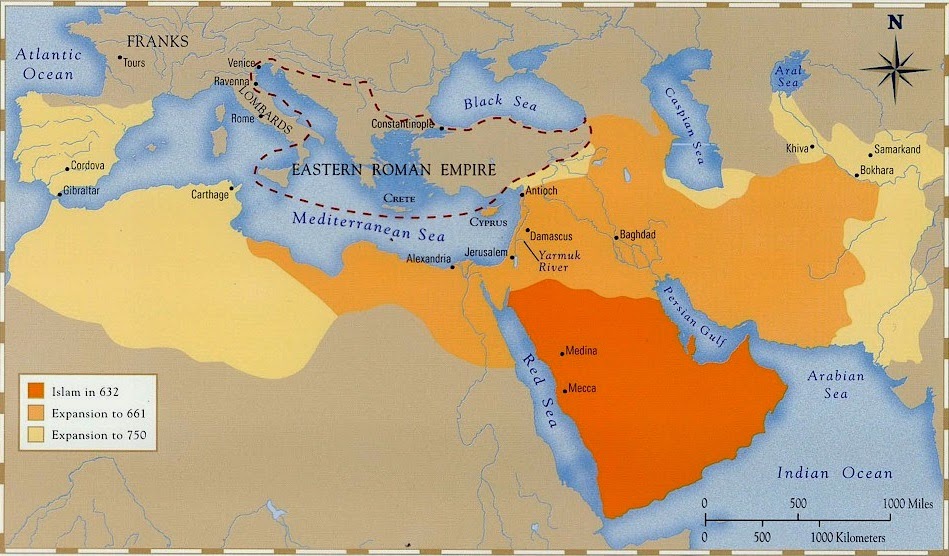 Between the death of Muhammed in 632 and the Battle of Tours in 732, Islam conquered ancient Persia, much of the Byzantine (eastern Roman) Empire, North Africa, Spain, and parts of what is today southern France. Within this area were the ancient Christian Patriarchates of Antioch, Alexandria, and the Holy City of Jerusalem itself. After the Islamic conquests, Christianity (a great eastern and African religion) became isolated to Europe and was seen by many historians and Christians as a "western" religion. Christianity would come to the Slavs during the 9th-13th centuries. The division between Orthodoxy and Catholicism would be exacerbated by the Mongol invasions, which began during the 1230's. (More on that map-changing world event at a later date.)

While Islam would continue to spread further eastward -- into what is today Afghanistan, Pakistan, India, Bangladesh, Indonesia, and even southern Philippines -- valiant Frankish and Visogothic Catholics halted the Islamic advance in western Europe, while Byzantine soldiers fought off an Islamic attack on Constantinople in 717 through use of Greek fire. Although Constantinople eventually fell to the Muslim Turks in 1453, the Catholic military Reconquista of present-day Spain and Portugal began around the year 800 and ended in 1492 -- just 39 years after the fall of Constantinople.

Islamic fleets and armies continued to be a danger in eastern Europe and were only limited by Catholic forces in the Battles of Lepanto (1571) and Vienna (1683). The religious soldiers of the Spanish empire and the missionaries they protected would bring Christianity in 1492 to the new world of the Americas.
Posted by Andrew Lynch at 6:00 AM