Between 1870 and 1940, Germans invaded France three times. Although these three clashes took place in modern times, feuding between the two nations may be traced back to the division of Charlemagne's empire at the Treaty of Verdun in 843. In the division, a strip of territory between what would one day become France and Germany became the area in which many of the battles below were fought. Indeed, the victors of the Franco-Prussian War (1870) and World War I (1914-1918) claimed lands in this very region. 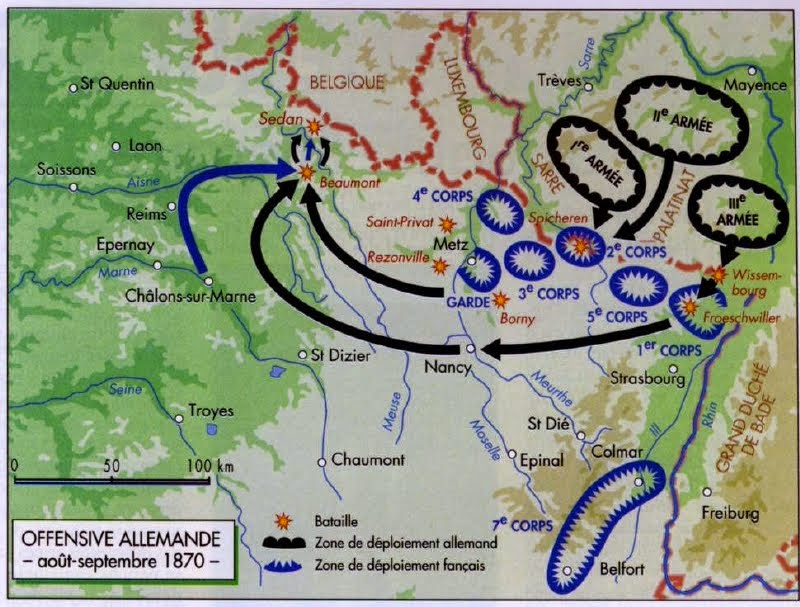 The map above (click to enlarge) depicts the Prussian (German) invasion of France by way of Alsace and Lorraine during the Franco-Prussian War of 1870. This war came as the third successive war in German unification (the first two were fought with Denmark to secure the German north, and with Austria-Hungary to secure the southeast). From these wars emerged the new German way of war - quick, deadly, and decisive. The rapid maneuvering of the Germans at the outset of the war with the French led quickly to the decisive Battle of Sedan on September 1, 1870. Entrapped by the Germans, the entire French army was forced to surrender along with their commander, Emperor Napoleon III (whose reign that day came to an unceremonious end). With the war's conclusion, Alsace and Lorraine changed hands to the Germans and the German wars of unification were complete. 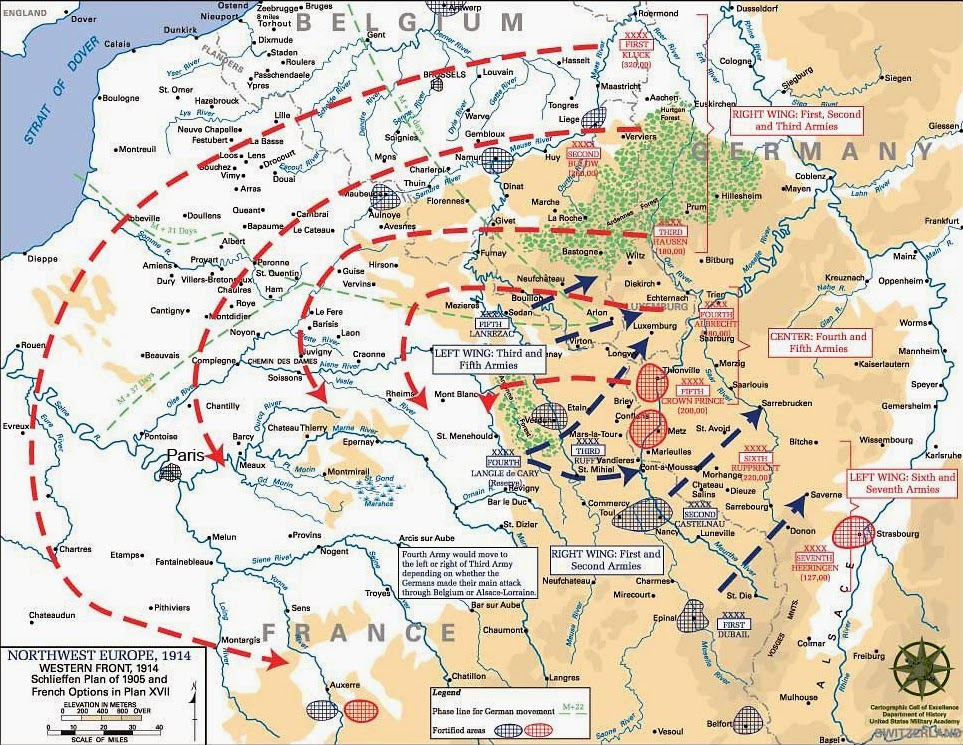 Germany sought another rapid war with the French in 1914. The map above (click to enlarge) is a map of the Schlieffen Plan - a plan originally drafted in 1905 but largely became the basis for the German strategy in the opening offensive against the French. The plan of attack was a large sweeping action with forces from the north wheeling around to capture Paris from behind. The large forces coming through neutral Belgium, however, brought the British into the war. As the opening German campaign sputtered to a halt, British reinforcements and freshly dug trenches defeated the German plans for a quick and decisive war. With the eventual defeat of Germany, Alsace and Lorraine changed hands once more and returned to the French (who then began building the famed Maginot Line of defenses against future German aggression).

With the rise of Hitler, a German war with France loomed on the horizon once more. The German army drafted two plans of attack (see above) and chose the plan most similar to the rapid offensive of 1870. The larger, mechanized armies of the 1940's led the German war planners to bypass assaulting the Maginot Line for a bold offensive through the lightly protected Ardennes forest, making a drive for the coast while Allied troops were drawn into combat in Belgium and surrounded. The brilliant plan was executed with perfection, and the Allied forces were cut to pieces and forced to withdraw by sea from Dunkirk. Nevertheless, the Germans captured 40,000 men along with 50,000 vehicles. Paris capitulated in under six short weeks of fighting - and the Maginot Line surrendered as part of the brief war's concluding armistice and the rise of Vichy France.
Posted by Andrew Lynch at 6:00 AM