Oliver O'Donovan: The Desire of the Nations


Oliver O'Donovan (b. 1945) is an Anglican theologian who has written this dense and seminal work on political theology. Here is a good introduction to the author and his other important works in Christian ethics. He argues that Christian political theology must always begin from the reality that God is King. He believes Christian political thinking has been swamped by modern thinking and thus he and his wife edited a spectacular resource book From Irenaeus to Grotius: A source book in Christian Political Thought (1999). There he makes clear that constitutionalism and multiple authorities in civic and religious life are not inventions of the Enlightenment but gifts from Christendom. The Desire of the Nations is very hard to read. Even reviews of the book are hard to read, but there are realities which O'Donovan articulates which are too essential to leave him to academics. Here is the best review. 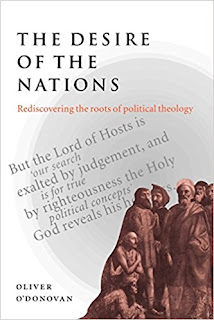 The template of political authority is God ruling Israel. They have a unique destiny as the elect but they are also the template of other nations. The rule of God over Israel culminates in the life, death, resurrection and rule of Christ. God acts in history to establish Israel. He judges them at different times separating righteous from unrighteous behavior and he maintains them as a continuous body acting in time. Power, Judgement, and Sustenance. These are the rudiments of God's rule over a nation. 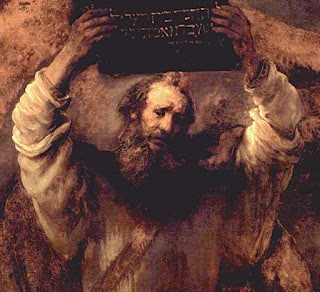 Christ too is a definitive act of authority by the Father. Christ too renders a  judgment on the world separating the living from death and sin on the cross. Christ sustains by ordering a Liturgical church that retains a continuous identity and memory of the Kingdom of God on earth. (The Church is a nation of priests.) God acts. God judges and saves. God sustains and remembers. He has done this through Israel. He has done this through  Christ and the Church. He is now doing this through the nations.

Christendom is an interaction of the priestly and kingly roles of the church and the nations. Christendom is not to be dismissed as a past era not to be lived again. There are two powers: the Church and the states. This we accept. But there is only one God and He is King of both domains. To say a state is secular is not to say it is godless. The opposite of "secular" is not the sacred. It is "the eternal".  Secular is an age- an era, a unit of time-an acceptance of contingency.  A secular state understands its limitation in time and a territorial state accepts its limitation in space.  These limits are not the acts of public atheism but express a piety to a larger order best expressed as allegiance to the Sovereignty of God.  A nation as a historical territorial community is not the ultimate corporate body.  The best state creates a just order in which the deeper communal bonds of men with God and the wider bonds with other men and God can flourish. The best state protects the smaller sacred bond of marriage and family as well.   Christendom will have many professedly Christian states, and many civilized states structured within the field effect of the Christian order. These states may be grounded in Confucian, Hindu, Buddhist or Islamic traditions. Amidst the nations lives a global transcendent flourishing Church. 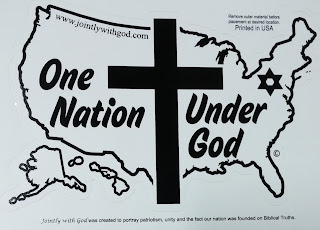 In O'Donovan's depiction of political theology based on biblical revelation there is a recurring necessary character type who employs the Word to bring order amidst national decline or collapse. The prophet plays a role in speaking clearly about his nation and bringing it back to its deepest identity and memory. This especially happens in times of sin when the nation falls from its righteous path and must be called to judgement. One man obedient to God can bring a nation to its true identity usually through speech that evokes a public memory of a sacral past or mission.

Man is meant to be reunited with God in harmony. This was the original state of humanity. Now we are being drawn back into order under the kingship of Christ who was always intended to rule the humans. But we are drawn back in the territorial communal "attention forms" of nations. The desire of the nations is to be bound together in a way that all can be fraternally and peacefully bound under the King. The search for a political order that is in harmony with other polities is a deep communal desire. Blessed are the peacemakers for they shall be called the sons of God. Unlike Social Darwinists and foreign policy "realists" Christians know and assert that men are not meant for perpetual war and international anarchy. We were created and are called for Communion in Christ under the rule of the Father. The high calling of politics is to realize the desire of the nations.

This book is not about citizenship and the nature of the political bond. It is about God calling corporate bodies into existence by acts of authority, judging them in terms of law, and sustaining them through sacral acts of memory. The ongoing relationship of the Church and these states is Christendom and the culmination of this drama will come when Christ returns to consummate His rule through the Church. Men desire to be part of some communal body undertaking a mission of meaning and purpose. We are hard wired to build nations as sacred covenants participating in a great Drama. Let us build the Body of Christ. Let us baptize the nations. Let us bring the tranquility of order among all nations still desiring to live in peace under Providence.

Posted by anthropology of accord at 1:00 AM