THE WEEKLY BRIEF
THE CORONAVIRUS SPREADS

For weeks we have been hearing about the spread of coronavirus from China. South Korea, Iran, and Italy were some early nations hit by what has become a pandemic. It was only a matter of time before it reached America's shores. American sentiment regarding preparedness was mixed to nonchalant until recent days, with grocery stores now being sold out across the nation.

Today more American's are recognizing the need to figure out how best to fight this global pandemic.

The South Korea model proved to be quite effective. Mass testing via drive through stations helped identify the infected and hold back the spread. Although the US is now rolling out a similar plan, it may be too late to prevent a wide scale spread.

Italy is witnessing what happens when the virus gets out of control. Although the mortality rate is low, the great danger is when hospitals become overwhelmed with critical cases. Italy is now facing a battlefield triage situation where only the most likely to survive receive treatment. The US has approximately 35 critical care beds per 1000 people - triple the number of Italy - yet this may not be enough if a mass breakout occurs in the days ahead.

The coronavirus is twice as contagious as the flu, yet it is said that if 60% washed their hands the spread of the coronavirus would slow by 70%. Sadly, studies show that nearly 70% of men don't wash their hands after using the restroom. Men, it's time to learn how to wash your hands. Scrub with soap for 20 seconds (the length of two Happy Birthday songs).

We should also be clear that, despite what we've heard, coronavirus is not the flu. Below is a chart that compares the common symptoms of coronavirus to the common cold, the flu, and allergies. 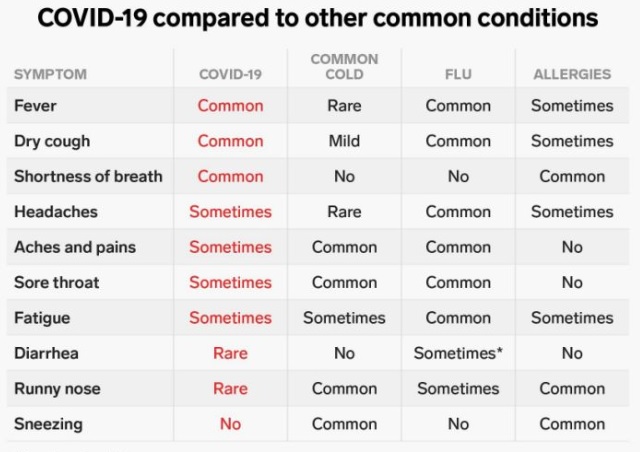 How will the coronavirus impact world affairs? Pat Buchanan has some ideas. With China hinting at cutting pharmaceutical and medical equipment exports, this may give the president further leverage to bring American manufacturing back home. If America fares better than Italy and Europe, it may provide Americans with further proof that private healthcare and free markets, working in unison with the government, are a better answer to health crises than government-run healthcare. And as Tucker Carlson pointed out, a spread among the homeless may be further evidence that liberal-run cities who prop up homelessness only make outbreaks all the more dangerous and likely.

As Americans brace for the worst, we remember the deadly influenza outbreak one hundred years ago. An excerpt from THE GREAT INFLUENZA by Tulane professor John Barry:


“The more serious the outbreak, the more important telling the truth becomes...

“There was terror afoot in 1918, real terror. The randomness of death brought that terror home. So did its speed. And so did the fact that the healthiest and strongest seemed the most vulnerable.

“The media and public officials helped create that terror — not by exaggerating the disease but by minimizing it, by trying to reassure.”

CLOSING CHURCHES? While Pope Francis is frustrated with Church closings in Italy, the head of the Polish bishops’ conference has come up with a novel solution to the novel virus: increase the number of Masses. More Mass times should lead to fewer congregants per Mass and less danger of contagion. It's a sacrifice for our priests but one well worth making.

CHURCH AND STATE: The justice department is supporting the Archdiocese of Indianapolis in its firing of an openly gay high school teacher after the gay teacher launched a suit against the archdiocese. The federal government seeks to protect the first amendment rights of religious institutions in similar cases.

INTO THE BREACH SERIES: Bishop Olmsted's outstanding apostolic exhortation, Into the Breach, has become a multi-video series with the Knights of Columbus. The twelve-minute videos can be watched here.


BIDEN EXTENDS LEAD: Super Tuesday II was held this week (March 10) and Biden was again the clear winner. Of the six voting states, Sanders won only North Dakota. Of the two candidates, Biden with 887 delegates holds a 156 delegate lead over Sanders' 731 delegates. The lead is likely to hold, but with states potentially following Louisiana in postponing their primaries, poor debate performances could keep Sanders viable.

TRUMP BREAKING RECORDS: President Trump continues to smash turn out records in his presidential re-election bid. This week he received over 637,000 voted in Michigan compared to the 174,000 votes Obama won in the same state back in 2012. More from Dr. Steve Turley.

TRUMP SUES THE MEDIA: CNN, the NYTimes, and the Washington Post are all being sued by the Trump campaign for false and libelous claims. Free speech and press were not given the protection of the first amendment so that they could be abused with lies and "fake news". Trust in the media is at an all-time low, mainstream newspapers are in decline, and even online news teeters on the brink. Even Chris Matthews has become a casualty. Trump's lawsuit may not succeed, but his lawsuit reflects the national mood regarding the media.

FIGHTING SANCTUARY CITIES: Trump the warrior advances on another battlefield: sanctuary cities. After winning in the courts, President Trump has announced he is withholding federal funds to sanctuary cities until they change their policy.


RUSSIAN CONSTITUTION: The Russian constitution is receiving amendments that protect marriage and faith in God. It also appears that presidential term limits will be reset following the passage of the amendments, thus allowing Vladimir Putin to remain in office after 2024 (potentially until 2036).

IRAQ ATTACK: Shia militias killed two American soldiers in Iraq. In response, the US struck targets across the nation. These attacks, however, killed three Iraqi soldiers, two policemen, and one civilian. When will we respect Iraqi sovereignty, and leave once and for all?

PELOSI PUSHES ABORTION: It was revealed yesterday that Pelosi sought to include abortion funding in the coronavirus bill moving through Congress. In the name of saving lives, Pelosi sought the destruction of many.

GAY CLERGY RETREAT: Archbishop Lori is allowing a retreat for gay deacons, priests, and bishops to go forward despite the protests of faithful Catholics. Let the retreat move forward - but be sure a list of attendees is published afterwards.
Posted by Andrew Lynch at 8:00 AM