SACRAMENTAL RELIEF: Pope Francis issued two declarations regarding Confession and the coronavirus. The first regards a plenary indulgence to those fighting the virus and the second extends the use of general absolution for bishops and priests in areas especially impacted by the virus.

CONVENTS HIT: The coronavirus could be particularly deadly in our convents, where the average age of a nun is 74. In Italy nearly 60 nuns at two convents have fallen ill.

REDEEMER STATUE LIT: Rio de Janeiro's 125-foot tall Christ the Redeemer statue has been lit with the flags of the nations quite literally under coronavirus siege. Unlike celebrities imagining "no religion" and "no counties" (see below), now is the time for the nations to come together in prayer as we battle against an invisible enemy. Perhaps it will remind us of our true invisible enemy: the Devil. 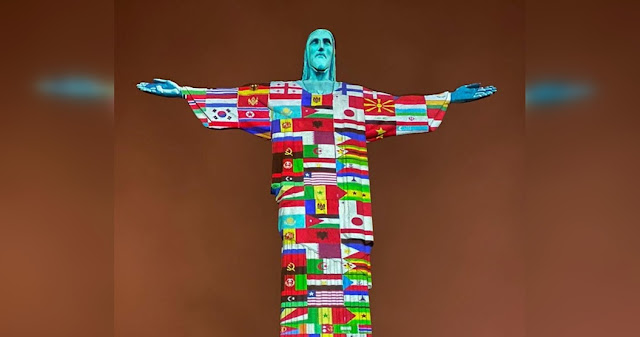 
AMERICA AT WAR: President Trump describes himself as a war time president. The impact that the coronavirus is having on the US general population hasn't been seen since the great wars of the twentieth century. Will America rise to the challenge? While geostrategist Peter Zeihan optimistically reminds us of America's past greatness Pat Buchanan is more pessimistic. Time will tell.

TRUMP'S TIME TO LEAD: Despite the loss of all the gains economic gains he's made since January 2017, President Trump has stepped up to lead the nation in this time of crisis. Recent polls now give Trump 55% approval of his handling of the virus and 56% approval overall. The virus is also giving the president the opportunity to enact much of his "America first" policy. He's closed the borders, immediately deporting illegal immigrants. He may also have support to bring back production from China.

PROGRESSIVE FAILURE: While Trump has signed to virus relief bills into law, Democrats appear to be holding up Trump's plan to give direct aid to American citizens. Democrats are also being hammered for their failure to help the homeless - who are about to be ravaged by the virus.

CHINESE VIRUS: While the President leads us during a time of war, journalists berate him for using term they themselves have used. While Dr. Steve Turley offers additional commentary, we ask: Is it really racist to identify an illness with a specific location? Is there a single journalist who says it is racist to use terms like West Nile Virus, Spanish Flu (which probably originated in China), and Middle East Respiratory Syndrome?

VOTE... OR ELSE: The DNC - with full support from Biden and Bernie - went forward with Super Tuesday III despite the CDC warnings, low turn out, and inadequately supplied voter stations. The DNC continues to threaten states who delay their votes by halving their delegate representation at the convention.

TULSI IS OUT: Tulsi Gabbard, who threw her support behind Bernie in 2016, has dropped out and endorsed Biden. After a Biden blow out on Super Tuesday III, how much longer will Bernie stay in the race?

INSIDER TRADING: Senators Burr, Loeffler, Inhofe, and Feinstsein (and at several House members) seemingly took advantage of their security briefings to begin selling stocks later impacted by the coronavirus. Their actions appear to violate the STOCK Act, the 2012 law that banned insider trading among senators and congressmen. It passed the House 417-2 and the Senate 96-3 (Senator Burr was ironically one of the three senators to vote against it). More from Tucker Carlson.

DR. ANTHONY FAUCI: Dr. Fauci has been the face of the government's response to the coronavirus. The 79 year old is working an insane 19-hour work day in his fight against the virus. Learn more about Dr. Fauci.

ISIS ON HOLD: While the DNC continued to encourage at-risk citizens to vote, even ISIS is recognizing the danger and placed jihad on hold in order to protect jihadists from infection. That certainly says something about Biden, Bernie, and the DNC.

MOSSAD RAIDS: Israel's version of the CIA is conducting raids in search of test kits and medical supplies to fight the coronavirus. It stole 100,000 test kits this week and plans to continue until it has 4 million. Meanwhile the eastern Syrians - likely Kurds - who defeated ISIS are going without test kits altogether. Could theirs have been stolen by the Israelis?

UK CHANGES PLANS: There are many ways to strategically approach the coronavirus. Containment is always the first strategy once a nation is infected - but what to do after that? One strategy is called herd immunity. The idea is that if enough are infected, eventually the community will become resistant to the disease. The UK thought about this but has since changed strategies since a new study revealed that tens of thousands would die as a result. National lock downs may be the only course of action until a vaccine is discovered.

CORONA CURE? Coronavirus fears have led to a rise of dangerous folk remedies. In Iran drinking toxic alcohol has led the deaths of 180 in two weeks while a Hindu nationalist group in India has held a cow-urine drinking event in hopes of preventing infection.

IMAGINE: Out of touch celebrity elites sang John Lennon's Imagine this week. It's not hard for us to imagine the irony of the world's wealthiest men and women imagining "no possessions" and "no hell" as the less fortunate experience hell on earth and dwindling supplies. Now is not the time to imagine "no countries" when it is precisely national borders that can be closed to the virus' spread. Imagining "no religion" when God is precisely Who we need right now is the exact opposite of what we should be doing.

COLBERT AND RACISM: The comedian Stephen Colbert accused President Trump's use of "Chinese virus" as being racist. Emily Jashinsky of The Federalist reminds us that the racism has actually come from Colbert himself.

LGBTQIA+ AT RISK: A new report worries about the impact of coronavirus among gays. One topic left out is the problem posed by promiscuity in a time where social distancing is paramount.
Posted by Andrew Lynch at 11:30 AM