The Solemnity of Saint Joseph: Husband, Protector, and Patriarch of Israel 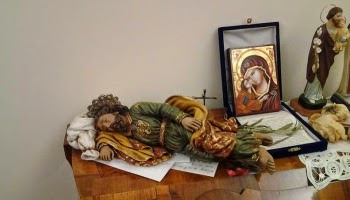 On March 19, 2013, the pontificate of Francis (the first non-European to sit in the Chair of Peter in 13 centuries) was inaugurated.  In his homily he accepted as his mission that of St. Joseph--to be custos: the protector.

It is inspiring to read of his trust in Joseph, who taught our Lord what manliness and fatherhood looked like:

"... I would like to tell you something very personal. I like St Joseph very much. He is a strong man of silence. On my desk I have a statue of St Joseph sleeping. While sleeping he looks after the Church. Yes, he can do it! We know that. When I have a problem or a difficulty, I write on a piece of paper and I put it under his statue so he can dream about it. This means: please pray to St Joseph for this problem."

Pope Francis went on to say: “In the Gospels, St. Joseph appears as a strong and courageous man, a working man, yet in his heart we see great tenderness... [Exercising the role of protector as St. Joseph did] means doing so discreetly, humbly and silently, but with an unfailing presence and utter fidelity, even when he finds it hard to understand... [The bishop of Rome] must be inspired by the lowly, concrete and faithful service which marked St. Joseph and, like him, he must open his arms to protect all of God’s people."

Joseph was the last patriarch of the Old Testament. He was the head of the household of the Lord. He is strong, virile, chaste and silent. He was the living link to King David and Bethlehem. He taught his son to love his country and he incorporated him in the Covenant rituals  of his countrymen.  He repeated the journey of the Israelites in and out of Egypt. He handed his son over on the eight day for the circumcision and naming. He took him to the temple on the 40th day and ransomed him from the death of the first born.  He saved the Virgin Mother and the Baby Savior from the murderer. He taught Our Lord the manual skills of the carpenter craftsman. He brought him to Jerusalem for the public feasts(and we are not sure he was as upset as Mary that Jesus stayed back to do some temple teaching at our Lord's own unique bar mitzvah).  Joseph is the patron of afternoon naps and a good night's sleep because that is when the angels gave him his orders. He is the patron of a good death because he was in the presence of Mary and Jesus when he died. God did not tempt him by keeping him alive for the Crucifixion of his son. We don't know what he might have done. He was not perfect. He would not have run away.

UPDATE: Two other holy men who had a deep devotion to Joseph the Worker: Pope John XXIII (see his prayer); and Josemaría Escrivá (d. 1975), the Spaniard who founded Opus Dei. In 1955, Pope Pius XII responded to the Communist celebration of Mayday as International Workers Day by Christianizing labor with a May 1 Feast Day celebrating the carpenter craftsman - St Joseph the Worker. The Communist-Socialist holiday was in remembrance of the Chicago Haymarket Massacre in May, 1886.

Father Escrivá wrote: "I don't agree with the traditional picture of St Joseph as an old man... I see him as a strong young man, perhaps a few years older than our Lady, but in the prime of his life and work." 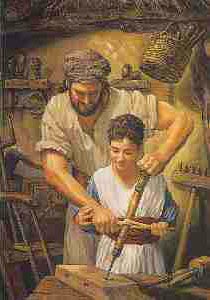