Friday BookReview: "The first nation in history to have worldwide reach" 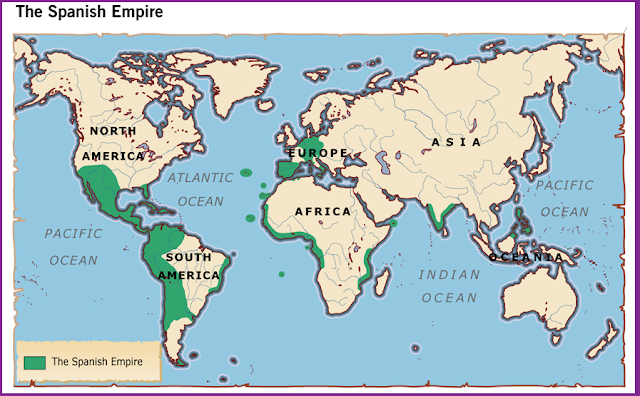 Here are excerpts from a review of Spain: The Centre of the World, 1519–1682 by Robert Goodwin, a London professor:

As every schoolboy knows, ‘the empire on which the sun never set’ was British, and ‘blue-blooded’ was a phrase applied to the nobility who ruled it for most of its history. And every schoolboy is wrong. The phrase was coined to describe the dominions of the Holy Roman Emperor Charles V (or Charles I of Spain), which were the first to span the requisite number of time zones; and ‘blue blood’ — sangre azul — referred to his Visigothic ancestors who reconquered Spain from the Moors, who had held it since 711 AD. These northern warlords would apparently show the purity of their ancestry by revealing the visible veins in their untanned forearms.

The Reconquista was completed by Charles’s grandparents, Ferdinand and Isabella, in 1492, when they finally took Granada. A few weeks later they met Columbus in Cordoba and sent him on his ultimately vastly remunerative westerly voyage to the ‘Indies.’

Robert Goodwin’s book — whose title correctly places Spain, Jerusalem-like, at the centre of the 16th-century geopolitical map — picks up events in 1519, just as the first American treasures arrived in Seville, the southern capital of Spain and sole licensee to all cargo returning across the Atlantic.

On one level this book is the story of how that treasure was spent: on pomp and on war, on the arts and the architecture to house them. And what a lot of treasure there was...

These vast riches were placed in the hands of the master of one of the most brutal and battle-hardened armies in the world at the very moment that the faith of which he was secular head was undergoing a massive schism. Martin Luther penned his 95 theses in 1517.

What distinguishes Goodwin from other historians of the period is the sheer multiplicity of his perspectives. He is erudite and concise in covering familiar ground, while full of original insight when it comes to the motives and actions of the key players...

Goodwin also has an eye for the apposite detail to illustrate his general theme. In 1580 Spain had a greater caseload of litigation in its courts than the United States did in 1970, yet had a 20th of the population. This endless recourse to law across all social classes was the direct result of a system of legal aid so comprehensive it almost ground this global empire to a halt. 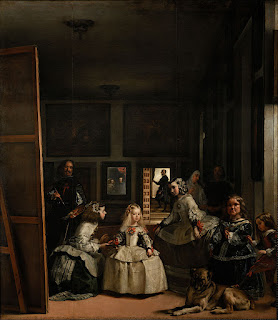 However, Goodwin’s real interest shines through in his description of the art and literature of this golden age, and he offers a detailed analysis of many great works, from the famous — such as Don Quixote, Cervantes’s postmodern take on the picaresque, and ‘Las Meninas,’ Velázquez’s masterpiece of misdirection and reflection [above] — down to lesser-known masterpieces such as Francisco de Zurbaran’s vivid ‘Christ on the cross’ and Juan de Valdés Leal’s terrifying ‘In ictu oculi’...

The most notable effect on this reader was an urge to return to Spain, especially to Goodwin’s beloved Seville, that ‘deeply religious and very beautiful provincial backwater’, with ‘its quiet lanes and courtyards’, its ‘grand monuments’ and its ‘ghosts’. After all, it is not enough to bring truth to history. One must also bring life — and this book has it in golden abundance.

From an interview with Professor Goodwin --

"Centre of the World"? Really?

Yes. I’m going to quote my book here: “On Halloween, 1519, a lone carrack [large merchant ship] reached the shores of southern Spain and sailed up the Guadalquivir, the Great River of the Moors, to Seville, capital of Andalusia, a region known to medieval Arab poets as paradise on earth. The first ship to reach Europe from the newly conquered coast of Mexico, the little Santa María had 'so much gold on board that there was no other ballast than gold,' or so it was reported to King Charles. At that moment, the modern Western world was born and globalization began”...

The great thing about Columbus was not so much that he reached America, but that he came home with the news.

So your book is about Spain as the centre of this globalising world. How were Spaniards affected by all this money?

During the 1500s Spain was held together by a relatively strong crown and perhaps the most fascinating consequence of that combination of grass-roots chaos and an overall sense of order is that Spaniards became one of the most litigious societies in history. They trusted their courts because of the strong crown, despite some cases lasting for generations (Columbus v. the Crown, begun in 1510, was eventually settled in the 18th century) and levels of corruption that seem astonishing to us. (An advocate was struck off in the 1550s after he was discovered to have accepted instruction from both the aristocratic plaintiff and the powerful municipal defendant.) But illiterate peasants and even slaves also went to court and they did not just sue each other, they also took on their lords.

Another massive structural social consequence was the growth of education and universities, the institutions needed to train so many lawyers and the officials who administered the empire abroad and the government of Spain at home. This led to considerable social mobility. Where there is education, there is also intellectualisation. So in a world we usually associate with the Inquisition, there is perhaps no better example of independence of thought than the School of Salamanca, a group of theologians and jurists who sowed the seeds of modern international law and human rights on the fertile soil of Catholic faith.

The Inquisition still happened, of course.

Yes. But there was enlightenment too. The Habsburgs were deeply troubled by the rise of Protestantism and Spaniards came to dominate the Counter-Reformation. On the one hand it encouraged religious intolerance generally and specifically gave the Inquisition raison d’être after it had run out of steam in the 1520s. On the other, it gave impetus and focus in art, both high religious art like that of El Greco or Murillo, but also popular art, most obviously manifest in the fluoresence of Holy Week, Semana Santa, which survives today. 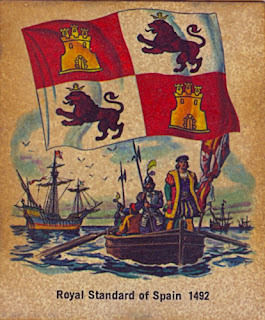 So all that money was partly invested in culture?

So far as Spanish culture goes, this was the period known as the Golden Age. There is a fascinating intersection of the twin influences of religious devotion and the kind of moral and existential self-questioning displayed by the Salamancans and their monarchs, that produced some of the most brilliant poetry, theatre and literature to sit alongside the beautiful paintings of Diego Velázquez... .

But unquestionably the greatest figure of this world of belles lettres was Miguel de Cervantes, who drew on his experience travelling the length and breadth of Andalusia as a tax-gatherer to write "Don Quixote." It was not simply the first modern novel... but the very rise of the novel to its supreme form in 18th-century Britain is unimaginable without Cervantes showing Defoe, Swift, Sterne and Fielding the way. Mark Twain as much as admitted that there could have been no Moby Dick without Quixote and Sancho.

The intersection of novel experience and religion led Spaniards to question every aspect of reality itself. They had a name for this phenomenon, this strange crisis of faith; they called it 'desengaño' or disillusionment and they sought the experience of a sudden revelation of the real beneath the imaginary at every opportunity. And desengaño could be divine. The great art critic, Antonio Palomino, wrote in the early 1700s that Martínez Montañés had created the breathtaking image of the Christ for the leading Seville Confraternity of the Passion, “with such an anguished expression that it excited the devotion of even the most lukewarm heart and it is said that when they carried this sacred image in procession during Holy Week, the artist himself exclaimed it was impossible that he should have made something so wondrous and realistic.”

UPDATE: Take a look at our earlier post about Spain (and its map).