"The pivotal day in my life as a young reporter,” [historian Robert] Caro recalls, was when he was covering the state capitol in Albany. There was a proposal to build a bridge across Long Island Sound, a project which virtually no one favored, because it would increase pollution and congestion. But, Caro remembers, the news was whispered through the capitol that Robert Moses was there, and “the next thing I knew everybody from the governor on down was for the bridge. I saw I didn’t know how anything works." 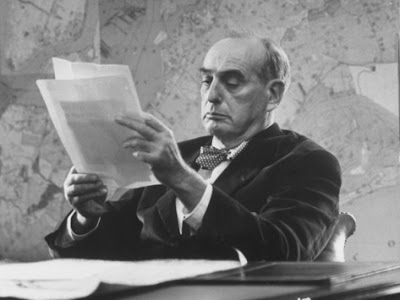 From a review by the president of Harper's magazine of Robert Caro's study of urban planner Robert Moses (1888-1981):

It is something of a mystery why the Bodley Head has decided to publish Robert Caro’s The Power Broker in Britain more than 40 years after the initial appearance in the US of this classic work — but better late than never. Caro’s remarkable portrait of New York City’s master planner Robert Moses merits publication in any language, at any moment in time. For its scope extends beyond Moses, fascinating though he was as a person, builder, wrecker, and manipulator of men and money.

Caro’s ambition — in a journalistic sense equal to Moses’s ambition in architecture, park creation, and road and bridge construction — is greater than conventional biography. Over 1,200-odd pages, with immense precision and considerable verve, Caro aims to describe the essence and pathology of Moses’s political power, not just the uses to which he put it or how he got away with the worst of his bulldozing, both physical and political. So we learn as much about the intoxication and addiction of power as we do about the bureaucratic titan whose imprint on New York bears comparison with his only modern equivalent, the smasher and rebuilder of Paris, Baron Haussmann.

Unfortunately, New York today remains ugly, congested, and harsh compared with Paris, and the tactics Moses employed to transform the city, adjacent Long Island, and upstate New York to suit his tastes were uglier still. Thus any assessment of Moses’s legacy, or potential revision of Caro’s devastating critique, must include the question: did Robert Moses make New York a better or a worse place to live?

Caro demonstrates that he made the city and the surrounding state much worse... though he can’t help acknowledging successes like Jones Beach State Park, Moses’s first big public-works project, which was constructed in the late 1920s on the South Shore of Long Island.

This vast refuge for the sweltering masses exists, in part, because the Yale and Oxford-educated Moses began his career as an earnest, idealistic reformer, very much in the mainstream of Progressive Era thinking. Principally interested in the reform of government administration, he wrote his Oxford PhD thesis on the British civil service, and upon his return to New York he campaigned for the elimination of patronage appointments by political bosses.

But, as Caro recounts, Moses at Oxford shortly before the first world war was already exhibiting the arrogant elitism that would mark the rest of his life, no matter how public-spirited his projects purported to be: ‘What Moses admired’ in the British administrative system was its rigidity and segregation — ‘that it had two separate and distinct classes’ of chiefs and drones. ‘The competition Moses wanted [in civil service exams] was a competition open only to a highly educated upper class.’

Good intentions, such as they were, didn’t get Moses anywhere back home, and he despaired of beating the political professionals at their own game. That is, until he attracted the attention of Belle Moskowitz, a pragmatic reformer who had allied herself with New York governor Al Smith, a brilliant machine politician with an eighth-grade education. Smith was just the sort of talented poor boy that the well-born Moses wanted to exclude from meaningful government service. But when Moses realised that Smith, a pure product of Tammany Hall, could guarantee him a pathway to power through park-building, he threw all his enormous energy, intelligence and charm into befriending him.

The Irish-Catholic Smith protected and promoted the secular-Jewish Moses because huge, contentious park projects made good politics, especially when the press presented these projects as clashes between an oppressed working class, desperate for greenery and fresh air, and land-hogging robber barons devoted to preserving their privacy and privileges. Moses had no formal legal training, nor had he studied engineering or architecture. But he was the quickest of studies in the laws of appropriation and eminent domain, trial tactics, bill drafting, public bond issues, and the short and long-term political effects of pouring concrete.

And he was a ruthlessly adept political infighter, propagandist, and dispenser of patronage himself. Until 1962, when his command of the two main state parks administrations finally ended, he ruled almost unchallenged in the realm of public construction and urban renewal in the commercial and cultural capital of the United States. Having expanded his influence far beyond the preservation of open space — by controlling the boards of public, bond-issuing ‘authorities’ like the one governing the Triborough Bridge — Moses intimidated and outlasted a succession of governors and mayors, who came to fear him as much as they needed him to get the big jobs done.

But the big jobs, especially road-building, were a brutal business that defaced and constricted New York forever. As ‘America’s…most vocal, effective and prestigious apologist for the automobile’, Moses also influenced other cities, as he had New York, to chop themselves up with expressways and starve desperately needed public transport for generations to come.

Ironically, it was a patrician adversary, W. Kingsland Macy, who first seems to have recognised the danger Moses posed to the ordinary people he pretended to champion. Responding to the Long Island State Park Commission’s blatantly illegal seizure of a millionaire’s hunting preserve, Macy warned that if Moses prevailed, ‘No one’s home is safe.’ Little did Macy know that in future decades Moses’s expressway construction and ‘slum clearance’ would uproot, displace, and demoralise at least half a million low-income New Yorkers, predominantly black and Puerto Rican, who had none of the influence and money of the wealthy Long Islanders.

Moses’s Cross-Bronx Expressway also destroyed the working-class and largely Jewish East Tremont neighbourhood, and it’s in these chapters that Caro most vividly exposes the gratuitousness, the sheer cruelty of Moses at his darkest. The one mile of roadway that did the most damage, that stabbed the heart of East Tremont, could easily and inexpensively have been shifted to a less intrusive route than the one selected by Moses. As Caro writes, ‘Democracy had not solved the problem of building large-scale urban public works, so Moses solved it by ignoring democracy.’ But with his ‘dictator’s powers’, Moses wasn’t, like some other dictators, merely concerned with constructing enormous edifices. He was a sadist who enjoyed his powers —

"for using them gave him what was his greatest pleasure: the imposition of his will on other people…. He didn’t just feel that he had to swing the meat axe. He loved to swing it."

Caro has moved on to writing the definitive biography of Lyndon Johnson, for which he is justly lauded. But sadly, his detailed reporting and rhythmic prose, his great acuity for understanding and describing the nuances of politics and power, seems to be going out of fashion. He has no contemporary rivals, and perhaps only a few imitators. It’s worth noting that he learned the reporter’s craft on 'Newsday,' the once-excellent Long Island daily, and not on the 'New York Times,' so often the handmaiden to Moses’s most grandiose projects — projects that aggravated traffic jams while they enhanced Moses’s political sway through toll-collection on bridges and tunnels and by the judicious awarding of insurance business.

A couple of years ago, I ran into Caro on Central Park West, where we both live, and we chatted about the hideous high-rise luxury apartment buildings sprouting up on West 57th Street, now visible from a great distance to the north. I asked him why the then mayor, the billionaire Michael Bloomberg, got such easy treatment from the press, despite his terrible laxity on zoning and his excessive tolerance of the super rich. ‘I think everybody gets a pass nowadays,’ Caro said. I think he’s right.


"I was so angry at Robert Moses. He dispossessed five thousand people from one block -- elderly Jewish people -- to build the Cross-Bronx Expressway. When I interviewed these people, I’d ask them, ‘What is your life like now? ” And they’d say, ‘Lonely.’ And in my experience, that’s a word people don’t say unless it comes from deep inside. One evening I went to interview Moses and asked him if he thought these people were upset. He said, ‘No, there’s very little discomfort. It was a political thing that stirred up the animals there.’ I wanted to punch him in the teeth."