The Physical Ecology, Communal Loyalties, and Geopolitics of Japan 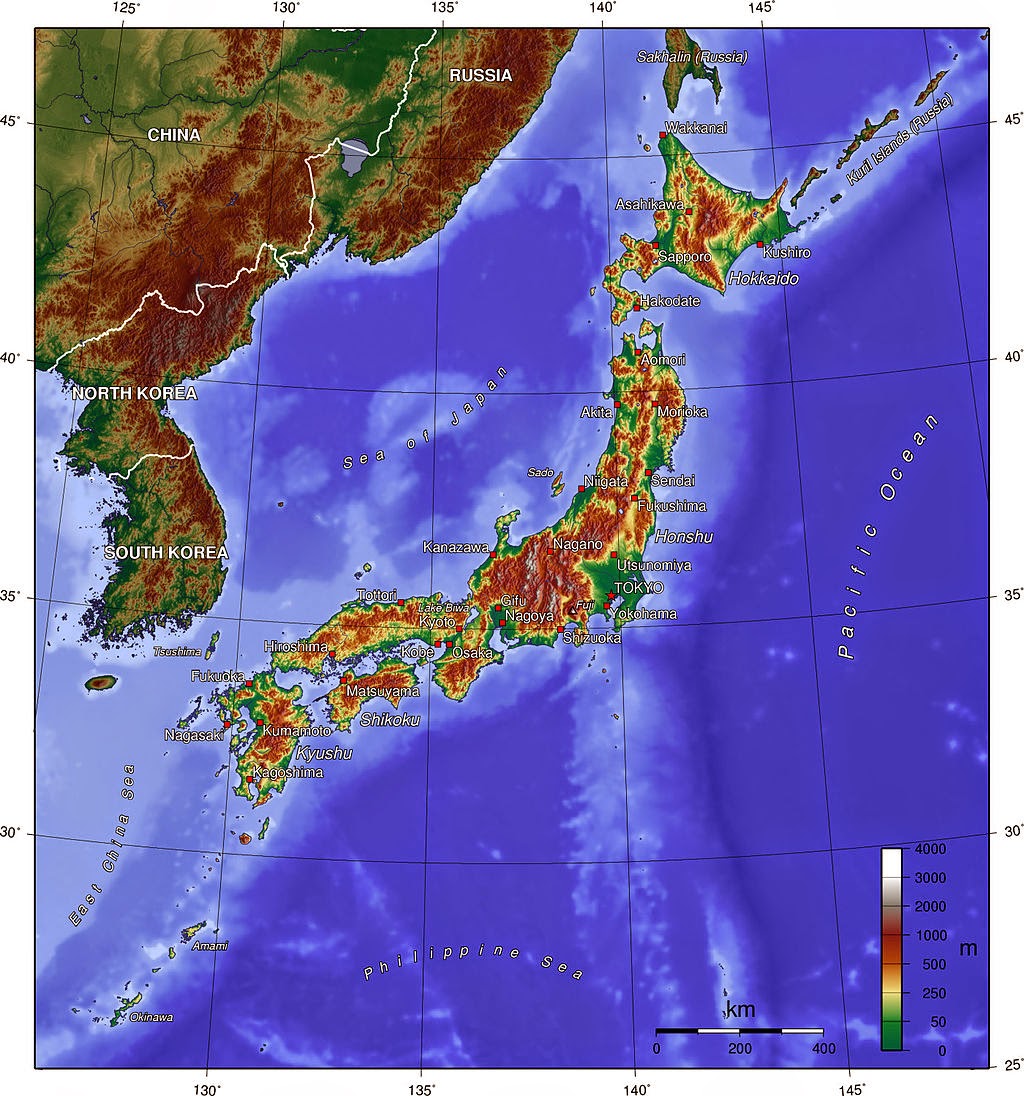 The island nation of Japan is composed of four main islands: Hokkaido, Honshu, Shikoku, and Kyushu. Japan also stretches southward through the Ryukyu Islands. To Japan's north are the Kuril Islands - claimed by both Japan and Russia. Japan's physical geography generally orients it towards the Korean peninsula and Russia to the west and north (which taken together forms a perimeter around the Sea of Japan), and the Pacific Ocean to the east and south. Honshu, where the capital of Tokyo is located, is slightly larger than Great Britain, the second most populated island on the planet after Java, and the seventh largest island in the world. About 60% of Japan's population lives on Honshu. Japan has very few natural resources and with its forested and mountainous terrain, only 12% of Japan is suitable for agriculture. Japan is the world's largest importer of coal and natural gas and the second largest importer of oil.

At 871 people per square mile, Japan is one of the most densely populated nations in the world, ranked fourth behind Bangladesh (2,840), India (999), and the Philippines (873) among nations with populations above 100 million.  At the other end of the spectrum are the United States (84.5), Brazil (62), and Russia (22). In addition to its issues of population density, however, Japan faces another demographic problem: an aging population. Over one quarter of Japan's population is over the age of 65 and sales of adult diapers in Japan are eclipsing those of infants. Language in Japan is split between Japanese language spoken on the main islands and the Ryukyuan languages of the Ryukyu Islands, the latter becoming endangered due to the spread of mainland Japanese throughout the islands. Kanbun - or classical Chinese - also played an important linguistic role in Japan. Akin to Latin in Europe, many classical, intellectual, and official works of Japan were written in Kanbun and the language remains a mandatory subject in Japanese secondary schools. Religion in Japan is dominated by folk Shintoism (52% of the population) and Buddhism (35% of the population). The non-religious population comprises 7% of the population while Christianity stands at less than 3% (compare this to nearby South Korea where the nation is almost 30% Christian and rising). The Shintoism of World War Two Japan was a mystically powerful combination of religion and racism which all of us must learn from.

Japan's geographic orientation towards the Korean peninsula and Russia brings Japan into potentially confrontational contact with its peninsular and continental neighbors. While much media attention is given to North Korea, the dispute of the Kuril Islands has kept Japan and Russia from signing a peace treaty since the end of World War II. A 2012 poll of Japanese revealed that, with a 72% unfavorable view of Russia, Japan was the most Russophobic nation surveyed at the time. Japan's past history with South Korea and China, particularly during the days of Imperial Japan, leave her in poor standing with both today. The rise of China, however, has led South Korea and Japan to move more closely towards military pacts (both have security agreements with the United States). Where the Japanese islands - numbering 6,852 in total - face China are in Kyushu and the Ryukyu islands (of which Okinawa forms the southernmost bastion). These islands play a key defensive role in containing any potential Chinese military aggression while also denying Chinese fleets entry into the Pacific. As Prime Minister Shinzo Abe seeks to bolster Japan's armed forces, a defensive strategy such as this is one of his options. Japan also play an important role in the geopolitics of the South China Sea.

Stratfor - short for Strategic Forecasting, Inc. - is a private global intelligence company that offers geopolitical insight into the interplay of nations. Stratfor has developed an excellent series of short (~2-4 minute) videos which provide the viewer with a specific nation, along with its basic history, geography, culture, and geopolitical allies and adversaries. In the following video, they present the geographic challenges facing Japan.

For more information on Japan, visit its page on the CIA World Factbook along with our Friday Book review on Japan - the first great modern Asian nation.


This post originally appeared on Anthropology of Accord on March 2, 2015.
Posted by Andrew Lynch at 6:00 AM