THE POPE AND THE PRESIDENT - TWO PEACEMAKERS WHO SEE RUSSIA AS BROTHER, NOT FOE: The Moynihan letters 25 and 26 provide a Church-wide view of international issues that mutually concern the president and pope. Global warming and specific immigration policies may not be at the top of their real agenda. Pope Francis is a pope of global Christianity and humanity. President Trump wants to bring peace and diplomacy back into international relations in a way neocon Republicans and liberal interventionist Democrats have opposed since the end of the Cold War. Both the pope and the president want to end the rupture with Russia that divides Christianity and the Christian nations. It is the big things that hysteria misses.

An excerpt from Robert Moynihan: "But we also know something else quite important -- that the Pope-Trump meeting was followed by a second meeting, a meeting that went longer, about 50 minutes. And the second meeting may very well have been more important, in some ways, than the first." The Americans met with the Vatican's two top diplomats.

PROFILES OF THE VATICAN DIPLOMATS (FROM MOYNIHAN LETTERS): Cardinal Pietro Parolin, the Secretary of State (below in the the Cortile San Damaso), and Archbishop Paul Richard Gallagher. 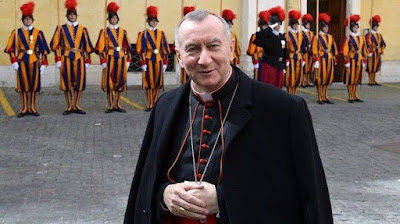 Cardinal Parolin (above) is a 62-year-old Italian. He is a career Church diplomat and speaks native Italian, fluent English and French, and near-native Spanish. He is an expert on Nigeria (he served for three years in the Nunciature in Nigeria, where he became familiar with the problems in Christian-Muslim relations) and Mexico (he served another three years, 1989–1992, in the Nunciature of Mexico; during his time in Mexico he contributed to the final phase of the extensive work begun by Archbishop Girolamo Prigione which led to the legal recognition of the Catholic Church in 1992 and the establishment of diplomatic relations between the Holy See and Mexico). He is also an expert in the process of negotiations for a global nuclear test ban treaty, and for eventual nuclear disarmament (Parolin was for years the Vatican's representative to the Vienna nuclear arms treaty talks). And he is an expert on Vietnam, and on Venezuela, where he was most recently the nuncio. Finally, and not least important, Parolin is so well-respected that some speak of him as a possible candidate to be... the next pope. So, in meeting with Parolin after meeting with Francis, Trump may have been meeting with the next pope, after meeting with the present pope... 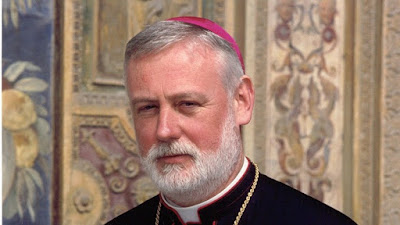 And then there was Gallagher... Archbishop Paul Richard Gallagher (above) is a 63-year-old British prelate from Liverpool. He is the Vatican's Secretary for Relations with States, which makes him more or less equivalent to the Vatican's "Foreign Minister." He has held posts in Tanzania, Uruguay, the Philippines, and at the Council of Europe in Strasbourg. He is a calm, thoughtful man with a global vision - the type of man who might emerge one day as a... Vatican Secretary of State himself.

FOR THE AMERICANS: The Jesuit magazine, America, answered the question we were most interested in. Which Americans met with the diplomats profiled above: "After the papal audience, a Vatican official accompanied the president and his top advisors, Mr. McMaster, Secretary Tillerson and Mr. Kushner, for private talks with two of the pope’s most trusted senior collaborators: the Italian-born secretary of state, Cardinal Pietro Parolin, who is Francis’ right-hand man, and the secretary for relations with states, Archbishop Paul Gallagher, the first Englishman ever to hold that post. They talked together behind closed doors for 50 minutes, suggesting they went into the issues in considerable depth."

CATHOLIC CONSERVATIVES REBUKE THEIR FATHER: The Literary Editor at First Things is a young man - Matthew Schmitz. When he is confused, he is considered nuanced. But about Pope Francis, his days of nuance are over. "Though Benedict is still living, Francis is trying to bury him." Catholic intellectuals of the English-speaking conservative stripe seem more and more removed from the Global Christianity and nationalist civic movements that mark our era. The American nationalist Trump and the Argentine Pope of the Global South apparently have no claims on their filial piety. These fathers seem to ignite a spirit of rebellion and disdain from "the public intellectuals."

THE MANCHESTER BOMBER: In Paradise or is his soul condemned? That is the question a thousand other potential bombers need to have answered. That strikes at the heart of the religious motivation. If you murder Shiites or People of the Cross are heaven and 72 virgins waiting? Or are you an evil loser who is headed for the lonely abyss of Hell? How those questions are answered will determine the rookie jihadist class of 2017. Here is a typical article about the bomber's Profile. There is a lot here that is helpful. What is missing? All his contacts are Salafist Sunnis - some fighting the Shia government of Iraq, others fighting in Libya. We're getting better at saying who we are fighting -but we're not there yet.

COPTIC CHRISTIANS KILLED - WHAT SHOULD WE PRAY FOR? Coptic Christians from Egypt were stopped on a bus going to pilgrimage and were summarily executed. Do we pray for an end to violence or the establishment of armed order? The Ordered Loves of Christianity and civilization include effective civil authorities that prevent murder.

THE VERY SORRY STATE OF CATHOLIC CONSERVATIVES ON ISLAM: At The Catholic Thing a Mr. Howard Kainz is given space for his peculiar message: Islam is just a cult - don't treat it as a religion. Are we supposed to consider this habitually anti-Pope Francis site as an authentic Catholic way? This piece is not hateful as others have been. It is historically infantile - an embarrassment in a dangerous world. The major voice about Islam on conservative Catholic websites is William Kilpatrick. Here is our review of his interesting flawed book on Islam, Atheism, and Christianity. Mr Kilpatrick is inherently hostile to Islam, and seems incapable of making distinctions about the schools of law or traditions within Islam. That this passes as Catholic intellectual life is befuddling. The Catholic universities with their watered down theology departments are certainly more sophisticated in their treatment of Islam than the "more orthodox than the pope" crowd at Crisis, Catholic Thing, EWTN, and Catholic World Report. There is a serious breakdown in public Catholic discourse as a repetitive perfectionist sexual ethic is asserted for the laity, a scandalous homosexual clerical culture is willfully ignored, and God's rule among the nations seems a subject beyond the pay grade.

KEEP THE EUROPEAN UNION BY TURNING TO THE EAST: Peter Rieth.

THE PRESIDENT AND THE MEDIA - THE HYSTERIA HAS A PURPOSE: Victor Davis Hanson.

THE DEATH OF ZBIGNIEW BRZEZINSKI: He was a major force in the defeat of the Soviet Union. His The Grand Chessboard is a rare American treatment of strategic thinking centered on the landmass of Eurasia. The Cold War bifurcated the allies of WWII into a bipolar world as enemies. The high-level strategic partnership of President Jimmy Carter and NSA director Zbigniew Brzezinski was crucial in the eventual demise of the atheist superstate. It was the supposed "weak and pusillanimous" Carter Administration which initiated the alliance in Afghanistan that delivered the military defeat of the Red Army needed to bring down Communism. We salute the American soldiers who held back Communist armies in Korea and Vietnam. We salute the Nixon-Kissinger China alliance. We salute the Ronald Reagan-Pope John Paul-Mikhail Gorbachev final act. We salute the Baker-Shevardnadze reunification of Germany. But let us remember none of this would have happened without the strategic insight of a group of old-style Democrats who made an ally of fighting Islam to beat the godless Communists. God bless Mr. Brzezinski. May he rest in peace. Blessed are the peacemakers for they shall be called the sons of God.

MEMORIAL DAY: Watch Secretary of Defense Mattis' brief remarks from this year's service at Arlington Cemetery. At bottom of entry on masculine publics and family weekends.