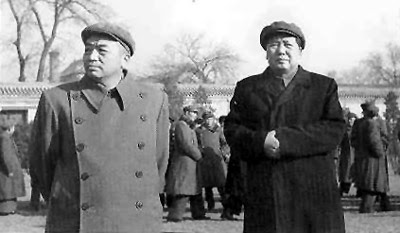 Peng Dehuai was a prominent military leader who served as China's defense minister in the late 1950s. Both he and Mao [pictured] were born in the province of Hunan.

He was the leader of the Chinese forces in the Korean War -- and was the one who informed the Chairman that his 28-year-old son, Mao Anying, had been killed in a U.S. air strike.

Later, "appalled by the suffering caused by the failed Great Leap Forward campaign [1958-1962] and other radical policies, Peng came into conflict with Chairman Mao and this led to his eventual downfall."


From a book about the Cultural Revolution by Dutch historian Frank Dikotter:


"In December 1966, Peng Dehuai, the marshal who had confronted the Chairman over the famine at the Lushan Conference in 1959, was hunted down in Sichuan and brought back to Beijing by a team of Red Guards acting on orders from Jiang Qing [the wife of Mao].

Peng's ordeal was predictable... [H]e was dragged out of prison to face interminable struggle meetings. One bystander remembers seeing him in an open lorry, surrounded by Red Guards. He was attempting to keep his head defiantly high, but a puny student kept on hitting him on the neck, trying to force him to bow in submission.

'I watched with horror. Here was a man who had fought all his life for the revolution, a man whom everyone in China knew, almost as a legend. If even he had no protection in this anarchy, then what of us ordinary people? I felt myself choking and I wanted to cry.' "


Peng Dehuai was sentenced to life in prison, where he died a couple years before Mao. Later, when Deng Xiaoping came to power, he rehabilitated the general's reputation. Today, this statue stands in Peng's hometown. 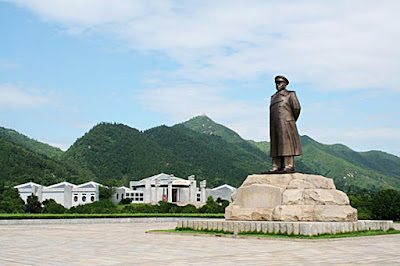 The longtime personal physician to Chairman Mao -- Li Zhisui -- summed up Peng Dehuai: "He was the frankest, most honest man on the politburo, the only top leader who consistently dared to confront Mao. He accused him of behaving like an emperor, with a harem of three thousand concubines..."

UPDATE: Another of the billion-and-one sad tales of Maoist China:


"[In the late 1940s] the chief of protocol had suggested that Chairman Mao conform to international convention and wear a dark suit and black leather shoes. He was fired. He subsequently committed suicide during the Cultural Revolution."